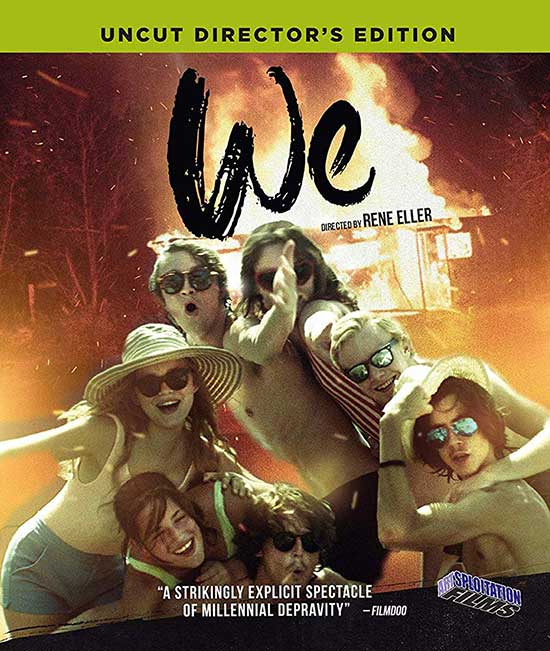 Eight teens – four guys and four girls – are the best of friends. One summer, out of boredom they experiment with all manner of new means to entertain themselves. This degenerates into some extreme behaviour and will lead to tragedy.

Based on the controversial novel by Elvis Peeters (see also: Fallow), We (or Wij: A Summer Odyssey in Four Parts) is the debut feature film for Dutch director Rene Eller, who got his start in television, then moved on to music videos once MTV hit Europe. Starring mostly unknown, fresh-faced young actors (much like Kids, and this is not the last time a comparison to Larry Clark’s films will be made) and said to be based on true stories, We tells the tale of one fateful summer when eight friends decided to throw caution to the wind and got out into the real world to just live. And much like we’ve learned from so many other coming of age films, newfound autonomy often goes hand in hand with bad decisions, and along with those bad decisions so often comes bad news. But in this case, that’s putting it very mildly.

We premiered in the Netherlands at the Rotterdam International Film Festival back in January of 2018, but thanks to Artsploitation Films, who seem to have a knack for finding unsettling films from all over the world, it is now (as of February, 2020) finding its way into American DVD players as well. This movie is set up as one story told in four sections by four separate narrators, each person relating their own version and each piece essential in painting a full picture. The details each character gives also help to more clearly show their individual personalities. For example, first up is Simon (Tijmen Govaerts), a generally positive young man from a good family. His delivery of the story is tinged with innocence and young love, telling of eight teenagers who wanted to explore the world.

On the other hand, Thomas (Aime Claeys) is a troubled youth who has issues at home which may have affected his outlook on life, not to mention other potential traumas he may or may not have endured as a child. His version of the story closes out the film and tells of a turbulent summer full of torment and abuse at the hands of a local politician. In between, we hear from Ruth (Maxime Jacobs), a headstrong but self-conscious young woman who feels trapped at home, and Liesl (Pauline Casteleyn), a rebellious, tough, angry artist who seems to feel she’s better than the others. By the end, we haven’t been presented with a neatly wrapped up package, but instead a story colored by different perceptions and viewpoints and a collection of facts skewed by strong emotions, leaving it up to the audience to decide how we interpret the details. But one thing is certain: none of these kids will ever be the same again.

We is an impressive movie, especially for being the director’s feature debut. These teenagers live in a world similar to that created by Harmony Korine; despite their surroundings, they are very much on their own, many for the first time, and are indulging their ids whole-heartedly. When Kids was released, the denial was strong with the baby boomer generation, many of them trashing the film as unrealistic and denying that teenagers would act in real life as they are depicted on the screen; Spring Breakers took it a step further by showing attractive, well-to-do young women, former child stars from Disney, indulging in the darker side of life. We resides in the same reality, and the parents of the four boys and four girls in We are the same ones denying that their teenagers would ever mirror the teenagers in Korine’s films. These parents forget that the world their children live in is a world which they’ve helped to create, and so their children’s need to navigate it as they do often falls right back on them.

To give away too much could spoil some of the shock of We, but suffice to say, there are quite a few upsetting and uncomfortable moments interspersed throughout the story of these eight kids’ fateful summer. Eller never hesitates to show us the ugly side of things, often graphically. Much like Larry Clark’s Ken Park, there is explicit sex and graphic violence in a number of scenes, always teetering on the line between art and exploitation, especially considering the age of the characters. Due to the structure of the film, we know some details of the climax up front, in the first quarter of the story, but Eller is careful to slowly parse out information, leaving the audience’s gasps intact when the full story is finally revealed in the last section. There was a great team working behind the camera here, including cinematographer Maxime Desmet and editor Wouter van Luijn (who tragically passed away in 2018), who won the Golden Calf award for best editing for his work on We. In fact, the film netted quite a bit of recognition, including the 2018 Rome Independent Film Festival Jury Award for Best Film along with Best Director at the 2018 Raindance Film Festival going to Eller.

We sets the bar very high for first-time feature director Rene Eller – the story is great, it is shot well, the acting is great, and there are just as many warm moments as there are shocking ones. This isn’t a universal coming of age story – neither is Kids, or Stand By Me, or Son of Rambow, for that matter – but it is one that shows us an insight into the lives of people we’ve met along the path of our own stories. Eller has delivered a dark, upsetting film that instantly puts him into the same conversation as Larry Clark, Harmony Korine, and Todd Solondz as a phenomenal director who can show the ugly side of life with an artistic quality. Highly recommended!

We  (Wij) is now available on blu ray per Artsploitation Films