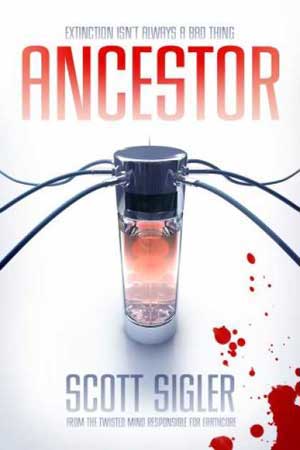 Scott Sigler’s 2007 novel, ANCESTOR, was originally produced exclusively in audio format and, at that time, became the world’s most-popular “podcast novel”. A serialized audio book delivered in 20 weekly episodes played to an initial audience of more than 30,000 fans and has been ultimately downloaded by more than 700,000.

Regrettably, the transition from podcast to novel format does not present nearly as exciting a picture. While being far from the late Michael Crichton in technical and medical knowledge, Scott Sigler does do an admirable job of presenting the science fiction behind ANCESTOR. The novel deals with the subject of xenotransplantation – using animal tissue to replace failing human organs. In this novel, the fictional biotech firm, Genada, has a scientific research team headed by Dr. Claus Rhumkorff that is seeking to recreate the ancestor of all mammals. If he is successful, their research will save over a half-million lives every year.

The science involved in such a process, however, is not without controversy. In creating a mammal with human internal organs they must envision and produce a creature that none of them has ever seen and that existed long before recorded history. The most talented and creative member of Rhumkorff’s research team is the Chinese female scientist known simply as Jian. While the team continues to experiment and fail with creation an ancestor embryo, Jian thinks out of the box. She determines that by developing a template of human DNA they would not succeed. What was needed in this situation was the use of a human host, specifically herself, that would allow for successful implantation of the embryo they sought to create.

While the research team is proceeding with implanting these newly created embryonic fetuses into several cows several other scenarios are taking place. As expected, there is a security staff on constant alert to prevent corporate espionage from their competition and particularly to be on the lookout for any internal spies. Even though the research is taking place on a remote island in the middle of Lake Superior, potential threats to the project still exist. We are introduced to the members of this security team who take their leads from the heads of Genada, brothers Dante and Magnus Paglione. Dante is the brains and Magnus, at 6 foot 8, the brawn. Additionally, a spy is indeed in the group in the form of a CIA operative going by the name Teyshawn.

A plane with members of the research team and all of the ‘impregnated’ cows is sent out. However, due to the CIA leaking of the research and other security risks, Genada makes the difficult decision to scrap the entire plan and blow the plane up mid-flight. Of course, this plan is sniffed out and instead of being destroyed, the plane flies back through a blizzard to crash-land on the same island in Lake Superior that they left. The experimental cows are set free and found by a local farmer who puts them in a stable with his own livestock. When the new cows appear to be sick, the farmer grows concerned – not realizing that these were the same experimental animals that were to have been destroyed in the booby-trapped plane off the island. Alas, he is too late to do anything about it as the lethal fetuses rip their way out of their bovine hosts and prey upon everything in sight. It turns out these ancestors are not the harmless mammals that were intended but instead a pack of savage, prehistoric creatures with an insatiable appetite and the ability to grow larger with every meal!

If only the novel were half as exciting as this description! For a 227-page novel, the actual action of the ancestors making their violent appearance does not happen until around page 160. For fans of action/thrillers, this is far too long a time to wait for a pay-off. In the final 60 pages or so, Sigler packs in as many horrific and gruesome deaths as possible as the wild pack of seemingly endless and indestructible ancestors run wild on the remote island. The surviving members of the plane crash, along with a few of the staff and security team that were not part of the Paglione’s plot, attempt to leave the remote island in the middle of a violent blizzard while being hunted by their deadly creations.

Scott Sigler had written a successful novel, EARTHCORE, prior to ANCESTOR, and has since gone on to pen INFECTED and CONTAGIOUS. I have not had the opportunity to read these other novels but understand that Sigler has built a following of cyber-punk fans that enjoy his work. ANCESTOR is no JURASSIC PARK and does not succeed as a novel. The characters are thin – most given little to any background biography – and rarely are they even referred to in full names. I can see how this format was appealing for the more imaginative podcast format – but avid readers who enjoy fast-paced and exciting sci-fi thrillers will be disappointed by the print version of this effort.