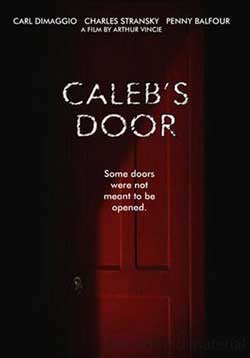 Plagued by nightmares of a cloaked figure who wants to do him harm, ex-Marine Caleb returns to his hometown in hopes of figuring out the source of his mental unrest. But instead of finding answers, he’s left with a new set of disturbing questions. Why is the parish priest Caleb’s always looked to for guidance now struggling with his own faith? Why are his dreams getting increasingly worse and coming true? Arthur Vincie directs this thriller.

“Caleb’s Door” is an interesting film. Part drama, part horror, the film is mostly about a man’s personal journey to find his way. A way to seek out the demons that are haunting his dreams, to learn their secrets, and to move forward in life leaving the past behind. I watched this film on the wrong, or maybe it was the right, day when I feel lost or confused, making me stop and think about where I am, where I want to be, and how to get there. Writer/director Arthur Vincie is an up and coming talent, though I didn’t love the film, it did show me that this guy can get the job done and with a small budget can make a film that will make you think and showcasing a very strong cast of unknowns that really hit their mark.

Caleb (Carl DiMaggio) is a former marine who is writing a book. He moves from job to job and place to place, never quite settled in. He begins to develop insomnia, has trouble sleeping, and when he does he is haunted by a masked figure that begins hurting those around him that he cares about, in his dreams, which then carries over to real life. Is it all a dream or is Caleb delusional and the masked figure in his dreams. Caleb moves to his friends apartment to try and write and find a new job to tie him over. He meets with his ex-girlfriend Liz (Penny Balfour), who is now engaged and not sure why they are talking. After rekindling a bit of what they had lost, Liz quickly ends up in a coma and Det.

Toth (Michael Del Rio) begins to suspect that Caleb may be behind this. Here starts the mystery as the people in Caleb’s life find themselves becoming victims after Caleb dreams about it. What I found most interesting and to me what makes the film work, is the relationship between Caleb and Joseph (Charles Stransky) the former priest that he looked up to all his life that has lost his faith. The two actors tore up their scenes together and really showed some range. Both men are haunted by their pasts, neither can really move forward. Their dialogue together felt the most real, conversations that make you think. It wasn’t until their first scene together that I really became drawn into the film. The rest of the supporting cast turned in excellent performances, Vincie has a real eye for finding talent. Carl DiMaggio has a leading man charisma and deserves to find himself some more high-profile lead work.

My one main complaint was the voice over narration by Caleb, it was unnecessary and felt like it detracted a bit from what was on screen. There were a few slow spots near the beginning of the film but as I mentioned before, after Caleb and Joseph speak, things become interesting. Vincie knew the strengths and weaknesses of his production, too much ambition is usually a mistake by many indy filmmakers, was able to keep things tight and play things just right. “Caleb’s Door” will make you think.

It should make you think about where you are and where it is you should be. The metaphor in the supernatural elements of the film are problems that face many people in many different forms. I myself am in that position right now and it didn’t solve my problem or show me the way, but it has shown me that we all have a door in our mind. We can open that door and decide what should happen. Should we walk through to the other side, to give up. Or can we open that door and no matter how hard it might be, grab a hold of our fears and dispose of them for good. What ever they may be, we need family, friends, and love. They will always help us find our way.