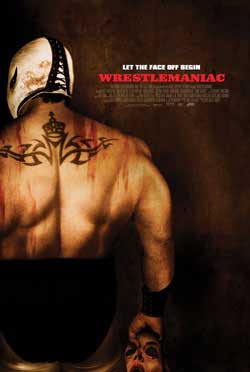 Director Alphonse (Adam Huss) makes a big mistake when he decides to shoot his film in a remote Mexican ghost town. Turns out, the town is the lair of the legendary El Mascarado (Rey Misterio Sr.) — a deranged wrestler who begins to kill off cast and crew in bloody death matches. One by one, El Mascarado stalks, captures and attacks his victims, as the remaining members of the group try to find a way to stop the killing spree.

I went into Wrestlemaniac with my expectations just too high. A professional wrestler, especially a luchador (traditional masked Mexican wrestler), would make a perfect movie slasher if skillfully done. They are strong, agile, and capable of absorbing extreme amounts of pain. Plus they already wear masks like so many of our favorite slashers like Jason, Michael Myers, and Leatherface. This movie had so much potential, but truly fell short. The movie opens with four minutes of a stock footage Luchador match. You know right away this movie is padded. So after the stock footage we meet an amateur p*rn crew on their way to Cabot and we know the movie is going to be T and A heavy as well. The opening scene in the van is painful as we are basically dealing with a bunch of typical stereotypes of p*rn stars and stoners with stilted dialogue.

The resident fat man and videographer, Steve, interviews the cast about why they got into p*rn. While stopping for a bathroom break the gang meets the archetypal stranger (character actor Irwin Keyes) who warns about the legend of El Mascarado (Rey Misterio Sr.) and the ghost town of Sangre de Dios, where the masked killer resides. Alphonse (Adam Huss), the head of the crew, decides that the ghost town would be a perfect shooting location for his adult film. On the drive there Steve regales the van passengers with the tale of El Mascarado, a genetically engineered wrestler to compete in the Olympics on the Mexican Presidents behalf. Why the president is sending a professional wrestler to compete in the very different amateur Olympics, I don’t know. El Mascarado was unstable though and could not be controlled; he destroyed everyone in his path so the government placed him in this small town in the middle of the Mexican desert.

The combination of a busted van and the lure of an original shooting location make the cast break into Sangre de Dios, where they get down to business. During the gratuitous T and A of the p*rn shoot the alcoholic p*rn star, Daisy, goes off on her own to throw up in the middle of the town. On her own, Daisy is the first victim of El Mascarado, but regrettably the first death is off camera. The next of the group to be picked off is the token stoner, Jimbo (Zack Bennett). Jimbo’s death is off camera as well. Debbie (Margaret Scarborough), Dallas (Leyla Milani #13 briefcase from Deal or No Deal), Alphonse, and Steve head back to the van and find out the entire van is shot. Leyla “who is more than just a set of tits on a pair of legs” stays behind to fix the van puts on her headphones so we know she won’t hear the ensuing chaos.” The rest of the film is standard slasher fare as El Mascarado chases Alphonse, Steve and Debbie through the town.

We find Jimbo’s and Daisy’s bodies with their faces ripped off. Steve deduces that the faces are ripped off and held as trophies, just like Luchadors rip off their opponent’s masks to shame them after a victory in the ring. We still don’t get to see El Mascarado until after Alphonse’s death. I don’t understand why Alphonse’s manhandling was all done in the first person of El Mascardo. It was an odd choice of camera work probably due to the fact they couldn’t procure Rey Misterio Sr. services for more than one day of shooting. Debbie and Steve have a showdown with El Mascardo, as Steve once again deduces that the only way to truly defeat a Luchador is to remove his mask. Some of the final showdown is told merely through grunting and screaming as the audience looks at the other side of a closed door, a poor artistic choice on the part of the director. I would have much preferred an extended scene fight scene rather than a door. After Debbie bursts through the door I was staring at blankly, we return to the wrestling ring where Debbie is promptly given a backbreaker and has her face ripped off in one of the few great gore effects of the movie. Steve is disposed of just as quickly. This scene is the only one in the movie to feature real professional wrestling moves.

Dallas returns to Sangre de Dios with the fixed van and is quickly on the run from the insane Luchador and Dallas is forced to confront El Mascarado in the ring as well.

This movie had a lot of potential as a gimmick slasher flick. My main complaint was that there was hardly any professional wrestling at all. Just think of all the creative death you can use with a professionally wrestling theme, but instead it’s all pretty run of the mill. Also I want to say that I have nothing against pointless T and A, but hide it a little better. The longest gratuitous butt shot is in a scene where one of the p*rn stars is looking for a bathroom. At only 75 minutes, including the ten minutes of opening and closing credits, Wrestlemaniac wasn’t a waste of my time, but certainly fell short of my expectations for such a fun premise.