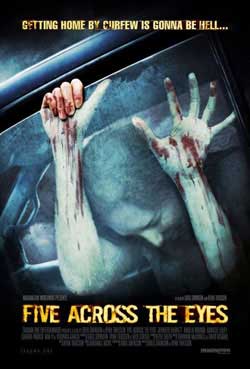 After a minor fender bender, five high school girls panic and speed away. As the teens head into an unfamiliar, remote area known to locals as “The Eyes,” they’re tailed by a one-headlight SUV with a murderous maniac behind the wheel. Road rage is taken to extremes in this horror story, as the driver begins a barrage of assaults against the terrified girls. Jennifer Barnett, Angela Brunda, Danielle Lilley, Sandra Paduch and Mia Yi star.

Five girls on the way home from a school football game in another unfamiliar town get hopelessly lost while trying to make their way home. Isabella just got her license and has to be home by 11 p.m. The girls coerce Bell into finally stopping off at a store to ask for directions and before they get even further away from where they are supposed to be. After playing with Melanie’s head and acting like they were going to pull away from her and leave her stranded, Bell accidentally hits a parked truck. Since Belle is in her Mom’s van she decides to hit and run instead of exchanging insurance info with the driver who was inside of the store.

So now Bell speeds off and soon after the hit truck passes them and turns around to chase them. The car full of girls are all arguing and putting in their two cents driving each other crazy and into a panicked frenzy. Zipping the van thru these unknown dark roads and crazy turns are making Steph ready to have a nervous breakdown. Finally the woman driving catches them and forces them out of the van at gun point. Watching things like this always makes me imagine myself in their position and believe me it is one position I pray to God I am never in. The girls are all crying and scared out of there minds not knowing what this woman will do to them.

The crazy lady keeps screaming at them and it is terrifying to watch thinking of being that age dealing with someone so psychotic. She already has blood on her hands and doesn’t look like she has any qualms to adding some more. Tormenting them is just part of the fun for her, she makes them strip and it humiliates them while making them even more afraid. Watching you will wonder what’s up next on the menu for these teen girls. The woman is clearly out of her mind as she shouts weird things at them and how they wrecked her family. How did they wreck her family when they have never see her before?

Can these poor girls with stand the cat and mouse game she is playing with them? Disheveled and distraught the girls all pile in the van with the plans of getting home high in their head. Warm baths and beds seem so inviting to them I bet, and even seeing their family who they deal with every day would be a full on treat! Things seem to be on the up and up until they come to the truck and fly by it determined to make it out of this wooded area with out her catching them. At this point in time this just doesn’t seem to be part of God’s plan for them. Now it comes to Bell confessing a few things to her friends and apologizing for some more of her personal faults and her behavior towards her one friend Melanie.

Things just kept getting worse as the deranged woman chases them thru the woods doing horrible unspeakable things to the ones she catches. When Jamie and Bell put Caroline in the car and see her all bloody you anticipate what was done to her. You think about it then say to yourself no way she couldn’t of, but guess what she did. My stomach turned and I actually felt seriously nauseous. This is one situation that will have you lost and intimidated by it’s realness. You can’t help wondering if they will make it out of this alive, it doesn’t look too good for these girls.

The torture these young girls endure is unbearable and not many people could stand all that they have gone through. Each time you think it might be done this crazy bitch pops up and does more and more. You will want to kill this lady yourself and if you could you’d jump thru the screen and bash her head in with the tire iron you would in a second. Five Across the The Eyes is flat out traumatizing!

Tags Five Across the Eyes