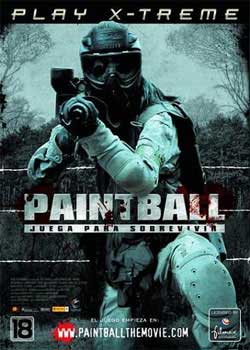 What better way to escape the mundane struggles of everyday life than with a game of paintball. A group of strangers sign up for the ultimate paintball experience only to late do they find that their fun brush with death is about to turn into a deadly struggle to survive.

“There’s nothing like a brush with death to make you feel alive.”

Paintball is a recreational activity shared by many who want to escape the every day struggles of their normal everyday lives. For a few hours these business men, slackers and single mothers get to be commandos on the battle front in realistic combat situations. In Daniel Benmayor’s film Paintball a group of strangers sign up for a thrill ride experience only to find that their brush with death may be a little bit closer than they would have initially desired.

Paintball starts by showing a commercial for a park in which games of paintball can be played. The commercial is done on the cheap, complete with words flashing upon the screen. After this add we are treated to a shot of our cast who are all sitting in the back of a vehicle. All of the people are chained to their seats and they all have hoods over their heads to hide their faces from each other, and so they don’t know their destination.

A buzzer goes off and the chains come off of the team members and they start to pull of their hoods. The cast is rather mixed as there are several women mixed into the group, proving that paintball isn’t just a guy sport after all. As the group looks around and gets to know each other a voice comes on a speaker in the vehicle. The voice assigns each of the members of the team a particular position and tells the team their objective. The objective is fairly simple they simply have to stalk through the woods to different points where there will be flags. At each of these points there is also a case that contains something that will help them further on in the mission. The whole process seems like a standard paintball game, although it does seem rather expensive. The team begins to arm themselves and get ready for their drop off.

One of the members named David, who seems to have been equipped with a map, takes immediate control of the group. As the group makes their way to the first flag point they discover that it is littered with abandoned cars and a bus. For several minutes the group strategically searches the area when one of the members of the team complains that this was supposed to be an action game. As soon as the words leave his lips paintball fire from the opposition begins to rain upon the group. I will note at this point in the review that director Daniel Benmayor captures the frenzy of a paintball game quite well. Characters are screaming as the balls of paint are flying from every direction. Eventually the team makes their way onto the bus where they believe they will be safe from the opposing team’s fire. One of the members of the team though is unaccounted for, but she makes herself known in a few short minutes when she storms into the bus carrying the case that was to be found by the flag. The team immediately opens the case and discovers a bullet proof vest. Quickly one of the teammates puts the vest on and as soon as he can fasten the straps smoke bombs are thrown inside of the bus.

As the smoke begins to fill the area the team gets very confused, they had no idea what kind of weaponry their opposition would have and the smoke bombs were certainly not planned. The group slowly maintains composure and decides that they must leave the bus since they are sitting targets. The group begins to leave the bus in short groups when suddenly the team member in the bullet proof vest is shot. He goes down and another team member runs out behind him only to fall victim to the live rounds.

Seeing two members of the team getting shot with live rounds doesn’t sit very well with the rest of the group who suddenly start to run off. The member with the jacket does manage to get up, but is injured still from the shot and struggles to catch up only to be shot in the ankle. As he struggles to catch up with the group he soon finds himself caught in a trip wire, talk about your bad luck. As he hangs there waiting for help David finds him. Instead of helping the teammate down from the trap David decides instead to take his teammates bullet proof vest. When David gets back to the rest of the group he informs them that “they” got him and that they should keep moving.

When we once again see the poor teammate who is still hanging from the trip wire he is in worse shape. There is someone stalking the team, you know when it’s him because the camera changes to a thermal first person view shot. The stranger takes apart the teammates gun and plants it into the ground just below the teammates head. After the stranger does that he walks over to the rope holding up the teammate and cuts it resulting in the teammate being impaled headfirst on his own gun. Now the team not only has to worry about an opposing team that is using live rounds at them, they also have a stalker who is filming his dirty deeds for an audience. Who will survive this deadly game of paintball, and what sacrifices will have to be made for their survival?

Daniel Benmayor’s Paintball is an interesting film to say the least. There are elements of snuff culture and elements of the slasher film all rolled into one package. The frenzy of the paintball game also allows very few slow moments.

The stranger’s thermal camera view mode does create some interesting shots such as when one of the teammates runs into a room with a glass floor. As she bangs on the floor and yells for someone to help her the stalker walks into the room and the viewer gets to see the group of people underneath the glass who are there to watch the girl die, it is a rather disturbing sequence to say the least. There are a lot of gruesome deaths throughout Paintball, but most of them are captured by the stalkers thermal camera view. In one of the more interesting deaths the teammate who now has gotten the bulletproof vest struggles as the killer places small mines between their ribcage and the vest and then steps on them causing their chest to explode several times.

Paintball can come across as chaotic and confusing at first, mainly due to the first few action shots which almost have a documentary type of film style to them. Halfway through the film however another subplot is developed of people who don’t wish to pay money to brush with death but want to shell out their hard earned cash so they can witness death first hand. This again shows that Daniel Benmayor isn’t just satisfied with his movie containing elements of one part of the subgenre.

I definitely recommend Paintball to fans of the slasher genre who are looking for something with a different type of twist and to anyone who likes their horror to be more on the fast pace variety.