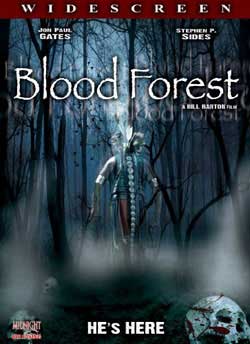 Virgil (Jon-Paul Gates) is an alcoholic tabloid reporter who is sent to Arkansas to investigate some Bigfoot sightings reported by some of the locals. Once he gets there he runs into a variety of people (including the corrupt sheriff and the bitter Native American Vietnam veteran who lives by himself out in the woods) with some of them claiming to have seen Bigfoot while others are less helpful. As his investigation continues something (or someone) in the woods starts killing people and he tries to get to the bottom of it as the body count continues to rise. Is it really Bigfoot committing the murders or is the culprit someone a little more human?

Let me just start out by saying that I was really into “Blood Forest” and thought that it was great…until the last ten minutes or so. I thought that the premise was good, I liked most of the characters, and I enjoying trying to figure out if there really was a Bigfoot running around killing people or not, but the ending was such a slap in the face that it came close to ruining the entire movie for me.

“Blood Forest” is not your typical Bigfoot movie that the Sy Fy Channel likes to show on the weekends. It is something a little different and I think it almost has a “Blair Witch Experiment” feel to it at times. Most of the killing is pretty subtle and done off screen, so we don’t have someone in a horrible Bigfoot costume (or an even worse CGI one) running around beating the hell out of everyone. I liked the fact that it was different from most movies of its type and for the most part it is quite enjoyable (again, until the end).

Why didn’t I like the end, you may ask? I don’t want to give anything away but let me just say that nothing is resolved at the film’s conclusion. I don’t know exactly what the filmmakers were going for by just having it end the way it does, but I have my suspicions that writer William Barton didn’t really have any idea how to end it. I was expecting one hell of an amazing payoff after such a strong build up but it just didn’t happen. I have a feeling that I won’t be alone on this and that most viewers will not only hate the ending but will feel cheated by it as well (I know that I did).

I’d love to say that the end is the only flawed aspect of “Blood Forest” but that just isn’t the case. The acting is pretty lousy for the most part and the gore is pretty fake and cheap-looking. There are also several scenes that are just weird and out of place (such as when Virgil is drunk and talking to himself or to someone on his cell phone, as well as the scene at the beginning where the man and woman are talking about how they are going to take over the town that ends up going nowhere), and I thought that the whole subplot with the reclusive Vietnam vet and his issues with the sheriff seemed unnecessary and forced.

On the flip side, there were some things that I really liked about the movie. I really dug the idea behind it and was really interested in it for the most part. I thought that Jon Paul Gates rocked in the role of Virgil (he was one of the only good actors in the film) and even though the character was an arrogant, condescending prick there was something about him that I liked. I also liked the sheriff (John W. Davis, the only other person whose acting wasn’t horrible) because he was such an asshole and I thought that Davis played the part pretty convincingly.

“Blood Forest” is the second movie I’ve seen recently that started off strong but dropped the ball toward the end (see my review for “Bloodlock”). I don’t think that it is unfair to say that the filmmakers should have put a little more thought into the ending as I think a lot of people will hate it. Give it a shot if you are looking for a different type of Bigfoot movie but be prepared to be let down by the finale.