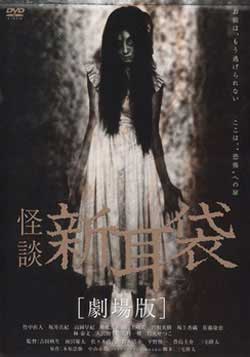 Movie anthology inspired by Kaidan, contemporary spins on time-honored Japanese ghost tales, based on the television series Tales of Terror from Tokyo and All Over Japan.

The Examination: Tame but occasionally effective guerilla filmmaking from the creators of Ju-On, Premonition, Ringu and others in a series of hot-and-cold vignettes revolving around the supernatural.

You might think of the old EC comics by association of the title Tales of Terror from Tokyo and All Over Japan. However, the suddenly-popularized resurrection of Kaidan in Japanese cinema (which has been hijacked by an American filmmaking society dunked within its voluminous tidal wave of remakes) is the more representative inspiration to Tales of Terror from Tokyo (the official American title of this picture), particularly the ashen spooks haunting this compendium of mild stunners.

Kaidan (or the westernized label known as “Kwaidan”) is a form of storytelling born from the Edo era of Japan (1603-1868 AD) in which supernatural stories were conjured up at social gatherings in games referred to as Hyakumonogatari Kaidankai, or in English, the Gathering of One Hundred Supernatural Tales. Japanese lore also ties these stories to a renowned samurai named Negishi Shizue who accessed the stories from prisoners under his watch.

Tales of Terror from Tokyo’s ploy is to recreate these stark, ancient stories within a modern encapsulation. The film’s vignettes are served in eight bracketed segments ala Tales from the Darkside or in a few cases, five-to-ten minute urban legend thrillers. Originally Tales of Terror from Tokyo and All Over Japan (2003-04) was designed to test Japanese filmmakers’ prowess by forcing them to tell their ghost ditties within a paltry five minutes. In this film, however, the parameters are spread in some cases while others are not.

An example of the former is the opening (and one of the film’s best) story “Night Watchman” in which a soon-to-be-condemned building is literally haunted by ghosts who chase newcomer security guards out, while the one guard casually dismisses the chronic manifestations as figments of the imagination, no matter how vivid their appearances are. Dashes of humor keep this one honest and fresh.

An example of the latter is a here-and-gone ditty about a haunted mirror (“Full Length Mirror”) stationed in the equipment room of a school gymnasium. No sooner are the nappy-haired youths introduced into the quick-flashed yarn, a creepy female spirit attacks them, end of story.

If you’re expecting blood and guts from this thing, be on your way to the closest Cat III joint you can find. Tales of Terror from Tokyo is more about creating atmosphere and customary spook jobs with the same pale-face gloss of The Grudge (or Ju-On). Sometimes it succeeds, particularly with the unnerving female elemental taking up residence in an apartment the lead character is watching over in “The Promise.” Her twinkly and disarming voice haunting the crap out of the poor sucker works over the viewer with equal efficiency just in time for an extreme close-up that wrenches the screen with her morbid façade. The fact she’s as tall as the room in the next frame does deliver a genuine freakout moment.

In other places, the kamikaze storytelling is so abrupt you wonder what exactly happened, such as the trio of girls in “Wisps of Smoke” who get stranded on a barren road and are terrorized ala The Evil Dead and Satan’s Playground by some mystical force which literally evaporates one out of her shoes. The ending is so immediate and evident (though leaving its resolution to the viewer’s imagination) it bears a lack of satiation. “The Weight” literally slams its position home from an otherwise inviting spirit which crushes the living in their sleep.

At another point, a group of schoolgirls in “Line of Sight” leave a time capsule film of themselves relaying what they what to be when they grow up; the punch line to this quick job is a ghost skulking up the stairs in the background during one girl’s testimony. What happens thereafter is reminiscent of Ringu, which is a tad shivery with final exposition of the entity bursting out of the film.

Most of the way, Tales of Terror from Tokyo’s ad hoc punch line is the immediate off-camera poke-in from sullen, disfigured and hollowed ghost faces. It’s effective on occasion but after awhile, you get the gist. Again referring to the towering female specter in “The Promise,” she is the rightful showcase phantom of the entire film and she will leave her mark on you, particularly from her skritchy beckoning call.

The final story “Hiaso,” in which an aggrieved woman continuously mops trailed water after what is revealed to be her drowned son living amongst her is a bit stretched out in time for what becomes an obvious conclusion. However, the sharp filming and traditional Japanese aesthetics (i..e. period-replicated domestication and garb) gives this harmless and sensitive story about the grieving process a nice flair.

In the end, you will feel slightly blitzed by a sensory overload of J-Horror ghosties popping up in mostly predictable places. Partially you’ll feel cheated because a number of these stories allow for little build-up or characterization. You’re introduced to certain people and places then submitted to occasionally cheap shock tactics, though admittedly there are a handful of good ghoul tricks to be found here. The longer stories in Tales of Terror from Tokyo work much better from the obvious standpoint we’re allowed greater access into the devilish minds looking to get under our skin.

Tags Tales of Terror from Tokyo