Home | Alternative 3: The Strange Saga of the First Mockumentary 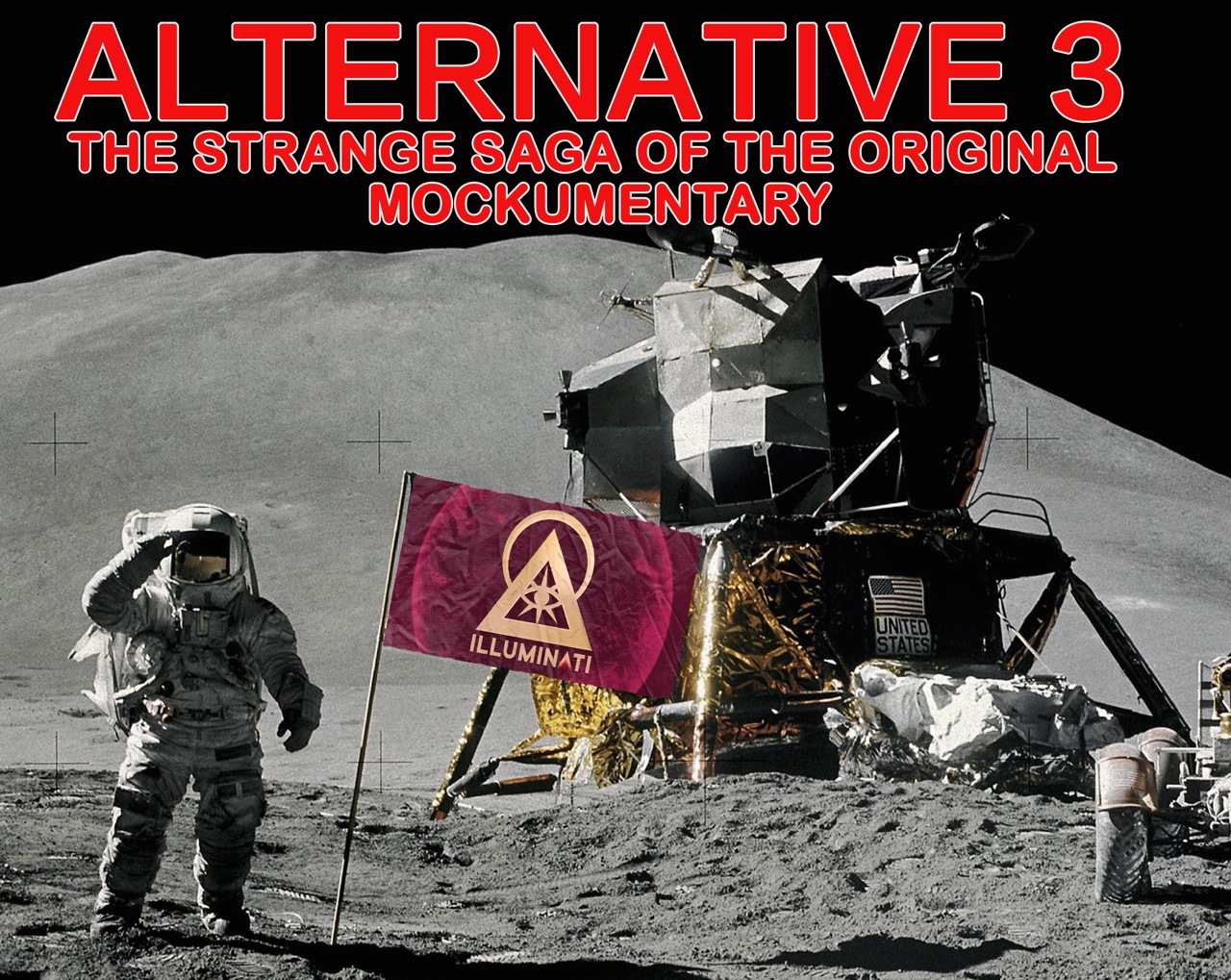 Reader beware—we are about to tear away the veil of secrecy surrounding what one researcher has called, “The most dangerous film ever made!” revealing a conspiracy so controversial that even Breitbart News wouldn’t have dared publish it. It was all the brainchild of a dark cabal that involved a respected British newscaster, the screenwriter of Amityville 3D, electronic music pioneer Brian Eno and, most shocking of all … one of the Thunderbirds! It’s a work of pure fiction that’s blossomed into a full-on conspiracy with thousands of devout believers. Welcome to the shadowy world of ALTERNATIVE 3, and please remember, it’s all true … except the lies!

It’s no surprise that mockumentaries have become such a popular fixture in today’s entertainment. Their flexible format has been used to reinvent history (CSA: The Confederate States of America 2004), put a fresh spin on slasher films (Behind the Mask: The Rise of Leslie Vernon 2006) and as a vehicle for social satire (Best In Show 2000). Television has also embraced the format in shows like The Office (UK and USA versions).  Comedies like Woody Allen’s directorial debut Take the Money and Run (1969) and Rob Reiner’s brilliant This is Spinal Tap (1984) helped bring the genre into the mainstream, but mockumentaries can be traced back to roadshow extravaganzas like 1935’s Forbidden Adventure, which used the faux documentary format as an excuse to show topless native women—despite the film being shot entirely in Los Angeles utilizing off-duty African American prostitutes.

But none of these managed to grab the public’s imagination like Christopher Miles’ 1977 film Alternative 3, which honed the fiction-as-fact format to a razor sharp edge. It stands as the only mockumentary that, after forty years, still has thousands of devoted believers. This is especially remarkable considering the film’s far-fetched concept revolving around climate change, government sponsored kidnapping and a secret space program to colonize the planet Mars.

The urban legends surrounding Alternative 3 have been chronicled on dozens of conspiracy websites but here’s the Cliff Notes version. In 1977, the producers of the Anglia Television documentary series Science Report uncovered a story so terrifying in its scope that even they were afraid to report it. Determined to tell the truth, they elected to produce a fictional piece secretly incorporating their findings thereby blowing the lid off a dark conspiracy threatening the entire human race. They chose to air the story on April Fools’ Day 1977 to support their “work of fiction” cover story. This whistle-blowing episode entitled Alternative 3 would undoubtedly be Science Report’s final episode, but these brave journalists were willing to sacrifice their show, and perhaps even their lives, to enlighten the public. When their creation was broadcast it sent viewers into a panic not seen since Orson Welles’ War of the Worlds … only this time the Martians were real! 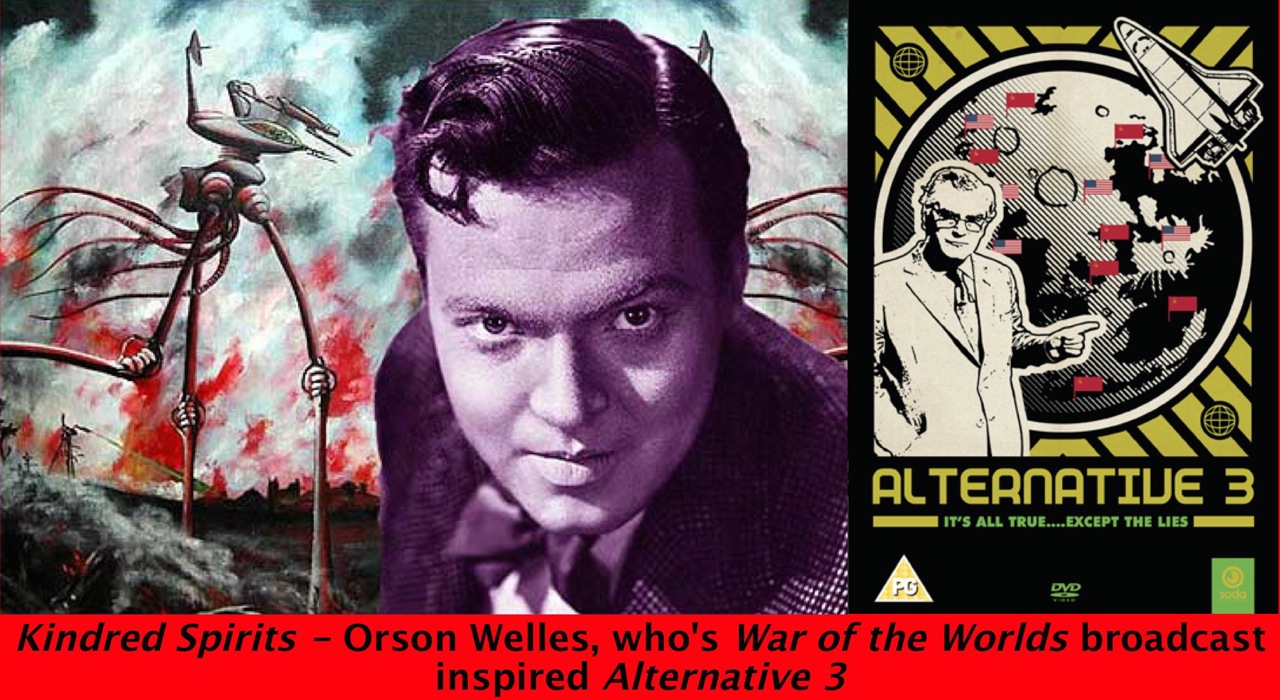 The actual story behind Alternative 3 isn’t quite so dramatic, but it’s an equally entertaining slice of broadcasting history. In truth there was no television series entitled Science Report—it was a generic show title created by director Christopher Miles (Virgin and the Gypsy, 1970) and screenwriter David Ambrose (The Final Countdown 1980) to frame their updated take on Orson Welles’ War of the Worlds broadcast. Christopher Miles shared the genesis of their unique concept.

“Alternative 3 came about when David Ambrose asked me over to lunch to discuss a script he had written for Anglia Television called ‘Disappearing People’. He had already sent me the script to read to consider as a director. But Anglia weren’t keen on it and wanted a rewrite. The script was in synopsis form and basically it was about people disappearing from the UK… but to where? David hadn’t come up with an answer as yet. It was written as a TV ‘play’ as they called it then, not as a documentary. We had already established a working friendship as I had asked him to write an adaptation of Daphne du Maurier’s tale “Not After Midnight”, which we were still discussing at the time.

“I clearly remember it was a sunny day on Thursday September 2nd, 1976 during an exceptionally hot summer when England was suffering severe droughts along with many other parts of the world including Australia. California was entering its sixth successive drought year too. David is married to Laurence, a lively Swiss French sculptress who brought along a copy of Paris Match, the well-known French magazine. It was lying on the table with the arresting first NASA photographs of the Martian landscape in color on its front cover with an article inside featuring more photographs of the Mars landings. Suddenly I had an idea and turned to David, ‘Suppose they were disappearing to Mars?’ From that moment on the idea of using real photos of Mars was born along with using a documentary approach. We decided to use the phenomenal heat waves and droughts of the summer and to bring up climate change, which was scarcely talked about then.

“After a second meeting in which we built up further ideas David worked fast on a first draft synopsis and presented it to Anglia. The idea was turned down by the entire board of Anglia except for one person— Sir John Woolf, who had begun making and distributing feature films in the 1950s. He loved the idea and told the board, ‘we should let the boys have a go at this.’ 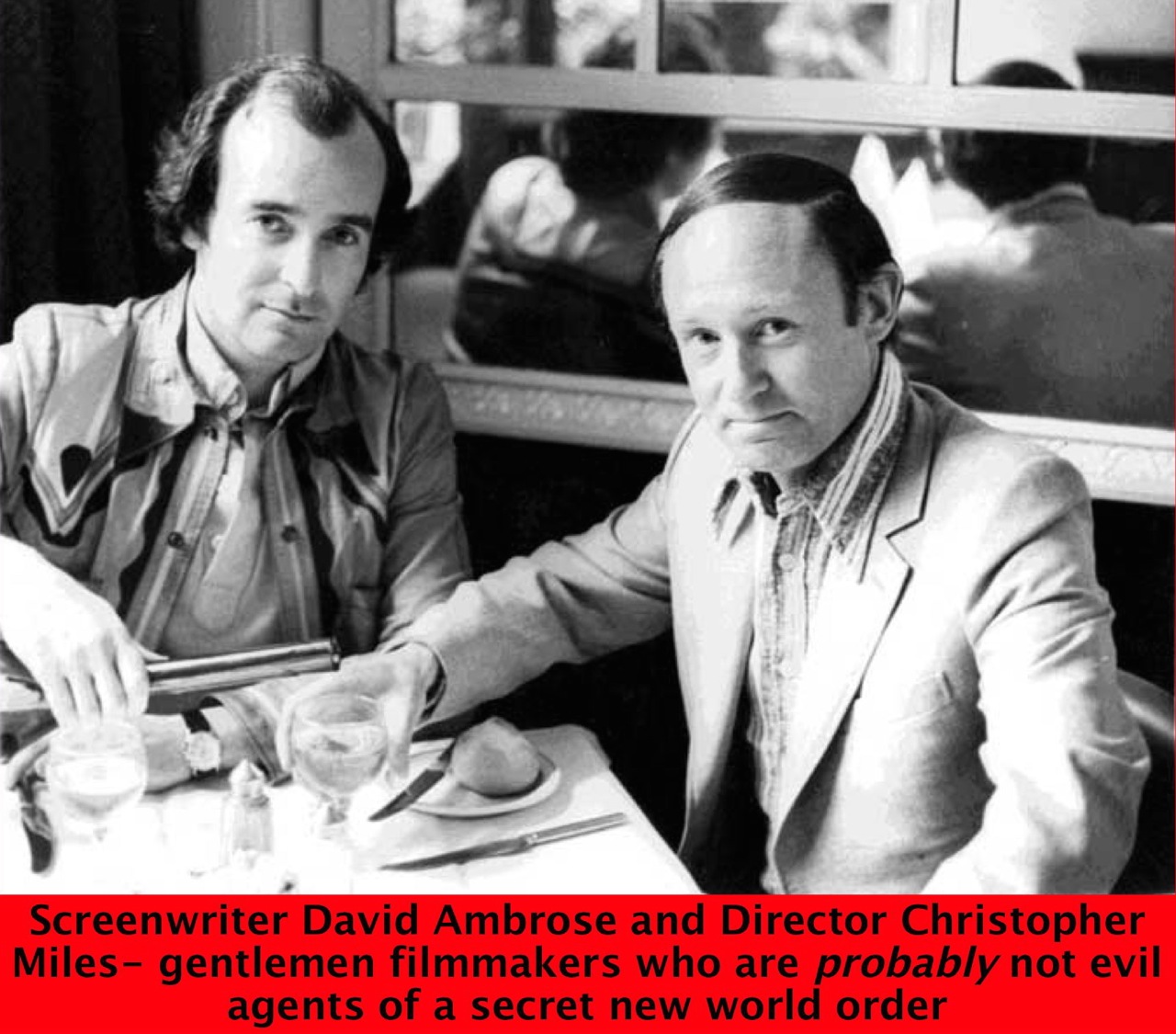 “The idea of an April 1st spoof documentary on UK TV was not completely new as twenty years earlier the BBC had made a short news clip for their program called Panorama covering the year’s successful spaghetti harvest. It’s great fun and was narrated (and here’s the trick) by the most famous truth laden voice of Sir Richard Dimbleby, who also narrated many nationally important events including the queen’s coronation.”

Although Alternative 3 was conceived as an April Fools’ Day prank, its chilling concept, revolving around space travel, conspiracies and evil shadow governments, might have been more appropriate for Halloween. The screenplay wisely eschewed any elaborate special effects—opting instead for a believable array of stock news footage combined with staged interviews of scientists and astronauts whose carefully chosen names had just the right ring of authenticity. Christopher Miles remembers taking a cue from the famous spaghetti harvest news clip by enlisting a face the public trusted as Alternative 3’s on screen narrator.

“Tim Brinton, at the time of making the film, was a well-known Conservative Minister of Parliament, and used to read the nightly news on the ITN network a few years before.” 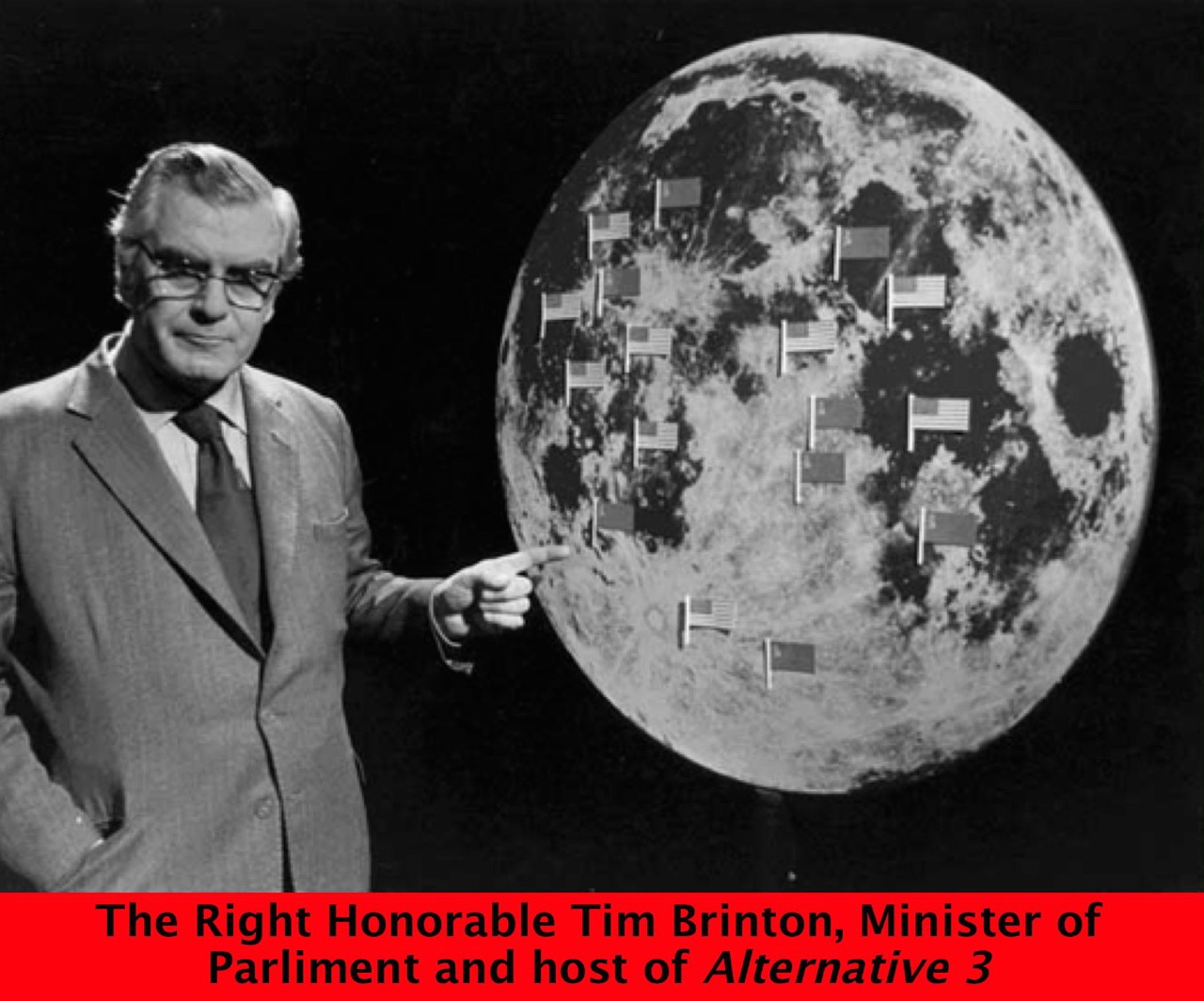 With the right honorable Mister Brinton as its anchor, Alternative 3 begins as a sober study of the then topical “brain drain” wherein highly respected scientists and engineers were leaving Britain. But investigative journalists quickly discover that these intellectuals haven’t just left England—they’ve actually vanished from the face of the earth. Their research takes them into a clandestine world where witnesses go insane after the initial interview or disappear completely.  The suspicious death of a top astronomer leads our intrepid reporters to an encrypted reel of videotape and ultimately to Bob Grodin (Shane Rimmer)—an alcoholic former NASA astronaut who blows the lid off of an earth-shattering conspiracy. He reveals that NASA’s lunar program was nothing more than a smokescreen, hiding a light years more advanced American and Russian cooperative space program. Science Report finally discovers the socially elites’ plan to flee the overly polluted earth and colonize Mars, leaving the rest of us to die in our own terrestrial filth. All those missing scientists and engineers have been involuntarily drafted to construct this brave new Martian world.

Alternative 3’s teleplay served up a “Whitman Sampler” of conspiracy theories including NASA being a fraud, manmade climate change bringing on our extinction, an illuminati secretly controlling the world’s governments, MK Ultra style LSD dosing of witnesses, plus a myriad of black ops and media control.

With Sir John Woolf acting as their shepherd, the teleplay was completed and finally approved—now it was just a matter of getting it from the page to the screen.

Initially, director Christopher Miles wanted to use non-actors for the on-camera interviews, but union regulations shot down that concept. Instead he carefully chose actors whose faces wouldn’t be recognized by the public. Shane Rimmer, London’s self-confessed “rent a Yank”, plays the drunken, paranoiac astronaut Bob Grodin, who takes creepy pride in pointing out his much younger girlfriend (Linda Cunningham) to an interviewer with lines like, “Just to go on record she’s not my daughter.” It’s a disarming screenwriter’s touch that makes his character believable. Rimmer later became a regular fixture on British screens appearing in three James Bond films as well as being prominently featured in the classic Dr Strangelove. At the time of production he was mostly known as the voice of Scott Tracy in Gerry Anderson’s supermarionation series Thunderbirds. Gregory Munroe and Carol Hazell both give solid performances as dedicated reporters. But, of course, the real star of Alternative 3 is newscaster Tim Brinton, who plays it all with the dignity of a Shakespearean actor on opening night; you’d believe anything this guy tells you. 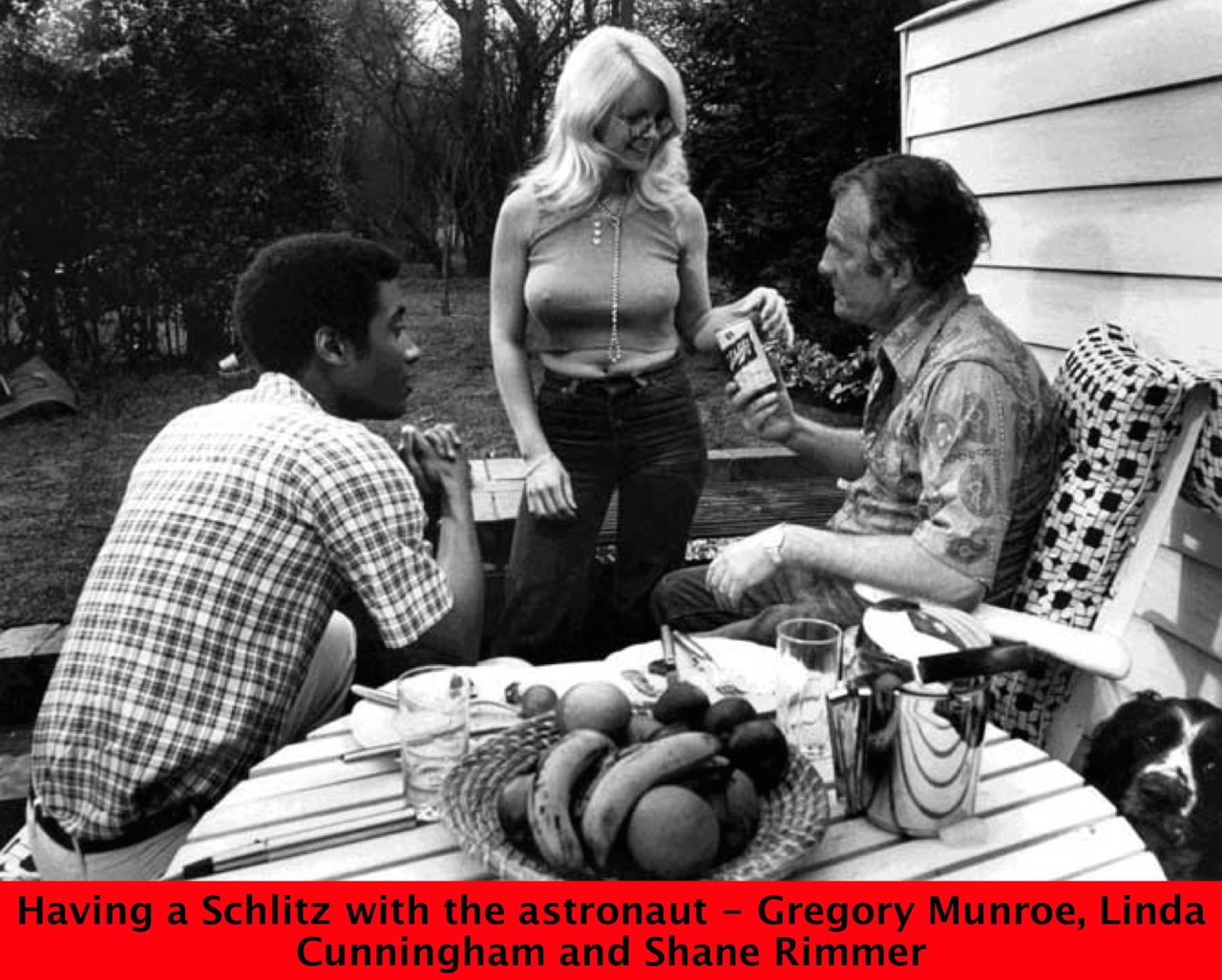 Alternative 3 was shot in 16mm over the course of twelve frigid days in January of 1976. Miles went to great pains to ensure the film had a shaky vérité approach, even insisting that the film laboratory degrade selected footage.

But the real showpiece was the unveiling of a top secret 1966 Mars landing. It’s the show’s only real special effect and it succeeds perfectly by not trying too hard.

Miles shared his lo-fi approach to visual effects. “This was all done before the days of CGI. It was actually created by myself using some old helicopter shots of the Red Desert in Egypt and then using Anglia’s 16MM film telecine machine by my sticking a strip of black tape over the screen during transfer to emulate the view from the window of a space craft landing.”

But the real challenge came when the filmmakers had to unveil life on Mars with no money but a lot of ingenuity. The scene also became the director’s cameo appearance. “I just made a Martian surface out of damp sand and buried my forearm in it. The mysterious creature moving below the surface of Mars is actually my fingers wiggling up through the sand. Then we transferred the film to video, manually interfering with the video player to make the picture roll and flicker.”

With all these ingredients in the mix the filmmakers earnestly felt Alternative 3 would make an initial splash and then be remembered as a clever experiment in television. Maybe they should have had a chat with Orson Welles, who could have warned them about the innate gullibility of the public. 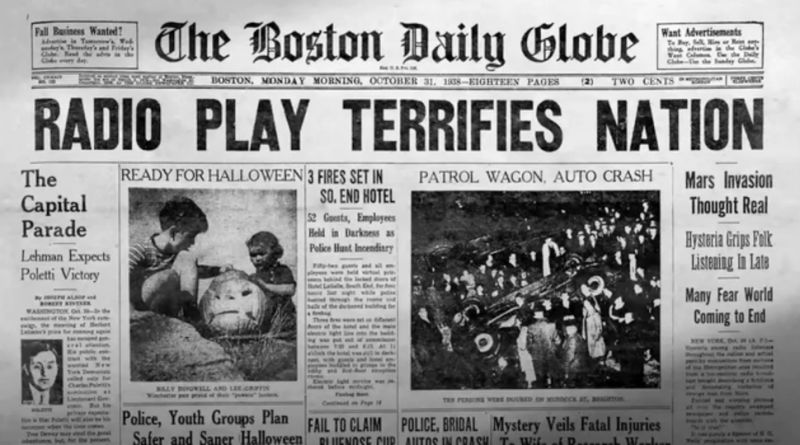 Stay tuned for part two when Anglia Television unveils Alternative 3 only to discover that a show can actually be TOO convincing for its own good. 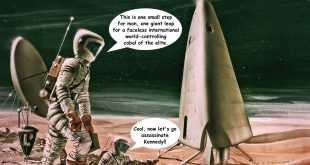 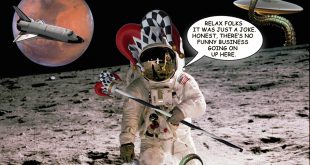