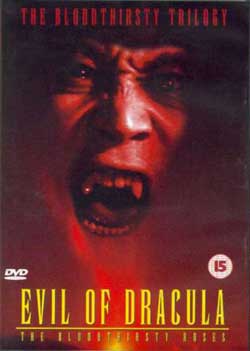 Dracula, played by an uncredited caucasian, was shipwrecked in the 1600s in Japan, when Christianity was illegal. He was forced to spit on the cross and wander alone in the desert. Upon finding himself bleeding, he was so thirsty he drank the blood and acquired a taste for it, attacking local teenager Keiko. In present day, Professor Shiraki arrives at a girl’s school where he was to be teaching, but now the principal, whose wife died in a car accident, wants Shiraki to take over for him. The principal is keeping his wife in the cellar for a week, supposedly according to local custom, to see if she might return to life. Immediately suspicious, Shiraki investigates and becomes entrenched in horror of the vampires. Three girls are caught up too, as one has already been bitten, and her roomates stay to care for her.

Okay this is a strange one. A TOHO Production from 1974 and it does have a slight look of a Godzilla movie but also a bit of a Italian feel but mostly I think they were going for a British Hammer horror vibe.
A teacher , Shiraki , arrives at his job at a school and promptly meets the principle and right away you get the feeling something is wrong with the pale principle dude. He invites Shiraki to stay at his house so he can get to know him better since he wants Shiraki to eventually take his place as principle of the school.

Also the principles wife recently died in a car accident and he is keeping her body in a coffin in the basement. Shiraki agrees to stay but sometime in the middle of the night Shiraki is awakened by some haunting singing and goes out to investigate and finds a young , very pretty and very pale Japanese girl. She reaches out for him and Shiraki senses something is wrong and backs away from her only to be lunged at from the side by another pretty , pale , and fanged lady in white. Now he knows something is really wrong so he makes a run for it down the hall only to run into the first girl that was singing. Now he’s surrounded and stands almost frozen in fear then it looks like he takes a blow to the back of the head and passes out but nothing hit him and I think he just fainted from fear. Whatta pansy! But this is pretty cool because all this happens within the first ten minutes of the movie and it’s nice when things start happening quickly in a horror flick.

Shiraki awakens in the morning in his room and assumes he had a nightmare. He gets up to learn what he can about his new job and surroundings. EVIL OF DRACULA is weird because it was made in the 70’s but seems like it was aimed at those of us in the future who like cheezy grade B shlocky horror flix along with our more serious and brutal goresoaked tales of terror.

It does have a dark blue isolated atmosphere ; the music is properly spooky and ominous and the landscape around the school is barren , lonely , almost like from another planet even. There is a scene where the school doctor relates a tale to Shiraki of how vampires came to be. A priest , a white guy actually , is walking across a desert and must drink his own blood to survive and becomes a vampire. I was more suprised to see a desert in Japan! Anyway this is all good until we see the evil Japanese Dracula guy. He’s actually never reffered to as Dracula , just the principle but he’s not very scary.

He is pale , has fangs and wears the traditional Dracula type suite and cape but also sports a billowing white scarf around his neck. In another scene he is caught spying on some of the girls and is chased by Shiraki , the school principle , and a security guard. He runs away but turns the tables and attacks them but he doesn’t seem to have any of your basic vampire powers. Yeah he can turn people into vamps and can suddenly appear in front of people when they run away from him but he’s not stronger than your average human , he can’t fly or turn into a bat and when he does kill it’s by strangulation. He has a vampire man helper that Shiraki dispatches by tossing him into a lake and the motherf*cker drowns.

One by one though the vampire principle turns the girls into sexy nightime fanged vixens. Kyoko , Keiko , and Yukiko. All these girls are very pretty and make up the better parts of the movie when they are onscreen and we even get to see some chesticles! Except for Kumi who is the cutest one but does not get turned into a vamp and does not bear her boobs. Darn!

Director , Michio Yamamoto , even tries at some creative camera work and special efx and mostly suceeds. One really creative and bloody part is when one of the female vampires slices off the face of another girl with a knife , while a raven is picking and pecking and eating pieces of the face , and she puts it on her face like a mask. Why? I don’t know but it’s weird , cool , kinda haunting and wicked! It’s just that damn vampire principle Dracula , he looks so cheezy!

So it all comes down to the final battle between Shiraki and Kumi against principle Dracula and one of his undead hottie minions. I don’t want to give the whole movie away but it ends abruptly yet predictably and sort of how you imagine it might but with some special efx that are somewhat gruesome and cool and cheap and cheezy at the same time.

If you are into weird , oddball genre pieces that strive for a certain feel but totally miss the mark and become something else then EVIL OF DRACULA might be up your alley. It’s not really frightening but it is entertaining and certainly different from almost every other Asian horror movie I’ve seen. That’s gotta count for something.