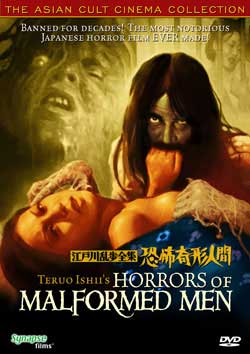 A medical student searching for his father discovers a deranged scientist on a remote island whose experiments combine humans and animals to produce terrifying creatures in this surreal and horrifying tale. The student soon unearths disturbing facts that link him to some appalling truths. Adapted from stories by horror author Rampo Edogawa and directed by Japanese exploitation auteur Teruo Ishii, the film remains banned in its native Japan.

Many thanks, respectful bows, butt kisses, ice cold beers, and a demon tied to a chair in Mikes brain for hooking me up with a copy of this film to review! I had planned on purchasing this film but it’s a real treat to get it without paying for it AND get to review it for this site! I had already read more than a few reviews on it and many hailed it as a must see for fans of bizarre, surreal, mindbending, and just plain weird cinema with leanings toward the horror genre. Even after reading this I half expected it to be the Japanese version of THE ISLAND OF DOCTOR MOREAU, even though THE ISLAND OF DOCTOR MOREAU would not be made until six or so years after HORROR OF MALFORMED MEN. But the cover art of the dvd howled out to me and I figured it’d be right up my alley.

You should be aware that it is based on a story by Edogawa Rampo who also wrote BLIND BEAST and GEMINI, among others, and both these stories have been made into films and GEMINI is a good, strange one too. See, now ya know!

And HORROR OF MALFORMED MEN was made in 1969 and is to this day still banned in Japan, but really with some of the sick ass films that have come out since this was made I can’t understand it’s banishment.
So as a warning I advise you to enter the world of HORROR OF MALFORMED MEN with a mind as open as the grand canyon and not have any preconceived notions of what it’s about if you choose to view it but if you like strange and surreal films you kinda know what your getting into. Does that make any sense?

Now I love movies with blood and guts splattered across the screen but HORROR OF MALFORMED MEN is not this type of movie. It’s not even a traditional horror movie with jump scares, dark and foggy nights scenes with spooky atmosphere but it is horrific with many of the subjects it deals with and it does have elements of a mystery and it has the Malformed Men, and it does have some gross stuff in it but it is not a gore flick. And the Malformed animal like men are not at the forefront of this movie and are really not animal men at all and yeah if you’ve heard anything about the makeup for these monster men it does kinda suck but there is much more to HORROR OF MALFORMED MEN than the special effects.

To it’s credit the movie begins in a rather large dank jail cell with a lot of women that are for the most part topless which is a excellent way to begin any movie! We learn that this place is a mental institution and it’s where we meet the main character Hirosuke. He soon escapes from this house of the deranged and meets a pretty young circus performer, Hatsuyo, who is humming a song he recognizes from his youth and together they plan to figure out where they came from but before much can happen she is killed and Hirosuke is blamed for her murder and must go on the run and search for his origin by himself and heads for the coast of Japan. On his way there he reads that a prominent citizen has just been buried and Hirosuke looks identical to the deceased and assumes his identity, going so far as to dress up in the corpses burial clothes and pretend it was a premature burial.

From his impersonation of this dead guy he learns of a small island off the coast and that his past is linked to this mysterious island. This is all in the first alf of the movie and if I didn’t know better I would have thought this was just some kind of murder mystery movie but I knew the Malformed Men were coming and all I had to do was wait. And while I was waiting I was treated to two very cute very well endowed Japanese maids taking a bath together when the Malformed Men finally make their appearance.

After this is when Hirosuke finally decides to take a small group and head for the island still not having any idea what he is in for and when he does arrive on the island is where the film really takes off and rewards the viewer with some truly bizarre images! I think if you love EL TOPO, THE HOLY MOUNTAIN, FELLINIS SATYRICON, LIQUID SKY, THE MANSION OF MADNESS, IZO, the films of David Lynch and David Cronenberg, and many other surreal films I can’t think of right now you will enjoy HORROR OF MALFORMED MEN. It has images that are strange, compelling, unique and when they hit they hit hard.

From the master of the island, Jogoro Komoda, doing his weird and kind of silly dance on the rocky shore, all the painted women crawling on their hands and feet down the hill being whipped like beasts, to the women swimming in the lake as Jogoro Komoda feeds them like fish in a zoo, and the lady sewn ass to ass to a goat! The music and the lack of sound of movement and speech and then it gets even weirder with all the silver painted ladies and men doing strange dances! HORROR OF MALFORMED MEN reaches that bizarre plateau of surreal oddness that the films I previously mentioned attain. I wish these crazed images would have lasted longer than they do but even though the subversive level of visual strangeness tapers off it still stays pretty damn weird until the end of the film. The ideas Jogoro Komoda has for his island and the extreme levels he has gone to, to create his own world are somewhat shocking. I don’t wanta reveal the whole ending but this film involves murder, suicide, incest, second hand cannibalism, gross experimentation and surgery and good old insanity!

I was not let down by HORROR OF MALFORMED MEN, I was not put off by the down right near awful makeup effects and the fact that being a film from 1969 it is a bit dated but I am glad I finally witnessed it and I am honored to get to review it for HorrorNews.net.

And if you decide to get the dvd from Synapse you can also expect to get a wealth of extras including a commentary, 30 minute documentary, and poster gallery, and reversible dvd cover among other special features. Really I don’t know if this review can actually assist you in deciding if you want to see HORROR OF MALFORMED MEN ’cause as many people that do like it just as many seem to dislike it and others are just ho – hum about it but I liked it and hope you give it a chance and if you haven’t seen the others I mentioned, especially EL TOPO, which you can read a review of here on HorrorNews, I implore you to check them out as well.