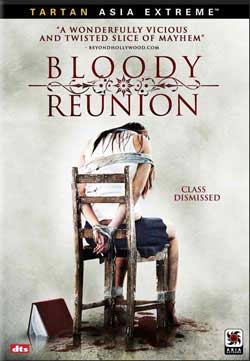 Mrs Park (Oh Mi-Hee) is a former elementary school teacher, who is in poor health and confined to a wheel chair, cared for by one of her ex-students, Nam Mi-Ja (Seo Young-Hee). Mi-Ja invites some of her old classmates to a (bloody) reunion in order to try and cheer Mrs Park up. However one by one the classmates are brutally murdered by a killer who covers her/his features with a handmade rabbit mask. Only Mrs Park and Mi-Ja survive the reunion, and Mi-Ja informs the Police that murderer is Mrs Park’s deformed son, Young-min, who was forced to wear a rabbit mask to cover up his facial deformity by his mother and kept caged in the basement. But is she telling the truth? And why is she the only student to survive?

The film opens with the Police’s discovery of the bodies of the butchered ex-students in the basement of Mrs Park’s home. Tied to chairs, and mutilated, their bodies are carefully positioned to create a macabre set piece. Mrs Park and Mi-Ja are taken to the hospital, the former unconscious and the later seemingly catatonic. When Mi-Ja eventually speaks in response to Police questioning, she recounts a disturbing tale of abuse and revenge. The film shifts to the past, and we see Mrs Park and Mi-Ja waiting with great anticipation to the arrival of Mrs Park’s old students and Mi-Ja’s ex-classmates. However soon after they arrive, the reunion descends into chaos as one by one the group take out their resentment and anger on Mrs Park. The ex-students are ciphers, rather than fully fleshed out characters, each one representing a particular type of student. There is Myung-ho (Lee Dong-Kyu), the attractive one; Jung Won (Jang Seong-Won), the shy and silent one; Sun-hee (Lee Ji-Hyeon), the fat one; Dal-Bang (Park Hyo-Jun), the athletic one and finally Eun-Young, the poor one. As events unfold, we discover that all the ex-students had a reason for wanting Mrs Park dead having been humiliated in class by her or the object of her desire as in the case of Myung-ho. And yet, it is the ex-students and not Mrs Park who die suggesting perhaps a more complex reason for the murders. 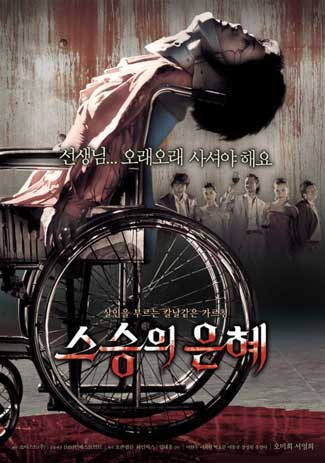 The set pieces are particularly inventive. Dal-Bang who is the first to die, is tied to a chair, his mouth clipped opened and made to swallow broken up razor blades. Eun-Young, his girlfriend is the second to die, and the masked killer staples her eyes open. Subverting the conventions of a typical horror film, the death of Sun-hee is far more protracted than that of his fiancé. I particularly like the fact that many Asian horror films are equal opportunity employers when it comes to death scenes. There are also a number of twists that make To Sir with Love one of the more interesting horror films to come out of South Korea recently. 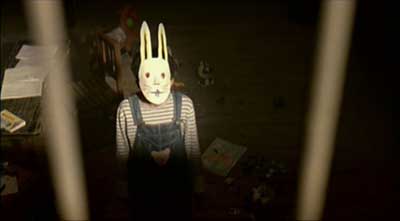 Despite the focus on cheap scares and bloody death scenes, To Sir With Love (Bloody Reunion) is also a critique of the repressive nature of the education system in South Korea, in which students learn to compete with each other for the best grades as the only way to ensure future success. Parents have been known to give gifts to teachers to help their children to achieve this – in To Sir with Love, Eun-young’s mother helps her to design a card for Mrs Park as they have no spare money, and is ridiculed by Mrs Park and the class for her efforts, while Jung-Won becomes the object of ridicule when she begins her period during class as the students believe that she soiled herself. 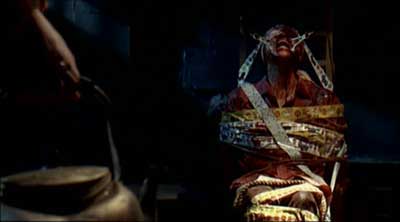 Like many other South Korean horror films, the trauma of the past reverberates in the present. Although the ex-students had made a pact to forget the past, they are in fact unable to do so when face to face with Mrs Park, the person who they blame for failure in adult life. If the young generation wants to forget but are unable to do so, the older generation, as epitomised by Mrs Park, only feels nostalgia, having recreated the past in her own image – refusing to take responsibility for the damage she did to her students. While Mrs Park says at one point ‘If we let it the past will cripple us’, the film actually suggests that we can only access the past through subjective memories, and that each person’s interpretation of that past may well differ. This is demonstrated by the manner in which teacher and students reconstruct their schooldays differently. 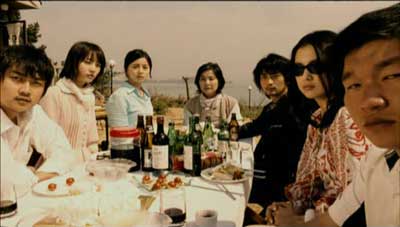 I am not sure why there are so many evil rabbits in horror cinema but there is something deeply scary about giant bunnies or people wearing rabbit masks, whether it is because the rabbit is the least threatening of domestic pets, I am not sure. What I do know is that To Sir with Love wouldn’t have been so effective if the killer had been wearing a cat or dog mask instead. The mask is of course a narrative device, by concealing the face of the murderer; it functions to increase narrative tension. The killer is eventually unmasked, but turns out not to who we thought it was. The shifts between short-term memory (the reunion) and long-term memory (elementary school) adds a degree of complexity to what seems at first to be a typical stalk-and-slash film, as does the eventual dénouement. To Sir with Love is well worth watching, and without doubt one of the best films of its type.