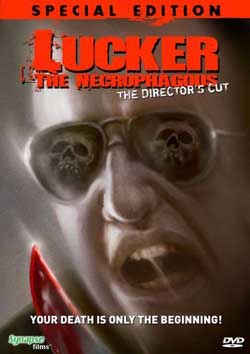 A serial killer awakens from a coma and escapes from a mental hospital to kill a survivor of his slayings years ago, all the while stalking, terrifying, and killing women on the way.

There are some movies that fall into the category of “cult classics” that you want on your shelf because they are simply amazing films, and there are others that you want just so that you have them. Lucker the Necrophagous, unfortunately, belongs to the latter category. It’s a movie that is worth seeing once, I guess, but its rarity is the main reason you’ll see it on your “cool” friend’s movie wall. Legend has it that once it was finished, the producers destroyed the negatives, leaving only pieces of the film director Johan Vandewoestijne was trying to make (okay, that’s not legend, that’s really what happened). This may or may not be due to the director not quite telling the whole story of the film to his potential monetary backers. Then again, the version of the movie currently in circulation today does not tell the whole story either, but for different reasons. 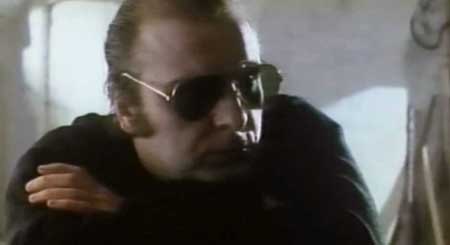 Lucker the Necrophagous is about a serial killer, John Lucker (played by Nick Van Suyt), who, rather than get caught for his crimes, attempts suicide but ends up in a hospital. He wakes up, sneaks out, steals a car, and escapes, killing a couple folks on his way out. He wasn’t going to be only charged with murder; he also raped the corpses of the young ladies he had murdered. But when he hears on the radio that one of his former victims, Cathy Jordan (Helga Vandevelde), survived her attack, he loses it and immediately tries to find her and finish the job. Luckily, all he has to do is check the phone book for her number and address (?). 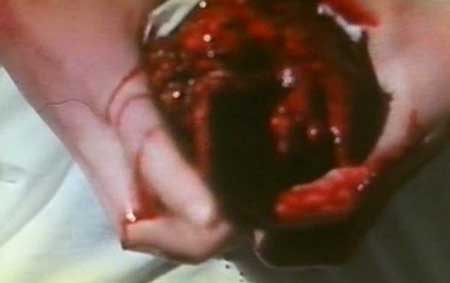 Between Lucker’s discovery of Jordan’s survival and the eventual climax of the film when he finds her, he slices up a handful of people, just enough to keep us involved in the somewhat choppy story. One victim, in particular, results in an especially nasty scene, one which “fans” of the film no doubt count among the (few) highlights. Amidst horrible dialogue, Lucker ties a prostitute to a bed and then threatens her with a knife, finally slitting her throat and letting her die for what seems like forever. But that’s not the sick part; in a scene that would within a year be revisited by Jorg Buttgereit in his classic Nekromantik, we advance four weeks. 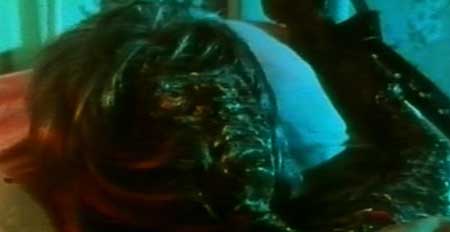 Don’t worry that Lucker is being hunted by the police, or that he never changes his clothes, nor apparently goes out to find food. The important thing here is that he also never disposes of the body, leaving the woman’s corpse to rot away in its final resting place, handcuffed and bound to the bed. The level of decomposition must be just to his liking, and he proceeds to make whoopee with the corpse of his victim. But not before caressing her special parts and licking the rot and decay from his fingers. 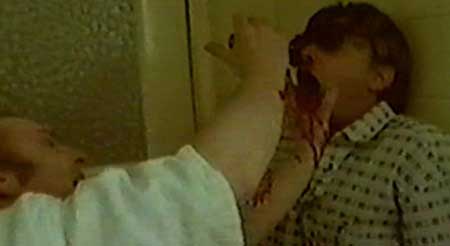 Lucker the Necrophagous is pretty short (weighing in just over sixty-eight minutes), but there still seem to be a lot of “filler” shots, extra scenes of city streets or long hallways and the like. Part of this could be attributed to the destruction of the negatives. We don’t know what the director’s original film looked like, but we do know a little about the story. Originally, Vandewoestijne had a journalist investigating Lucker, then becoming intrigued and looking to take his place. When Lucker finds out, he goes after the journalist before going on the killing spree which DID survive the producer’s destruction. I assume it’s this that can be blamed for the choppiness of the final product we have seen recently released on DVD, but this is not solely to blame for the movie itself. 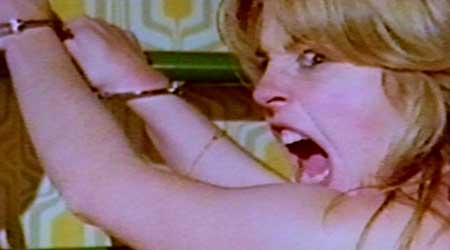 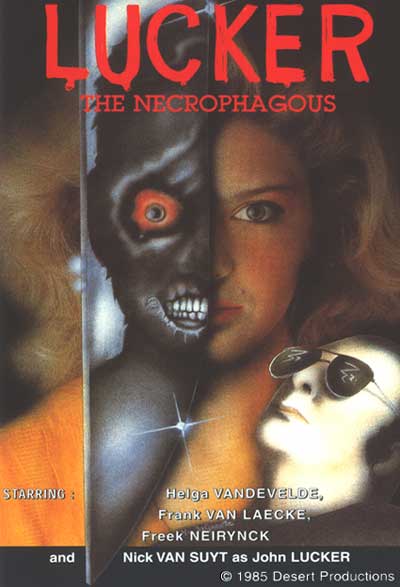 There are a lot of problems with this movie, from plot holes to editing issues to film inconsistencies. There’s really not much substance to the story. The dialogue is poorly written, then poorly delivered across the board. Sure, there is some nasty gore (specifically the scene I focused on above), but it unfortunately doesn’t make up for the rest of the bad. One redeeming quality the viewer may appreciate: with bad dialogue comes laughable lines, and Lucker the Necrophagous has them. From the “This is not my idea of a good time” of the prostitute who Lucker is about to kill to the “See you in hell, you…sucker” of the finale, there is enough schlock in the delivery of dialogue throughout this movie to create an enjoyable (and inebriating) drinking game.