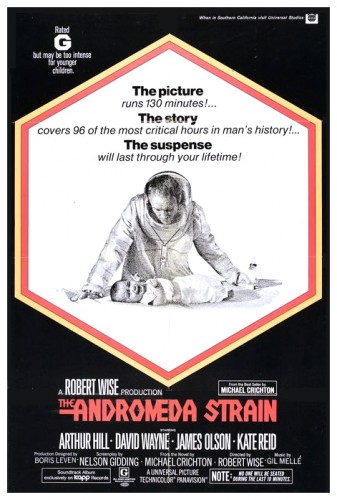 SYNOPSIS:
“When virtually all of the residents of Piedmont, New Mexico, are found dead after the return to Earth of a space satellite, the head of the US Air Force Project Scoop declares an emergency. Many years prior to this incident, a group of eminent scientists led by Doctor Jeremy Stone advocated for the construction of a secure laboratory facility that would serve as a base in the event an alien biological life form was returned to Earth from a space mission. Stone and his team – doctors Dutton, Leavitt and Hall – go to the facility, known as Wildfire, and try to first isolate the life form while determining why two people from Piedmont (an old wino and a six-month-old baby) survived. The scientists methodically study the alien life form unaware that it has already mutated and presents a far greater danger in the lab, which is equipped with a nuclear self-destruct device should it manage to escape.” (courtesy IMDB)

REVIEW:
Ever since Metropolis (1927), the image of little people dwarfed by great big machines has been at the heart of science fiction cinema. Along with that goes a less obvious image, of the people who tend machines taking on machine-like characteristics themselves. It is as if the logic and rationality required to construct a technological world has dried up the warmer human emotions. Whether or not this is true in real-life it remains central to science fiction, even in the original Star Trek, whose plots so often centred on Spock: Half soppy human, half unemotional Vulcan. An interesting and quite subtle illustration of all this is the underestimated The Andromeda Strain (1971) based on a novel by Michael Crichton – who soon after became a filmmaker himself, not to mention one of the best-selling authors of the late 20th century – and directed by Robert Wise, who had directed the classic The Day The Earth Stood Still (1951) two decades earlier. 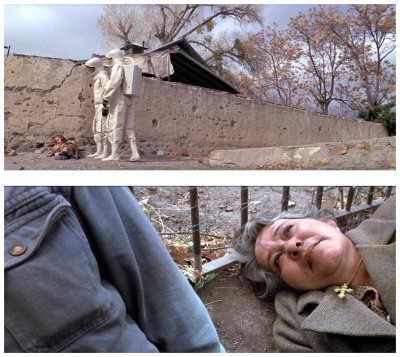 Two obsessions that often surfaced in seventies science fiction films were pollution and germ warfare, both of which tended to replace the atomic bomb as a source of exploitable material. The Andromeda Strain is unusual among science fiction films in that real science is one of the most important factors in the development of the plot, in fact the recreation of scientific procedure is the plot. This makes a pleasant change from most genre films, where the scientific content is arbitrarily thrown in as an afterthought along with the ‘love interest’ and the ‘comic relief’. Author Crichton had a solid medical background and, after graduating from Harvard University, he took a degree in medicine and later joined the Salk Institute. Wise and his scriptwriter Nelson Giddings – who also worked with Wise on The Haunting (1963) – decided to follow the novel as closely as possible and therefore reproduced its authenticity on the screen. 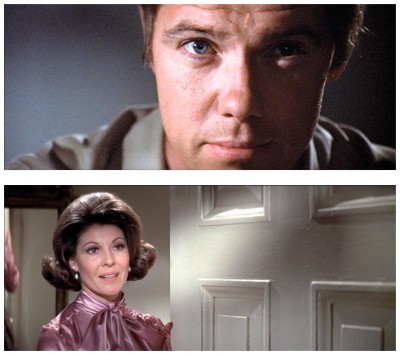 The Andromeda Strain tells the tale of an American satellite that crashes in New Mexico, followed shortly afterwards by the death of nearly everyone in the vicinity (except the old town drunk and a small baby). Apparently it carries an unknown micro-organism picked up in space but, then again, it might have something to do with germ-warfare experiments. An enormously elaborate isolation centre called Project Wildfire has been hollowed out beneath the desert and prepared by the United States government in readiness for just such an event, and most of the film consists of the efforts of a hastily assembled research team wandering through its dazzlingly antiseptic rooms, trying to pin down the cause of the plague and to find a solution. Their job is to discover the true nature of the alien organism code-named Andromeda, but things go wrong, there are personality clashes between the scientists (James Olsen, Arthur Hill, David Wayne, Kate Reid) and, by the time Andromeda’s secrets have been analysed, it mutates into a brand new organism with a whole new set of characteristics. 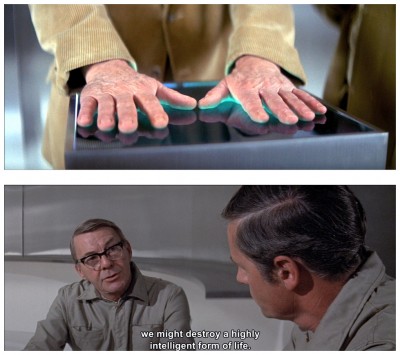 In a way, the film is an updated version of an old fifties monster-from-outer-space movie, but there is more to it than that. It can be argued that the villain of the piece isn’t Andromeda but technology itself. It’s technology that brings the virus to Earth, but proves useless in the attempts to combat the organism while at the same time remaining a threat to the human characters. Once sealed within Wildfire the scientists are totally at the mercy of its gleaming electronic innards, their every action monitored by the laboratory’s computer. The shiny austere machinery in this centre completely dwarfs the scientists, who themselves seem like micro-organisms in some gigantic technological body, and are so treated at the end when this body attempts to eliminate them as possible intruders. 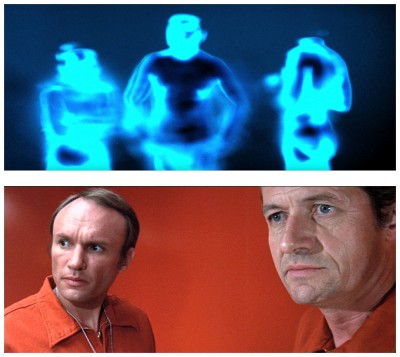 When Olsen penetrates the ventilation shaft during the finale, the computer activates the lasers because it presumes that one of the laboratory test animals has escaped. For all its apparent celebration of technology, the film conceals an entirely different message. It’s a strong message, as is the visual insistence on the scientists’ own humanity being diminished by their clinical surroundings. They come to seem machine-like too, even the baby is encapsulated in a plastic incubator. It is certainly a cold film, but more intelligent than it was given credit for being at the time. It is certainly one of the best films about helplessness and human irrelevance. Arguably, the most intriguing aspect of both the novel and film is that with all the scientific dialogue and experimentation going on, and the exciting finale in which Olsen desperately races to stop the detonation of a nuclear device, we almost overlook the fact that the scientists need not have been recruited in the first place. In regard to the bacteria, the same result would have happened without their presence, and their presence almost causes world destruction.

Crichton’s point is that it was thoughtless to have brought back such a bacteria from space in the first place (possibly to be used militarily). Once that happened, every attempt to correct the initial mistake causes new errors and cascading ramifications. Be that as it may, the electronic gadgetry in the film certainly looks impressive, as it should considering the budget topped US6.5 million. Much of the equipment actually functioned too, such as the powerful microscope system that included an inbuilt television camera behind the lens and, to enable the film cameras to record what appeared on the monitors, a special television unit had to be built with a two-thousand-line resolution, more than three times the normal number of lines. Most of this equipment was designed and constructed by technical effects man Douglas Trumbull, who would go on to direct Silent Running (1974) and Brainstorm (1983), as well supervising the effects on 2001 A Space Odyssey (1968), Close Encounters Of The Third Kind (1977) and Star Trek The Motion Picture (1979), but that’s another story for another time. Right now I’ll make my fond farewells, but please be sure to return next week with a stout heart, an iron stomach and a titanium bladder for another head-melting romp through the garden of unearthly delights known as…Horror News! Toodles! 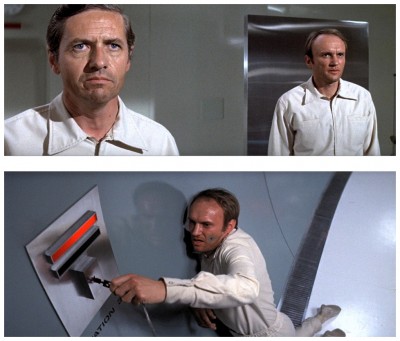