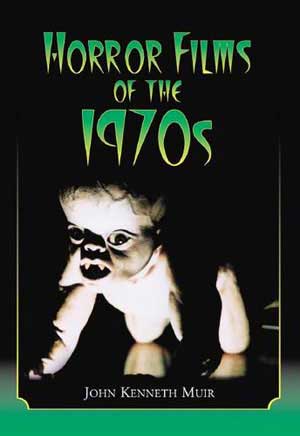 If you’ve perused our book reviews you’ll find the inclusion of several books dedicated to covering the horror films of the 70’s. This is not surprising as many consider the 70’s as the high point of horror film culture. Whether it was inventive, groundbreaking or just different, there is no arguing that what came out during the time period has produced many regarded as classics. The book “Horror Films of the 1970’s” is actually 2 books. A double volume set that is shipped as so and – Authored  by John Kenneth Muir.

I have seen my share, but this particular offering intrigued me the most. As we know, there are several films in that era that have had entire books dedicated to them, so if was good to see a set of editions that gives credit where credit is due. The norm to this point has been either 70’s books that pick and choose a handful to cover alot of or a summarized edition that just gives quick overviews of alot of films.

The attraction for me was a a sufficient amount of coverage to important titles. Volume 1 covers 1970-1975, while volume 2 covers 1976-1979. Combined the editions cover almost 700 pages worth of reading materials. An impressive effort from any writer.

Features! The books begin with a easy to find table of contents that lists each film according to its year and location in the book. So while they are in alphabetical order, they restart with every year listed. Volume 1 begins with a lengthy history of the decade. A welcome and expected overview of the span of films and film culture during that period. v

V olume 2 ends with a feature I especially enjoyed. “Film conventions of the 1970’s”. No not the kind you attend, but the classifications of certain films. For instance “When animals attack”, Blaxploitation”, or “Zombies”…etc We get the lists of horror films that fall into these classes just in case you want to do 70’s “demon night”. We also get a few pages of recommendations, noted actors and my favorite “memorable movie lines”. Muir has rounded off this collection very nicely just as fans would prefer.

On to the reviews! As mentioned each title gets its share of coverage. So we get quite a few pages with greats like “Carrie”, “Jaws”, Halloween”, Magic” and “Hills have Eyes” (to name a few) Even noted, but slightly lesser known achievements like “Manitou” get a fair handshake as well. The there is a the quaint few such as “the Night Daniel Died” that only gets a paragraph. This is due to a few things, the film may be obscure and hard to track down or simply low on the radar to any reader. That’s Ok, as I’d rather my time be spent reading the nice homage to “Tourist Trap” and “Phantasm”. The reviews follow a formula of cast listings, synopsis and then commentary.

The commentary of course will be the most interest with its degree of overviews and fact reporting. Muir spells it out like it is, using comparisons, opinions and suggested imagery solutions for the viewers. The writing here is very well done and told in a way that illustrates the visual aspect to a great degree. For instance in the film “I spit on Your grave”, Muir gives a great commentary ont he movement of rape and revenge films, citing the influence, similarities and relationship it had with other films of its genre. Further reading digs into the issues of victimization, sexuality and woman dominance portrayals.

Wishful thinking? This kind of coverage is the kind that deserves a permanent space in horror aficionado libraries. It may be alot to ask but I’d love to see this continued with 80’s, 90’s and 2000’s editions as a reference books. For some reason even with as many 70’s film books on the market as there is, I still enjoy these fully repetition or not. Muir has a comfortable writing style that makes the reading that much more enjoyable.