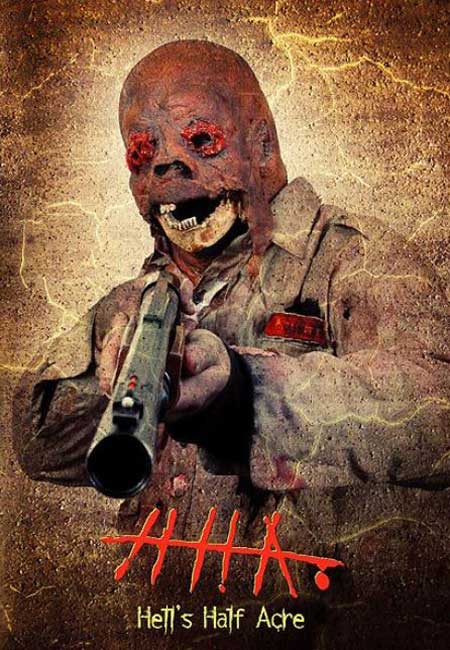 An ambitious maniac stalks the residents of a small town.

If you’re into stripped down, bare bones, no nonsense, all killer no filler horror, I’ve got something for you to check out. Hell’s Half Acre (directed by the duo of Scott Krycia and Sean Tiedeman) is a low budget slasher movie very much in the vein of The Town That Dreaded Sundown, but with the carnage of a Nikos the Impaler. Just as impressive as the fact that this is the directing duo’s FIRST effort (it’s Krycia’s only movie to date, but Tiedeman has done a couple other “behind the scenes” shorts as well as the documentary The King of Arcades) is the lengths they were able to stretch a very low budget. This movie looks a lot better than so many movies with far larger budgets, and you can tell from the start that there is just as much love for the genre put into this film as there is cash money. 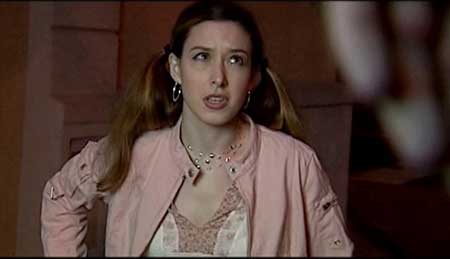 Hell’s Half Acre starts with a “7 minute paid ad” for a group called the Wake Up Call for Parents, a PMRC-style group crying about violence on TV and in the movies. This approach by the film-makers easily could have backfired, immediately raising the bar as to what should be expected in the film while simultaneously opening a horror movie with a very non-horror intro. Get through it and it pays off, I promise. We go back 10 years ago (as the screen tells us), and we watch as a group of guys searches through a series of tunnels, looking for someone. What they find are multiple “someones,” all of them young women, and all of them dead. As payback, they head up to the house attached to said tunnels, tie the owner, Bob Moore, up to a chair, douse him with gasoline, and let the whole place burn. The thing is, they also tie up his innocent young son, Derek. You have to figure that’s gonna come back and bite them later. 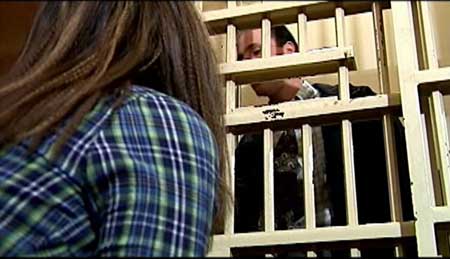 After a new report that tells of the house fire, the murders of the two, and the discovered tunnels under the house, skip forward to the present and meet your antagonist. We see a young couple parked in a truck off the road, the typical guy pushing for sex and the girl (Nicole, our protagonist, played by Tesia Nicoli) having to fend him off. But then she sees something, off in the distance. A man? With a sledgehammer? He disappears, only to reappear, almost Frank Zito/1980 Maniac-style, right at the truck, which he proceeds to absolutely destroy, along with the bro inside. Nicole gets away, goes to the police, and tells them her story. But by now, the onslaught has already begun, and no one is safe. It doesn’t matter if you’re a cop with a gun, a preacher at church, or a kid playing basketball, whoever this burned-up looking dude is, he will kill you. And it seems the only person who might be able to stop this maniac is the girl who got away – Nicole. 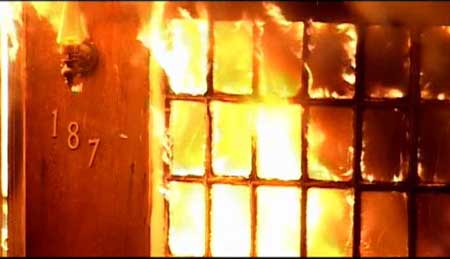 Honestly, I think the best part of Hell’s Half Acre is its borderline over the top approach with regards to the killer. It’s not just a violent and bloody movie, but it’s a FUN violent and bloody movie. The killer looks to be wearing maybe a gas station attendant’s coveralls, yet somehow he is carrying more weapons than even imaginable. We’re talking heavy artillery here, in addition to the hammer and the machete and various other killing tools. He chops heads off, he blows brains out, and he doesn’t seem to worry about a specific target – as I mentioned before, it seems the only qualification you need to be on his hit list is to be breathing. 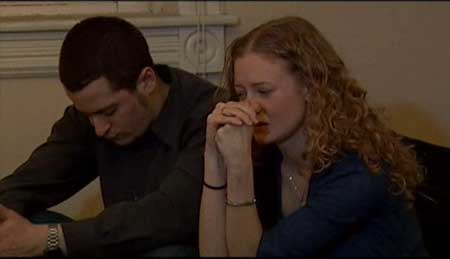 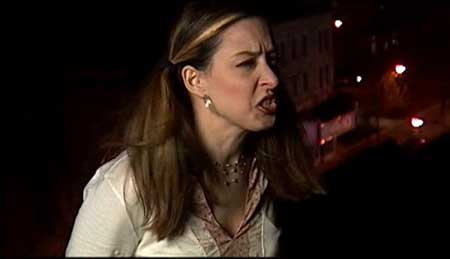 The acting, by a bunch of relative unknowns, no less, is pretty good. The violence and bloodshed is over the top and fun, never mean for mean’s sake. The body count is high – very high, in fact. What they were able to do with a shoestring budget is pretty impressive. My only complaints about Hell’s Half Acre are minor, almost petty; the intro footage seems better maybe as an extra on the DVD, and the explanation of the maniac killer’s identity is a little unoriginal and expected. But you know what? This movie, with a running time of only about an hour, is fun, it’s action-packed, it’s very well done for a couple of beginners, and it delivers over and over again. This is one of those hidden gems that I love finding in this job, a movie that I’d never heard of but quickly become a big fan of. You should track this one down, you won’t regret it.