Locke and Key: comes to television 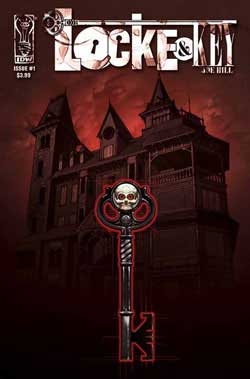 Joe Hill’s comic book Locke and Key is eschewing a run in theaters and will instead be adapted for television. Alex Kurtzman, Robert Orci, Steven Spielberg and Josh Friedman will oversee the project. Hill, son of Stephen King, also penned “Heart-Shaped Box” and “Horns.”

Distributed by IDW Publishing, “Locke & Key” tells of Keyhouse, an unlikely New England mansion, with fantastic doors that transform all who dare to walk through them…and home to a hate-filled and relentless creature that will not rest until it forces open the most terrible door of them all.

Friedman (Terminator: The Sarah Connor Chronicles) will write and produce. Kurtzman and Orci recently signed a deal with 20th Century Fox TV, so the studio will end up producing with Spielberg’s DreamWorks TV