Dario Argento’s TENEBRAE Due on Blu-ray in the UK 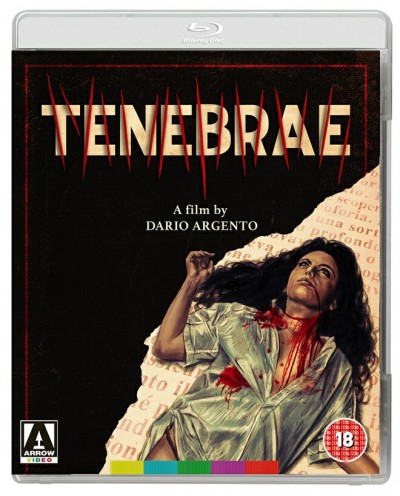 Dario Argento’s Tenebre, or Tenebrae depending upon how you want to spell it, is widely regarded to be one of the director’s best films. Shot between Inferno, his 1980 follow-up to Suspiria, and his personal favorite film of his, 1985’s Phenomena, Tenebrae is his 1982 return to the giallo subgenre and will be released on Region B Blu-ray in the UK on January 19, 2015. If you have a region-free player here in the States, this is what you can expect to see when the disc streets in just over a fortnight. From the press release:

A notorious horror classic returns in all its depraved glory. This infamous video nasty updated the classic Giallo blueprint for the gorified 80s, courting controversy and drenching the viewer in crimson arterial spray.

A razor-wielding psycho is stalking the horror writer Peter Neal, in Rome to promote his latest work, Tenebre. But the author isn’t the obsessive killer’s only target, the beautiful women who surround him are doomed as one by one, they fall victim to the murderer’s slashing blade…

Will fiction and reality blur as fear and madness take hold? Watch in terror as by turns the cast fall victim to the sadistic imagination of Dario Argento, Italy’s master of horror.

The Unsane World of Tenebrae: An interview with director Dario Argento

A Composition for Carnage: Composer Claudio Simonetti on Tenebrae

Goblin: Tenebrae and Phenomena Live from the Glasgow Arches

Exclusive collector booklet featuring writing on the film by Alan Jones, author of Profondo Argento, an interview with cinematographer Luciano Tovoli and an appreciation of the film by director Peter Strickland, illustrated with original posters and lobby cards