Song of the Shattered: brutal pics from controversial new film

Wolfpak Industry Productions (producers behind the recently wrapped “15 Till Midnight”) and Death Factory are pleased to announce their sure to be controversial new film “SONG OF THE SHATTERED”. Principal photography is under way in Eastern Pennsylvania, and the film is directed by Wolfgang Meyer (15 Till Midnight). Certain scenes will also be directed by Tara Cardinal. 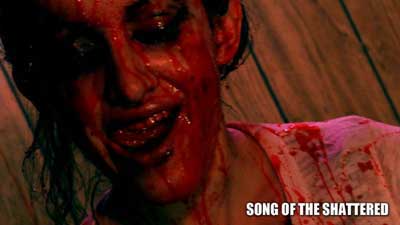 The film follows a young woman named Angela – portrayed by Devanny Pinn (pictured below; 15 Till Midnight, Piranha 3D) – who kills her abusive husband after being viciously raped after she had finally gained courage enough to leave

him. Over time she finds that it is harder to move on with her life than she immediately thought it would be, which yields horrific results for those closest to her.

The film takes a very serious stance in regards to sexual abuse, domestic violence, and recovery – all under the guise of what the producers are referring to as a “psycho-thriller”. The film also stars Brandon Slagle (15 Till Midnight, Kinky Killers), Tara Cardinal (Legend of the Red Reaper, Delivery), Deneen Melody (Slices of Life), Jess Weber (Terminal Descent), and Joe Hollow (Diary of Death). It is loosely based on true events.

Scenes from the film will be premiered at the Viscera Film Festival in Los Angeles on July 17th, during which Devanny Pinn will be a special guest. Additional screenings will follow in select cities throughout the rest of the year.

Tags Song of the Shattered