Patrick: Evil Awakens (2014) is a modern retelling of the 1979 Aussie hit, Patrick. In the remake, Sharni Vinson steps into the lead role as the nurse taking care of the titular character who lies in a coma at a private psychiatric hospital. If you have seen the original, you know that Patrick holds a deadly, terrifying secret. The grue-crew get the opportunity to view and recap the film on this episode of Horror News Radio.

Santos Ellin Jr. steps in for Thomas, who is off to SXSW, to provide this week’s Top 5 discussing five obscure films that deserve a remake. Dave is back again with the Horror News of the Week discussing the Godzilla trailer, the next Terminatorfilm and more information about the possible remake of Alfred Hitchcock’s The Birds.

Co-hosts Doc Rotten, Santos (The Black Saint) Ellin Jr., Dave Dreher and Vixen are back again this week for another fantastic episode of Horror News Radio, the official HorrorNews.Net podcast. BUT FIRST! Before we get too far into this episode’s fantastic content, BIG NEWS! Announcing, the HNR grue-crew are going on the road with a horror convention tour spring 2014 beginning with The Mad Monster Party in Charlotte, North Carolina, March 21-23. SEE YOU THERE! Be sure to go to their Facebook page and give them a like. Tell ‘em Horror News Radio sent you!

00:06:00 – Patrick: Evil Awakens
The HNR grue-crew often share their love for actress Sharni Vinson who impressed in You’re Next. She is back with Patrick: Evil Awakens, a remake of the Richard Franklin film from 1979. Going into the film, the crew is a little nervous of what they will find wondering if Patrick is a good choice to be remade. Thankfully, the response is unanimous, each host giving the film high marks enjoying the modern take, gorier, more frightening and with a great cast. Dave even compares the direction to Brian de Palma. What? Yes, he did. 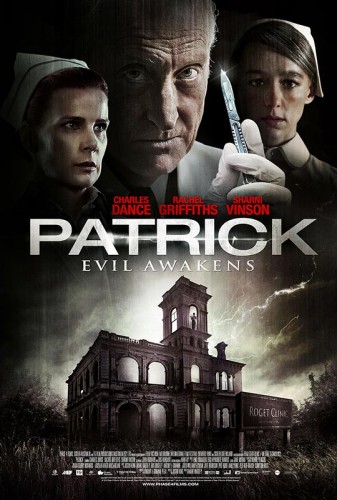 00:34:34 – Horror News of the Week for 02/24/2014
Dave Dreher starts off the Horror News of the Week with the announcement that Vincent D’Onofrio has joined the cast for Jurassic World. With all the remake talk is it really that surprising that word of the remake of The Birds is resurfacing. Terminator: Genesis news is up next where the creative team behind the script are saying it resembles Back to the Future 2. What? The Godzilla trailer is just too damn good to not bring up this week. Roar, baby, roar! And, of course, everything is better with a little Bacon and Dave shares the commercial Kevin Bacon stars in where he reprises many of his famous roles including Friday the 13th (1980). Wow! Finally, Bacon owns up. Yay!

00:51:50 – Top 5 Horror Films Needing a Remake
The Black Saint steps in for Thomas to bring his Top 5 for the week. Sticking to the theme of remakes with the film Patrick: Evil Awakens, Santos compiles his Top 5 horror films that deserve a remake in the eyes of the HNR Grue-crew.