Home | Giveaway: CARRIE – Get Your Blu-ray Copy For Free

Giveaway: CARRIE – Get Your Blu-ray Copy For Free

CARRIE said she wants YOU to have a Blu-ray copy and all you have to do is email joyhorror@horrornews.net and put CARRIE in the subject line.  You’ll be entered to win a Blu-ray copy of CARRIE courtesy of HorrorNews.net!   United States ONLY.     Please put your full name and complete address in the body of the purchase order. 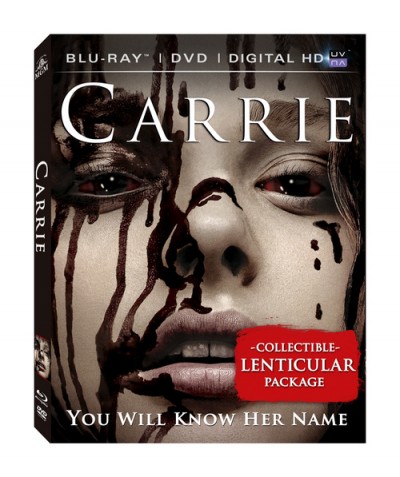 Hurry into stores to get a dose of Carrie on DVD and Blu-ray, January 14th!

The third time is a third Charm for the reimagining of Carrie! First evolved from a Stephen King novel into a film in 1976, and back to film again in 2013, Carrie just keeps coming! Carrie is a remake of the classic horror tale about Carrie White (Chloë Grace Moretz), a shy girl outcast by her peers and sheltered by her deeply religious mother (Julianne Moore), who unleashes telekinetic terror on her small town after being pushed too far at her senior prom. To get you ready for Carrie’s third debut into the world, we have compiled a list of memorable moments from the originally Carrie to help jog your memory… and maybe scare you a little bit.

The shower of death?
When Carrie is showering at school she is hit with her first period at age 17. She freaks out because her mother has never talked to her about these womanly changes (I guess that’s why they have health class nowadays). Carrie thinks that she is literally bleeding to death, until all the mean girls start throwing tampons at her.

Big news times 2
When Carrie decides to tell her mom that she is going to prom, and oh by the way, casually thinks she has telekinesis, her mother automatically thinks she a witch.

Bloody hell
Carrie ends up going to the prom and actually is having a fun time. Things seem to be going too well, which clearly means someone is up to something. A bucket of pigs blood is dumped onto Carrie’s head as she is crowned prom queen and her telekinesis takes over, killing almost everyone in the gym.

Mother Daughter Bonding
Carrie runs home and cries to her mother, expecting some sort of sympathy or motherly advice. It is now that Carrie’s mother hugs her in an effort to comfort her, but then literally stabs her in the back.