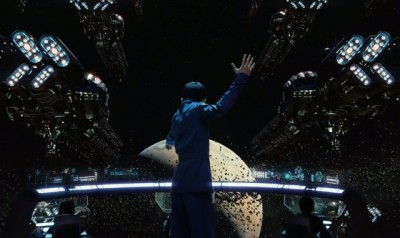 Horror News Radio co-hosts Doc Rotten, Dave Dreher, Santos (The Black Saint) Ellin Jr., Thomas Mariani and Vixen have mixed feelings on the results. Some of it works for most all the grue-crew while many have issues with the pacing, the characters and, in Dave’s case, the film altogether. Doc tries to defend Ender’s Game with only moderate success.


Dave continues with the Horror News of the Week and shares his visit to Robert Kurtzman’s Mad FX Studio for a Halloween party where the guest of honor was none other than Freddy Kruger himself, Robert Englund.

00:04:00 – Review of Ender’s Game (2013)
The grue-crew venture into Sci-Fi territory this week as they review Ender’s Game from Gavin Hood. It does have aliens – well, almost. It does have bloodshed – uh, no, not really. Gasp, the horror in Ender’s Game is the realization of the effects of Harrison Ford’s character’s manipulation of the young cast. It is devastating, an emotional hit to the gut. While Dave zoned out pretty quickly, Doc and Vixen generally liked it while both Santos and Thomas had stronger issues.

00:47:56 – What Have You Been Watching: Dave meets Robert Englund
Dave was fortunate to attend a special Halloween event at Robert Kurtzman’s Mad FX Studio to support his school the Kurtzman Institute of Art. The guest of honor was Robert Englund the talented madman who plays Freddy Kruger – and is featured in over 140 films. Dave shares the event and his meeting of the modern horror icon.

00:52.31– Horror News of the Week for 11/04/2013
Dave rocks the horror news of the week beginning with news that Samuel L. Jackson has joined fellow 1408 co-star John Cusack for the screen adaptation of Stephen King’s Cell to be directed by Paranormal Activity 2′s Tod Williams. A pair of directors are up next with George Romero commenting about the lack of zombies in The Walking Dead and David Cronenberg cutting Stanley Kubrick below the knees for the lack of horror in The Shining. Thomas is not terribly interested in hearing about Eli Roth’s The Green Inferno which had footage premiere this week. Michael Biehn finally released a trailer for his film Hidden in the Woods that is truly disturbing. And the Archie comics are going un-dead with Afterlife with Archie.