The Conjuring scares up boffo-box this weekend, smashing records and trouncing the competition. Co-hosts Doc Rotten, Dave Dreher, Santos (The Black Saint) Ellin Jr., Thomas Mariani and Vixen recap and discuss the film, the cast and the director, James Wan. #ScaryAsHell Indeed! Dave steps in to bring the horror news of the week and Doc announces another contest.

Ed and Lorraine Warren are the original ghost hunters seen as the experts in paranormal activity back to the 60’s and 70’s. James Wan’s The Conjuring shares one of their most frightening tales, untold for four decades. The result is one of the scariest films of this decade. The grue-crew dissect and discuss the film in length with a spoiler-filled review (but they don’t give everything away, no sir). Patrick Wilson and Vera Farmiga are wonderful as the Warrens and Lili Taylor is extraordinary as the matriarch of a family haunted by restless spirits and unexplained demonic forces. Scary as hell only begins to describe The Conjuring.

Dave steps in to calm their nerves with the horror news of the week. First up is the Emmy Nominations including a best actress nod to Vera Farmiga as Norma Bates in Bates Motel. But the big announcement is the 17 nominations for American Horror Story: Asylum. Insane! Next up is the announcement of Anchor Bay Entertainment and Trancas International Blu-ray release of the 35th anniversary of John Carpenter’s Halloween. Amazing! NBC sneaks in with another trailer for the October 25th premiere of their Dracula TV series starring Jonathan Rhys Meyers as the fanged count. The trailer is full of blood, violence and late 19th century costumes. Exciting! In YouTube land, Dave shares a information about a video that compares Oz, the Great and Powerful with Army of Darkness, frame by frame, beat by beat. Uncanny! Last is news of all about SyFy’s Sharknado – more showing of the original while the sequel takes the sharks to Manhattan. Incredible!

The Official HorrorNews.Net Podcast has another contest to win fun, creepy, horror prizes. This time around it is the Blu-ray for Francis Ford Coppola’s horror film, Twixt. Described as “an homage to his lifelong love of the horror genre,” Twixt, out now on DVD and Blu-ray from Twentieth Century Fox Home Entertainment, tells the tale of Hall Baltimore investigating a small-town murder that involves nightmares, ghosts and horrifying revelations. HorrorNews.Net Podcast has a copy to give away to one lucky listener. All you have to do is email an answer to the question below along with your name and address to docrotten@horrornews.net with “Twixt” in the subject line. 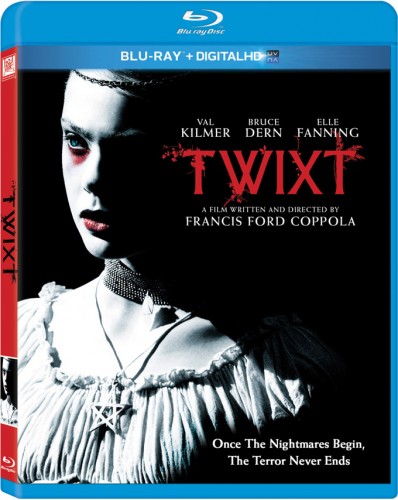