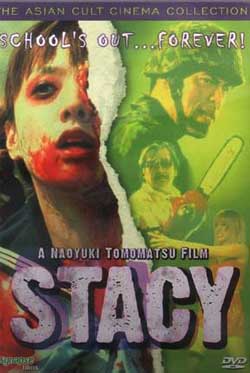 A mysterious, worldwide phenomenon is afoot that is causing teenage girls to inexplicably drop dead and, almost instantly, reanimate as zombies with a hunger for human flesh. These zombies are known as ‘Stacies’.

It’s amazing no one thought of it before. Here we have two of the more ubiquitous features of modern popular culture—zombies and Japanese schoolgirls—together in one film. It’s easy to imagine the idea being pitched to a panel of cocaine-addled execs as a surefire moneyspinner, aimed squarely at the pizza-munching, basement-dwelling bachelors of the suburban West. Brought to our screens by the director of such titles as Rape Zombie: Lust of the Dead, Erotibot and Vampire Girl vs. Frankenstein Girl, this offering was never going to be Oscar bait. The thing is, it’s actually not half bad. 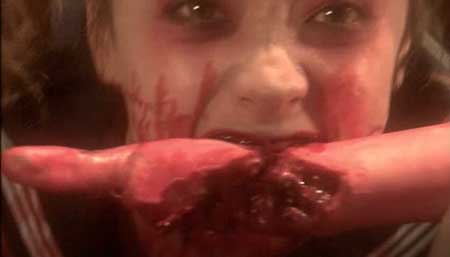 Apparently shot on digital video, it has the giddy, cheap-and-cheerful feel of a Troma film, belied by some excellent performances from the cast and deceptively high production values. In particular, the makeup and prosthetic effects are often superb. One scene involving an experiment on a young girl’s corpse is especially impressive, given that it is clearly done with physical special effects, rather than CGI. Certain parts of the film are so well shot and professionally lit that it is easy to forget that you’re supposedly watching a trashy exploitation film. 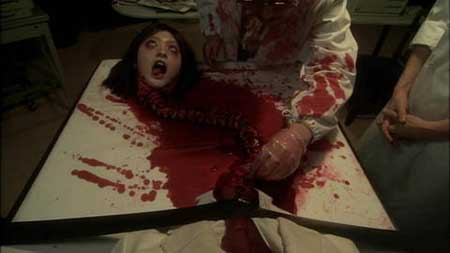 What makes Stacy so watchable (apart from the wonderfully over-the-top gore and the… well… zombie schoolgirls) is the fact that its tongue is planted very firmly in its cheek. The film takes a few pot shots at consumer culture, but not in the heavy, allegorical manner famously adopted by Dawn of the Dead. Rather, it pokes fun at Japanese consumer culture and popular culture as a whole in a strangely gentle and affectionate manner. The references to Ash’s chainsaw in the Evil Dead trilogy (and thus to his department store job—‘Shop smart. Shop S-MART!’) are supported by excerpts from fake shopping channels, and there are staged television interviews which recall Night of the Living Dead. In the latter, we are introduced to the evil, Moreau-style mad scientist, Dr Inugami Sukekiyo. He bears more than a passing resemblance to the Japanese cannibal/murderer and television celebrity Issei Sagawa, and is one of the most memorable characters in the film. 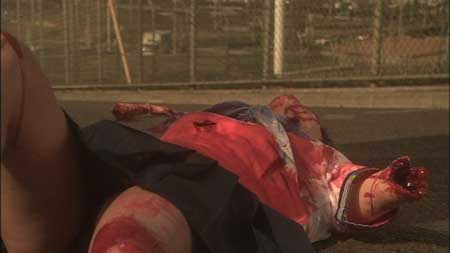 Stacy also knowingly incorporates another classic Japanese trope beloved of our Western basement-dwellers—‘hot chicks with weapons’. These are the improbably named ‘Drew Illegal Repeat Kill Troop’, a trio of nubile young lovelies united by their fighting proficiency and their admiration for Drew Barrymore (‘She’s our idol!’, as one of them enthuses). These provide comic relief early in the film and really come into their own at the climax, which is a series of very good action set pieces with lashings of gore and chewed-up latex body parts. 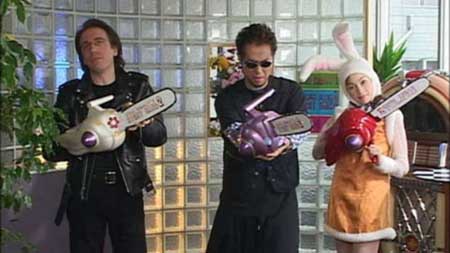 Between the action scenes, the movie tends to pitch its mood somewhere between comic and unsettling. Many scenes are simultaneously hilarious and very creepy. Ostensibly poignant moments are wilfully sabotaged by truly awful music that seems to be ripped right out of a corporate staff training video. This musical bathos is perhaps an oblique tribute to George A. Romero (the film is awash with references to him and his Dead trilogy, with the emphasis particularly heavy on Day of the Dead). Sadly, the joke is repeated too many times in the film, and it eventually becomes rather irritating. 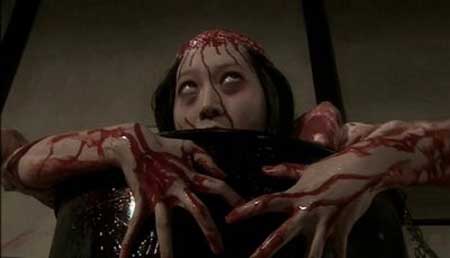 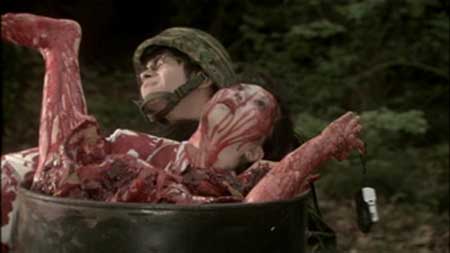 And here I come to my major criticism of the film. There is a crescendo of darkly comic and superbly orchestrated violence ten or fifteen minutes before the end of the film. What follows is not merely a boring and pointless denouement, but a series of them. The film veers into a dreamlike, quasi-poetic and quite incoherent sequence where nothing much happens, apart from the repetitive exploration of an idea that is not as clever as it seems to think it is. It doesn’t quite reach the soporific extremes of, say, The Return of the King, but it is enough to seriously detract from what had been up to that point a very enjoyable film. That criticism aside, Stacy is a lot of fun and certainly worth checking out.