Zombie fans in the US can get their hands on hit British zombie movie Stag Night of The Dead from today, as it launches exclusviely on iTunes US ahead of its May 1st DVD release.

This a hilarious zom-com is set after an outbreak of the undead has been contained, and sees a bachelor party take on a host of freakish zombies. Soon-to-be-married Dean and his crazy buddies hire a sexy stripper and for the ultimate guys weekend – they go to play ‘Zomball’ a laserquest-type game where you get to shoot captured zombies.

Since the zombie apocalypse, private companies have been offering unique ways of disposing of the undead, and here they are used purely for sport. Of course, things go wrong, when the guys break the rules, and their bachelor party fun soon turns into a game of survival. Suddenly, the in-laws are the least of Dean’s problems!

Tags Stag Night Of The Dead 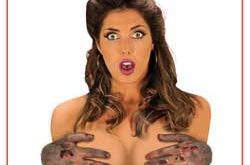