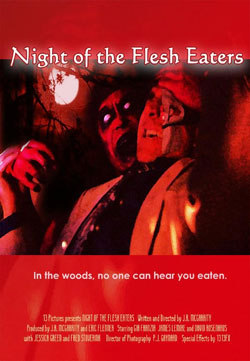 Hey creepy freaks and sexy minx! J.R. McGarrity stopped in to answer our 5 questions about his new movie NIGHT OF THE FLESH EATERS! Get the rundown here and stay tuned for our full interview coming up soon! So kick back, sit back, and relax and get the low down on this new creature feature:

What is the movie?

NIGHT OF THE FLESH EATERS is a comedy/horror creature feature. It was shot on Hi Def and is 82 minutes long

Who are you and who stars in it?

I’m the writer/director/producer/editor, head cook and bottle washer. Gia Franzia Plays the “Blond Woman”. She also starred in SPECIAL DEAD about a zombie breakout in a camp for the mentally and physically challenged. James Lemire plays the “Assassin”. Jim does a lot theatre around Los Angeles. David Rosenhaus plays the “Fat Cat”, jilted husband of the Blond Woman. Fred Stoverink is in the supporting role of the “Goon”. Fred has accumulated quite a few guest star roles and does a lot of voice-over work. Jessica Green is in the supporting role of “The Young Woman” who runs around the dark forest in her bra and panties, gotta have one of those in a movie like this. And I make a surprise appearance in the supporting role of “Evil Shaman”. I say surprise because somebody else was cast and didn’t show up and we had to shoot and I was the only one who knew the lines.

Where was the movie filmed?

The movie was filmed entirely on location in Angelus National Forest about 50 miles from Los Angeles, except… We did shoot the scenes in the cave in the studio of our creature builder, Tom Devlin. I think HorrorNews.net is putting up an interview with him soon. His shop was in Alhambra, CA. And we also do some re-shoots of a couple of the final car scenes in a friends studio, “Basso Scenery and Props” shop in North Hollywood, CA. 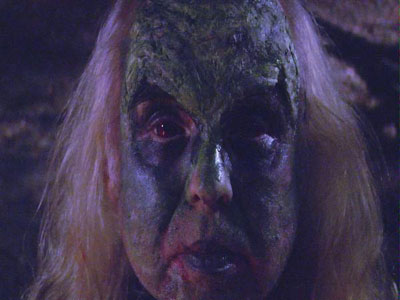 Why did you decide to make this film?

I decided to make this film because I just just can’t stop myself! I was going to do a short film with a big turn around at the end. It was going to be shot outdoors by a campfire, in the woods, etc. The script just kept getting bigger and bigger. I wanted to try my hand at a creature feature, such as I in my inimitable style would do a creature feature. And I wanted to shoot something that had a relatively small cast and could be shot entirely out of doors, that is to say all exteriors. I have a small but significant amount of Native American blood… my great grandfather was full blood Indian, FBI. And I’ve been somewhat interested in Native American folklore for a number of years. So I took a bunch of obscure and interesting (I hope) Native American, flesh-eating, critters and pitted them against some city folk lost in the woods. 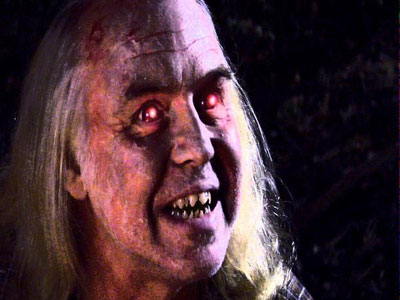 When will the movie be released?

Don’t know about the release date, yet. I’m hoping to hear from Netflix soon (fingers crossed) and I’ve got a foreign distributor whom I’m in the early stages of discussions with. The movie is available on the website and at Amazon still, I think. 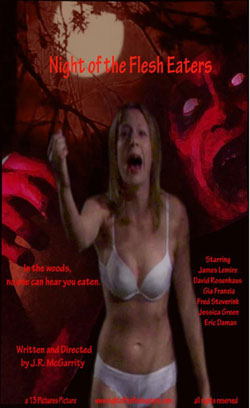 For an advanced copy of NIGHT OF THE FLESH EATERS go to
www.nightoftheflesheaters.com

Thanks for stopping by and make sure you check out this ‘killer’ movie! :) 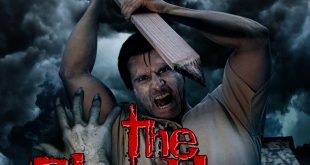 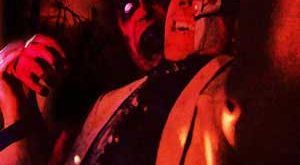