Every horror fan knows that horror films have more stereotyped characters in them than a rabbi, priest and a black guy who walk into a bar. But why is this? Is it because these types of people are so easy to make fun? Or is it because there is just a shortage of original ideas for characters? Look at it this way, we all like to see the dumb blonde die, or the stupid teenage get his head chopped off, it helps us sleep at night. But we don’t want to see the mother of 3 get tortured, or the five year old girl who was in the wrong place at the wrong time, get her tongue ripped out. This is why time and time again horror films put in the stereotypical characters, which no one really cares about, as bait for the villain, so the audience can have no shame in yelling “Kill her!! Slice her neck!” at the movie screen or TV.

So without further ado, I bring you the top ten most stereotyped characters in horror films. But with this list you must pay attention to the order. I am ordering these characters in the order of how long they will stay alive, starting with number 10 being the first to die and so on.

10. The Black Guy – When is the last time you saw a horror film where the Black guy lived? Yeah, that’s what I thought, never. The Black guy is always muscular and usually the first one to go through a door. It is this leadership quality that all horror movie Black guys possess that ultimately curse them into a few short lines and usually a quick death before the first 15 minutes of the film. However, the Black guy does serve a purpose in horror films. Since he is the first to die he gets the ball rolling and lets the audience and the character in the film know that a killing spree is about to begin. 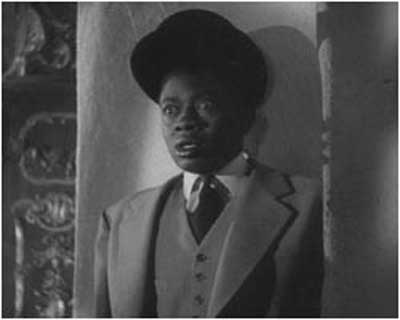 9. The Non-Believer – This role can be a guy or a girl, usually an atheist and sometimes they can be a bitch. They also take the place of the first character to die when there is no Black guy. The non-believer is the character that typically has classic lines such as, “There are no such things as demons”, “No one in their right mind would come out here” or my favorite “I’ll prove to you that nothing will happen if I read from this book”. Usually this line occurs after a few things have gone bump in the night, or the power has randomly gone out. It is also the non-believers last line of the film. Finally, when this line is said, the sh*t hits the fan and like when the Black Guy dies, a killing spree is right around the corner. 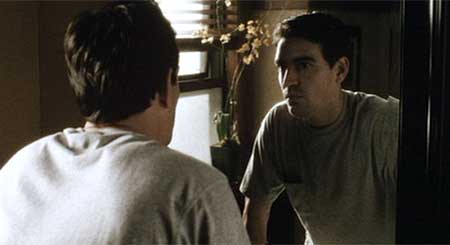 8. The couple having sex – These characters are usually all over each other up to the point where they are killed. Usually they are away from the rest of the group when the Black guy or non-believer is killed, so they are unaware that there is a killer loose. Also, another characteristic of these characters is that they are usually killed during sex. Typically the guy is killed first, perhaps like in the case of Friday the 13th when Kevin Bacon gets stabbed through the chest while a girl is on top of him. Then, after the girl screams for a while and is usually covered in blood, the killer will attack the girl killing her. The good thing about the couple having sex is that they are mentioned later on in the film when someone asks, “Hey where are John and Jane?!” usually starting a search party that ends in more deaths.

7. The Blonde – Usually a close second in level of attraction in the cast. The Blonde is typically dumb and a slut, sleeping with everyone she can. She is loud and annoying and always chewing gum. She can sometimes be the female in the couple having sex. The Blonde is the girl that you would wish would die sooner. She is normally the one that gets the viewer shouting “Kill her!” She somehow escapes death on several occasions, but when she finally meets her maker, her death is graphic, with possible nudity and the viewer rejoicing.

6. The Jock – This guy is always dressed in a letter jacket of some sort and may or may not be carrying either a baseball or football. The Jock is not as muscular as the Black guy, but he is not far behind. Like the Blonde, he can be the male of the couple having sex. The Jock’s death is usually a suicide. He is in love with the Blonde and when she dies he has nothing left to live for. After a few shots of alcohol and finding a suitable weapon, the Jock heads out to find the Villain, but never returns.

5. The old dude – This man can be anywhere from 35-50 years old, depending on the age of the other characters. This character always has some kind of traumatic story or some history that ultimately helps him survive till the last 3rd of the movie. He is sometimes out casted by the rest of the group because of his age, but usually he is the one that all the characters come to for advice in the end. In sequels the old dude might be a cast member from the original film that is being forced to relive the nightmare he experienced long ago.

3. The Sexy Bitch – This girl has one role, eye candy. Her main purpose through the entire film is to take off her clothes and look good. She is always the most good looking girl of all the cast and is very “gifted.” She is sometimes dumb, but not as dumb as the Blonde. She sticks around through the majority of the film, that way if the movie sucks you can at least wait for the parts where you get to see her boobs. Her death is usually long and drawn out. She might get stabbed through the leg and as she crawls on the ground her shirt rips and then her pants rip off and before you know it she is half naked and gets stabbed through the chest. 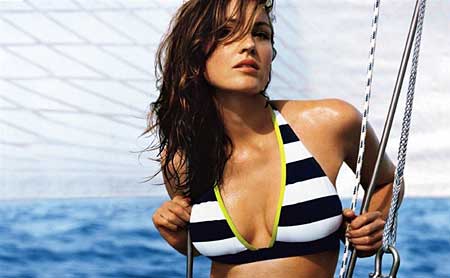 2. The Redneck – This guy is 3rd in line for the most muscular. He is average looking and has a thick southern accent. He is always the one with the guns, which is why he almost makes it through the end of the film. The Redneck is the one character that you have been cheering for the entire time. He is sweet, kind and always helps other people. He will definitely have a pickup truck, usually with a confederate flag on the back. The Rednecks death is always spectacular. It will be a shoot out style between the Villain and the Redneck. The Redneck will use every gun he has to try and kill the Villain, but ultimately, he fails and will die in or around his prized truck. 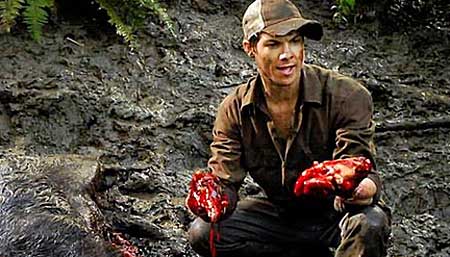 1. The loner- This person is always average looking, a guy or girl and is dressed differently than the rest of the cast. The loner has been pushed away by everyone and is always sneaking around. This person can be very cynical. Whenever the loner says anything or has a good idea, the rest of the cast ignores him or her. This character is also the only one to survive. This is usually because they have teamed up with the Villain, and, in a quick montage at the end of the film, the viewer is shown that the loner has actually had a hand in killing everyone, adding the twist to the film. The loner will typically be the only one to survive and will almost always make an appearance in sequels to come.

If you have any stereotypes that didn’t make my list that you think should have, then leave your ideas in the comments below!