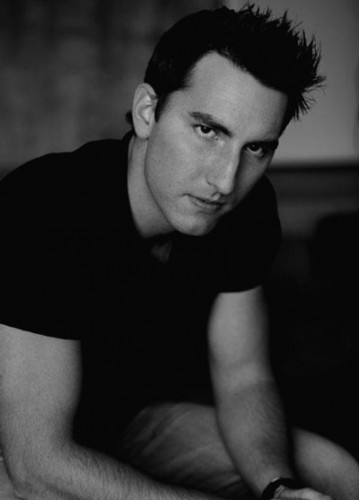 What’s up my 1000’s of beautiful people stopping by to read this interview and even to the 3 ugly ones in the back there!
No not you, that one way back there! Ben Schmitt has dropped by HorrorNews.net to give us a piece of his mind, movies, and life. I sat down and asked him some questions and being the true professional he is, he answered them all with honesty and held nothing back!
So sit back, relax, and read on I talk with Ben Schmitt:

Thank you so much for talking with us today!

No problem; it’s my pleasure.

How are things going with you?

Great! I have some very exciting stuff coming up for me.

You were born in New Orleans LA, grew up in Chicago IL, stayed a quick stint in Los Angeles, and now reside in Hollywood. Did I get all of that correct?

That’s a lot of moving around! haha, What brought you to where you are now?

I was raised by gypsies (laughter). I’m actually happy that I experienced moving frequently while younger because it exposes a kid to all of the subcultures within the United States and definitely makes childhood interesting, and who doesn’t want that.

Who are your major influences in acting and in life and why?

In life, definitely my Dad and Mom. My Dad for his unwavering work ethic and my Mom for always teaching me. The way to live is one hand up and one hand down, always reaching up and working towards your goals, but at the same time always reaching down and helping others in their endeavors as well. In acting I would have to say Sean Penn, Christian Bale and Edward Norton. Their dedication to each role they respectively take on and the responsibility that they shoulder as an actor that respects the story and are dedicated to bringing that story to life in a truthful and full manner is unparalleled. The discipline of being true to your character and fulfilling the writer’s vision for their story no matter what is very exciting to me. These actors epitomize that for me.

Acting coach Howard Fine once told you that you have ‘Sean Penn in you’ and a fan commented that you reminded them of Christian Bale. These are pretty big names to live up to! How do you feel about being compaired to the same men you idolise?

It’s an honor and not something that I take lightly. I have tremendous respect for both Sean and Christian as people, as well as their acting ability and would definitely like to work with the both of them in the future.

You have been in quite a few films, the first being QUENCH where you played the character of Jason. Tell us a bit about the film from your perspective and your character.

Well, I was quite lucky to get cast in such a great production as Quench with really no experience but definitely an eagerness to fulfill Zack Parker’s vision. He had faith in me and cast me opposite actors that where quite experienced which was another blessing because the better the actor you’re working with will usually bring you up in your performance. Overall to me Quench is a film about friendship, perceptions of people on the fringe of society and how choices affect everyone around us, the hummingbird’s wings and a hurricane so to speak. I played Jason, a gothic guy who is being torn apart between keeping his new identity and keeping his best friend. We all know what it feels like to have a best friend and time goes by and life changes each other and all of a sudden you don’t have as much in common with your ‘best’ friend anymore. 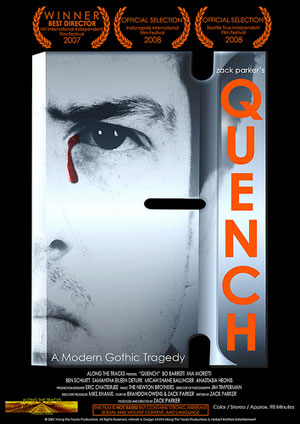 You have said of the Goth scene that although you are not a part of it that ” (The goth scene is) interesting and very misunderstood”. What in your studies brought you to that statement?

It all comes down to perception. When we were filming on location in a small town in Indiana (Richmond) I would go to the local restaurants and shopping plazas ‘in character’ so to speak, and how people treated me was astonishing. I definitely believe it had to do with it being a Mid-western town with very traditional concepts of the gothic culture. If we were filming in New York or here in Los Angeles, people wouldn’t have looked twice (laughter). The issue is that at the end of the day an individual decides they really like black, wears spiky hair and fingernail polish and goes to Wal-Mart and gets the ‘Lane Closed’ sign slammed in their face while trying to buy Cheerios then we have an issue with basic respect within our culture. Treat people with respect and dignity whether they are gothic, handicapped or a preacher; not because you dislike their clothes or accent. I’m on a soap box (laughter).

ONLY FOOLS RUSH IN was one of your latest movies to be released. Tell us a bit about this film and your role in it.

Only Fools Rush In was one of my favorite film experiences. To this point I have never been pushed so emotionally, physically and mentally then while shooting it, and that’s what I liked about it (laughter). It’s a thriller about a young couple, early in their relationship, who head out of town for a weekend getaway and experience a situation that pushes their relationship to the limit.

In SHADES OF GRAY you play an 18 year old boy who runs away with his pregnant girlfriend only to figure out that the problems you had at home weren’t nearly as bad as the new problems you find. What can we expect from this film?

You can expect a drama that will make you think on another level. It’s about how lives interconnect without us realizing it and how the littlest of choices can really alter another’s life. Jake Bilinksi (the Director/Writer) is very specific and I believe he made a film that everything in it from the set to every word in the dialogue means something. It’s definitely a film that can be watched repeatedly, such as Memento, and you’ll notice little aspects of the story that you didn’t notice before.

In your latest film ONLY FOOLS RUSH IN, a dramatic thriller, you play a med grad who goes on a getaway with his girlfriend where some events test your relationship.

You really have a nack for these types of roles don’t ya! Haha But I can say you play them very well!
(Laughter) Maybe, but I can truly say that when I read each of these respective scripts they grabbed me, each of them in a different way, and I wanted to sign on. It’s all about the story. If it’s really worth telling and everyone on board from the crew to the director to your fellow actors has a like-mindedness to tell it well, the possibilities are endless.

Whats next for Ben Schmitt?

It’s in the early stages of pre-production, but it’s a drama about a young police officer, played by me, fresh out of the LAPD academy who is ready to take crime to it’s knees and finds out real life really isn’t that simple. An award-winning writer wrote the script and it’s definitely a story that I’m very excited to be apart of.

Any last words for me and our readers?

Would like to thank everyone for there support. Being able to have a career in acting is a gift.

Thank you for stopping by and giving us a piece!

Absolutely, it’s been a pleasure.

For more of Ben Schmitt you can go to:

Thanks to Ben for talking with us and thank YOU for diving into our worlds! Make sure to check out QUENCH on DVD today! 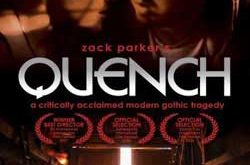