After.Life: Blu-Ray August 3rd – Is there life after death?

Liam Neeson (Taken, Star Wars 1: The Phantom Menace), Christina Ricci (The Addams Family, Penelope), and Justin Long (He’s Just Not That Into You, Drag Me to Hell) star in the psychological thriller After.Life, on DVD and Blu-ray™ on Tuesday, August 3rd from Anchor Bay Entertainment. Directed by Agnieszka Wojtowicz-Vosloo and released theatrically by Anchor Bay Films, After.Life tells the story of a young woman (Ricci) caught between life and death and a funeral director (Neeson) who appears to have the gift of transitioning the dead but might just be intent on burying her alive.

The After.Life DVD and Blu-ray™ bonus features include audio commentary with Co-Writer/Director Agnieszka Wojtowicz-Vosloo, Delving Into The After.Life: The Art of Making a Thriller, and the theatrical trailer. How often do we appreciate something only when we lose it?

“In After.Life, Anna’s (Christina Ricci) quest for love and happiness takes a macabre turn when, after a car accident, she wakes up to find the local funeral director Eliot Deacon (Liam Neeson) preparing her body. He calmly tells her she’s dead. Her funeral is in three days time. As Anna is forced to face her deepest fears and accept her death, her boyfriend Paul (Justin Long) begins to suspect Eliot may not be who he appears to be. Does Eliot truly have the gift to talk to the dead and help them transition to the afterlife? Or is he concealing a more sinister secret?”

With its constant edge of menace, After.Life is a stylish psychological thriller that provocatively blurs the razor thin line between life and death. 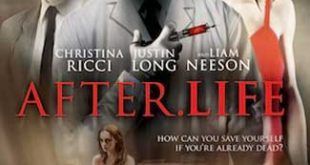