All of those fans that have been following artist and Ginger Stein creator Dennis Willman and Jeff Hughes owner of Comic Book Divas have been reading about the two giving life to Ginger Stein in the pages of “Ginger Stein: Rise Of The Undead” for several months.

Fans of Dennis Willman, Ginger Stein, and Comic Book Divas won’t need to wait much longer, as Dennis Willman and Jeff Hughes will be launching “Ginger Stein: The Darkness Comes” this will be a special eight page comic which is going to not only introduce many of the primary characters in the stand alone issue but will also contain some sketch and artwork.

“Two months after the outbreak of an ancient necromonic disease in Detroit, Michigan, the US Government is longer able to maintain control of contagion. Panic has slowly gripped the unwitting populace.

The politicians are unable to decide an effective course of action. The best doctors and scientists have given their very best, only to meet with failure. The virus is 100% communicable and absolutely lethal, infection meaning the end of life as we know it and the reanimation of the corpse left behind. And it is spreading faster with each passing day.

On the eve of the day that has been predicted to be the end of the world, December 21st 2011, one of the key players in the cover up regarding the living dead is confident he has secured the safety of himself and his mistress from the coming apocalypse. Little does he know that the infected citizens he used to protect have followed him to his remote retreat, and with them they bring the plague to end all plagues.

And following close behind is the one woman who has the ability to save not only his life, but the lives of every living person on Earth.”

The comic will feature for the first time many of the primary cast and characters including:

Also fans of Dennis Willman should also keep in mind that this will be the first paper comic book that the artist has drawn; fans will also note that Dennis Willman is the artist for the Comic Book Diva web comic series “A Life Behind The Mask”, and like the web series reader’s will not be disappointed.

After the SAC Horror Convention the “Ginger Stein: The Darkness Comes” will be available at Comixpress with the regular cover; this edition will also be very limited.

Not enough “Ginger” news for you? then stay tuned for the big announcement coming soon about the “Ginger Stein: Rise Of The Undead” #1 debut…but that news is for another time very soon! 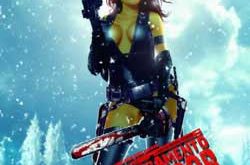