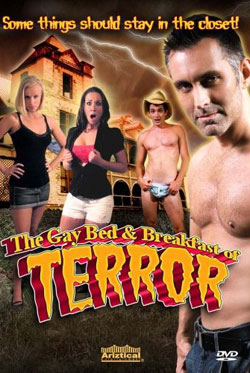 Forgetting to make advance hotel reservations for the party event of the year is a deadly mistake for five gay couples who are forced to stay at the Sahara Salvation Inn bed-and-breakfast — the only place in town with any vacancies. The out-of-the-way establishment is run by a God-fearing mother-and-daughter duo (Mari Marks and Georgia Jean) who appear to be relatively normal. But the truth is, they’re anything but

Oh my god people! Ok, let me take you through my journey through the Gay Bed and Breakfast of Terror. This movie had me shocked, laughing hysterically, and dumbfounded, sometimes all three at once. It was like 1 part p*rn, 1 part horror film, 1 part comedy, 1 part political and religious statements, then take all that and throw it into a class on John Waters films and you have this movie. I could almost see Ricky Lake jumping around in her c**kroach dress screaming ‘Yay for Gay’! hahaha

The story goes, a few unlucky gay couples go to a bed and breakfast set out in the sticks. They are greeted by the B&B owner and her oddly looking daughter. As they gather around the lobby, glances are exchanged between a few of the guys who had shown up with their respective boyfriends. They all go up to their rooms to prepare for a night out to the Blue Party. Soon, couples start separating for different reasons and some don’t come back.

If you really watch this movie you will see what it’s really about. It’s not about a simple bed and breakfast where people get killed, the reasons behind these murders are pretty much stated. Christians, Republicans, and the Bible are spoofed in this movie like a lot of movies spoof homosexuals. 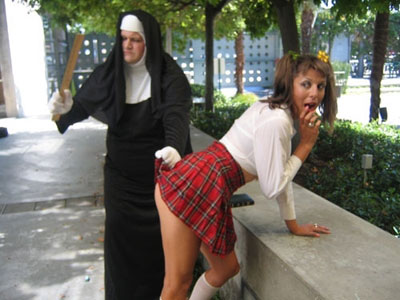 I thought this film was brilliant. Now if you are offended by men on men sex, naked chicks, downgrading government or religion, or drag queens, this is not your bag.

But the blood and gore along with the progressive comedic storyline made this film what I think will be a instant gay cult classic.
I’m straight and I loved it, it overloaded my brain a bit, but I will probably watch it again soon. It’s that worth it.