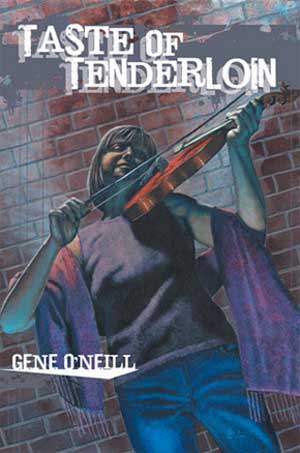 “The ‘Loin was without a doubt the armpit of the city. Because of the full moon, he knew that every panhandler, homeless person, hooker, junkie, and crazy would be hyped up and crowding the street…”

Anyone that lives in San Francisco knows the Tenderloin district. Heck, there’s someplace like it in every major city. It’s one of those neighborhoods, the kind that the God-fearing and wealthy avoid like the plaque and outsiders drive through with all of the windows rolled up, double-checking the locks. A place of desperate and short life, where existence is always sliding half-way down the razor. It’s also one of those neighborhoods that people of an artistic bent tend to adore, at least in theory and it is easy to see why. We tend to gravitate toward extremity as a people and, mostly to those who don’t have to live it, the extreme nature of life in the run-down, filthy quarters holds an element of the Romantic.

With Taste of Tenderloin, Gene O’Neill aims to give us glimpse of life among the lost, these desperate lives of fury and hopelessness and he is, overall, quite successful. We are given eight stories that burn with life, love, loss, pain, insanity and even occasional pin-pricks of hope. All through the eyes of those who experience it in their attempts to survive another day in the ‘Loin.

Both “Lost Patrol” and “Balance” focus on the war that never ends for those so easily tossed aside after fulfilling their usefulness as tools of destruction in far off lands. “Tombstones in His Eyes” chronicles the paths of addiction and slavery to the dragon that haunts the souls of too many. “Bushido”, “Bruised Soul”, “The Apotheosis of Nathan McKee” and “5150” take very different approaches to attempts at salvation, both failed and successful. Then there is “Magic Words”, a tale that possesses its own form of magic.

Yep, you guessed it: this is another installment of the “How the hell can you call this horror” show. Step on up, bucky, an’ I’ll ‘splain it to ya. While not remotely of the monster-in-the-closet or even the evil-that-men-do varieties of horror and there isn’t much of the gloopy-droopy icky sticky insides on the outsides, there is plenty of freaky stuff going on here. I’m pretty sure that this is where I am supposed to ramble on about the horror of everyday life under these circumstances, but I won’t because we’ve all heard it before. Nope, all I’ll tell you is to look at those nifty-fifties glories that were the Twilight Zone under Serling.

The Serling comparison is not only apparent superficially, in the twisted irony at the heart of some of the most obvious cases (“Balance” definitely comes to mind, showing exactly why it was nominated for a Stoker), but lies in more esoteric regions as well. O’Neil is a man who seems to understand the value of both the gorgeous and the hideous, finding the ugliness the lies beneath the one and the beauty in the other. He is also someone with a well developed sense of balance between the intellectual and emotional roots of his writing. Few since the big S have this kind of talent at seamlessly working large themes into a story that both moves and excites the reader. Best of all, he does this with a plain-spoken, straight-forward manner.

So take a trip down the “wrong” streets. Roll down your window. Step out of your car. Breathe in the reek of fear-sweat and decay. While you’re there, say hello to Double-S for me.