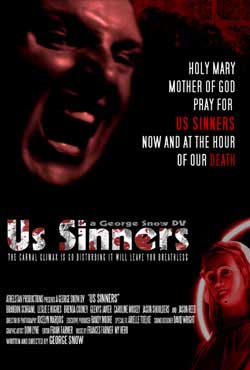 A grown man living with his over-religious mother struggles to grasp the ability to function as a man and avoid his mothers grasp. When a female coworker tempts him but ultimately lets him down, hell hath no fury like a psycho scorned.

The story opens with our subject Tom Connelly sleeping. A twisted little soul as it would seem is narrating a bit while an unidentified woman gives an unidentified man head. Cut to a few scenes where you can hear a woman yelling at someone as the camera is set on a toy dog. She asks what he has on his fingers, tastes it, calls it the devils nectar, and you see a child’s pair of underwear drop and hear slaps. Cut to another scene where someone’s getting head but this time it’s Tom. You hear him praying as the girl goes to town but the end result isn’t as favorable for this ‘c**k sucker’ as the last! haha Vile yes I know, but when does one have the opportunity to use such language and have it be exactly correct?! Ok, getting back.

He gets home and you hear mom forcing herself into his room. After an argument, some insight to this screwed up family comes into light as she bends him over her knee and spanks him like a naughty bitch. Next day, he goes off to work where his coworkers lack of respect for him shows. This is when you start to realize he is just a tad bit slow. Well besides the still allowing himself to get spanked. Gossiping coworkers are having a conversation and when he tries to interrupt for work purposes, his nick name ‘weird Tim’ is introduced. He almost seems childlike.

He gets called into the office and this is where we meet Louise. A meek little woman but who seems to be almost as strange as Tim. And yes, Tim gets enamored. Louise is safe from his perverted obsession at this point. He takes out his ‘manly needs’ on a different woman and then it cuts scene to him cleaning blood out of his trunk.

Now we meet Bobby. he is outside with Tim as Tim performs a little ‘spring cleaning’. He lets off a firecracker and Tim’s mom immediately flies out to reprehend the child for having such things. Tim and Bobby really seem to have at least a friendship but Tim’s mom scares him off. Tim goes in for dinner with his mother. She tells him a story about the little boys father and what a apparent piece of sh*t he is. Then she goes into a story of the horrors of fireworks. (Yes, there is a point to this part of the review but get your ass out there and pick it up to see what) Ok. Now cut to mom groaning. Camera spans down her leg to reveal Tim giving her a foot massage. EWWW, I don’t love my mama that much to massage her broke down ass feet as she moans like the big O is eminent. But, that’s why I’m not Tim! Giving mama this foot massage makes him very angry. So he goes out to find another ‘toy’ to play with. Ok, here is a squirm alert on this scene. Guess who never made it to the market. Watch the film and you will get the joke.

From this point on, the film gets even more dark and disturbing. So I will leave it here and get into my opinion. I have scanned around after seeing this film and read what other people thought here and there. Some people really liked it and others really hated it. Apparently I am the first girl to do a review on this film. And I have to say it’s my pleasure. This movie is %$%*@ up!! And when say %$%*@ up, it is in the best possible way. I am a horror fan. A TRUE horror fan. I realize that the horror genre is not limited to gore and shock and creepy shadow shots. It is about all things that give you that wonderfully grotesque feeling inside. There are a few things that I thought were pointless or just not very well explained. One part that I felt didn’t fit into the movie was a scene when he cuts open a victims chest and it reveals a face. Now I get the meaning behind it, but it was just very misplaced especially with no explanations or hints that were clear.

I also thought the scene of his boss behind the closed door with who, by guess, was an assistant of some sort got a little hoakie due to the over pronunciated NY stereotypical secretary voice. A lot of this film felt natural so that threw me off.

But this brings me into, great casting job! The actor who played Tim, played the sh*t out of that role. He hit spots perfectly and the two personalities that he had to nail were completely separate and you know when he was who so to speak. I wanted to give his pasty redhead self a hug during some of these parts.

Louise did a great job as well. If you take out the whole crazy hooker killer aspect, these two would have been cute together. George Snow directed and wrote this film which took about two years to shoot.

Dude George, what the hell is going on in your head? Great film but I would hide my pantie liners if I was your wife! (Watch the film and you will understand that one also) The character development was very apparent in the film. Mom was a crazy bitch too! Overall, this movie IS NOT for everyone. Us Sinners is a great movie for a twisted mind. And it just so happens that this girl owns one of those!