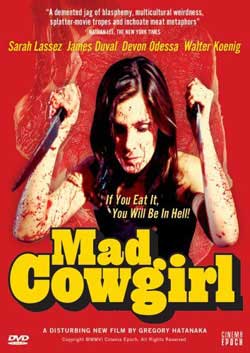 Director Gregory Hatanaka’s twisted thriller stars Sarah Lassez as Therese, a health inspector whose progressively delusional psyche leads her on a surreal — and bloody — odyssey. To cope with her marital split, Therese takes up with a slimy televangelist (Walter Koenig), indulges her appetites for sex and beef, and obsesses over a kung fu TV show. Meanwhile, her meat packer brother (James Duval) may have infected her with mad cow disease.

Wow wow wow. This is going to be a tougher film to review. Reason being is I’m not one who likes to talk bad about anyone’s artwork. This film is a challenge for me.

The film starts out with footage of the news casts that are talking about the “Mad Cow” outbreak and has flashes of an evangelical preacher giving a sermon. Later in the film we find that our main character has a relationship with the preacher that is almost obsessive. She seems to be the ”lonely girl lost in the world of temptation” type. The film follows her as she deals with being a scorned lover, her obsession with beef, failed relationships, ailing mother, failing health, and her unnatural relationship with her brother.
The films basis is almost confusing.

Of course you would think it would be about someone getting “Mad Cow Disease” since one of the first scenes shown is of news footage talking about the outbreak in the 90’s. But the plot gets confusing as it’s found that she has a tumor. If I’ve missed something, then I must apologize but I honestly don’t see where the Mad Cow disease is mentioned except for a small part during a semi-climatic scene where she finds out that she had consumed tainted meat. This seems to be a problem with a lot of films that I’ve watched lately. The story isn’t developed enough to flow in an easy and understand manner. And another problem I had with it was there was just too much going on.

There were so many subplots trying to be explained that it became like a melting pot of jumbled jarble. For instance, we have her love life. It is explained that she is divorced and carried an affinity for the evangelical preacher. He decides that he doesn’t want her any longer and she goes through a decent into obsession and then starts to sleep around. But with flash backs, forwards, and some present scenes, you’re not sure of when these relationships are taking place.

Then at one point she actually has a relationship with her brother. Nasty. I mean come on. This seems to be one of their many crutches in the film. You know, like when a filmmaker doesn’t feel the script is delivering for one reason or another so they add in mass amounts of drug use or nudity. I think they realized at some point that this really was not a horror film so they pressed the panic button and had the main character start boinking her brother so you walked away disturbed. But a fatal flaw in a sense with that particular plotline was that they had their siblings in a strange kind of “in love” relationship, so you aren’t as shocked and disturbed as you feel sorry for these two very misguided sick souls. But I think we’ve gotten into enough of the problem I had with the storyline. So let’s move on.

Here we come to the performances. I must say the performances were pretty decent. Not anything that would cause me to say, “These people were horrible. The table was the best actor in the entire film”. There was a little TVs. show that was sporadically shown throughout the film that was the main’s favorite program that is intentionally hoakie. It was pretty annoying but I’m sure that it was also intended to be.

I can’t really say this was a horror film at all. Other than the last 20 minutes of it, it doesn’t fit the criteria of a horror film. I don’t know if the mark was missed or if they figured it was a good way to get a film out quickly under a genre. Blood and some killing don’t make a horror film. It’s about time people started to understand this fact. The effects are minimal so a great thesis about them isn’t at all necessary. Its mostly just people covered in blood.

I really just didn’t see the point in this film. It seemed almost like a forced film (hey, I wanna be famous, so I’m gonna make a movie and get my name out there). I wouldn’t even give it the credit of a thesis film. This is one film that’s just better packed away and left alone.