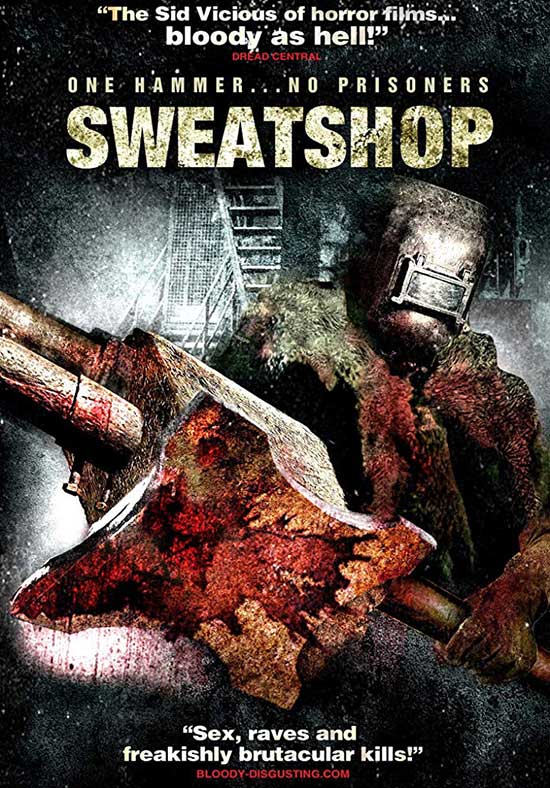 Charlie and her friends break into an abandoned warehouse and begin setting up an impromptu party. Unbeknownst to them, something lurks in this dark place… a presence so horrific, so monstrous, it has no name. Fueled by uncontrollable, unprovoked rage, this Beast knows only one thing – Charlie and her companions chose the wrong building, and they’re about to pay for it.

Have you ever been to a rave? Well I have and this film sure brings back those memories!

Ahhh, the days of brightly colored hair and clothes that can blind the masses as you walk down a sunny drive. I used to have a pair of jeans that flared out at the bottom and were neon green. I also used to roll my hair on either side of my head in the “panda bear” ear style and wear my eye liner half way to my temple with glitter and various colored eye shadow to accent my outrageous makeup job. Hahaha the Candy Raver Days! 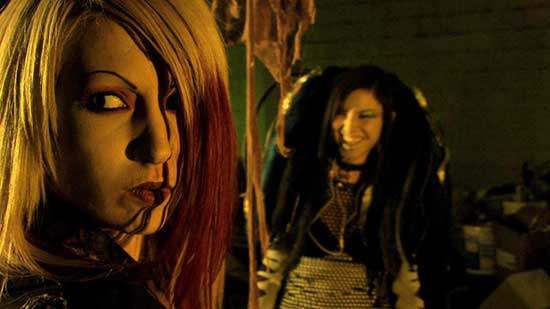 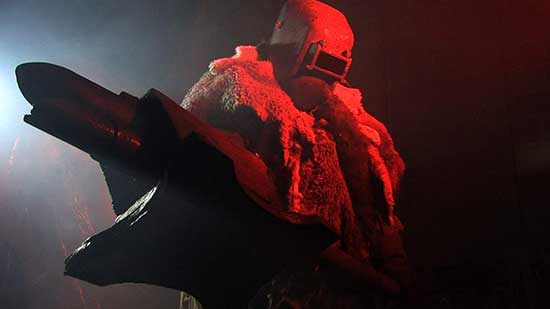 Why am I telling you all this? Well SWEATSHOP is about a bunch of adults who break into a seemingly abandoned building to throw a rave. (Now you get it right?!) But this place is not abandoned by all forms of life. Its inhabitants have a different agenda for this group, and it doesn’t involve the party they are looking for.

Let me tell you guys how I reacted while watching this film. The best way to sum in up is “Hell yes!!!!!”!

I can honestly say this film had some of the best kill scenes of any move to date. This is attributed to Marcus Koch (who is one of the best effects people coming up in the industry) and Kristi Boul (who is a new comer to the industry and is going to be one hell of a talent to recon with!). The effects and make-up in this film are absolutely amazing, honestly I can’t say enough about them! 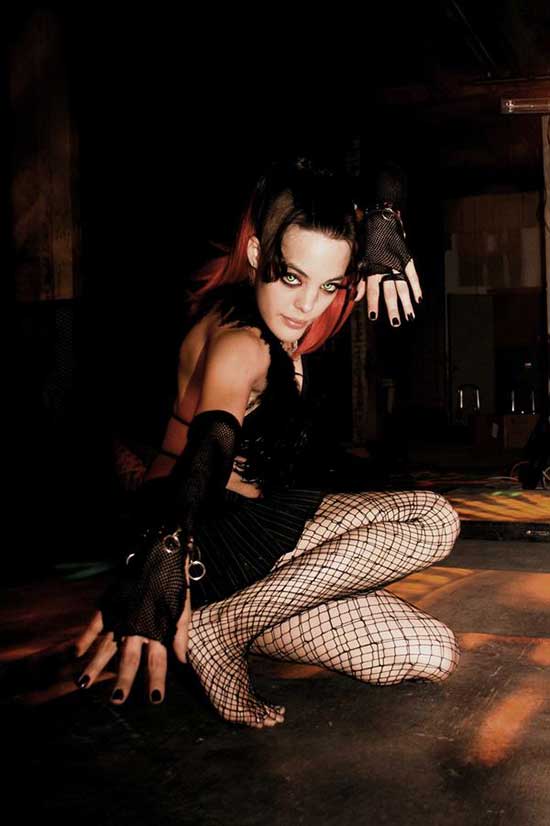 I also want to keep an eye out for Kristi. As one of the few females in the special effects department, she has already put many to shame. And I have always been impressed with Marcus so I can assure you, his fans will NOT be disappointed.

Ted Geoghegan and Stacy Davidson wrote SWEATSHOP with Ted producing and Stacy directing. This film was exceptional with its visual appeal as well as its scene planning. And I have to say there are more references to oral sex in this film than I have seen in any film do date. Nice job guys! Hahaha!

This film had some very comedic moments that were skillfully placed but never overdone to the point where it turned into a comedy. It also had its very suspenseful points that drew you into the punch before you knew what was coming. 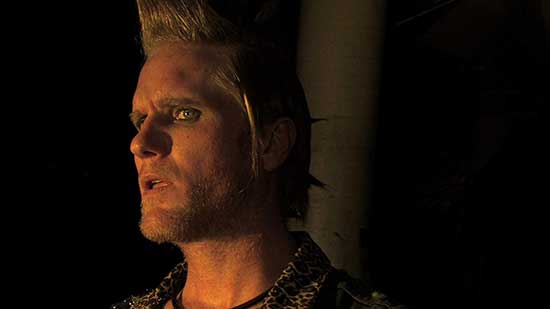 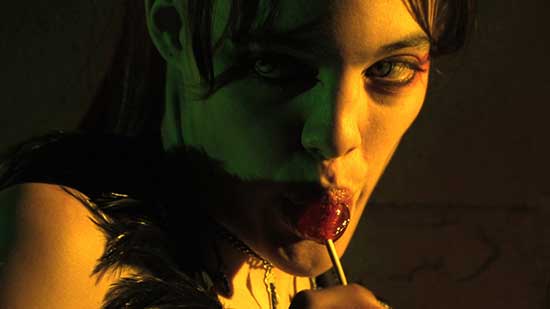 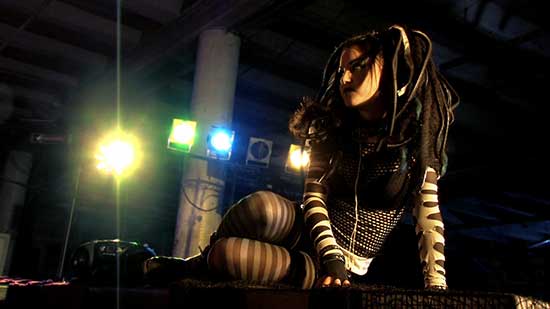 I have to give massive horns to the guys for the script and the kill scenes. These alone will make this a fan favorite.

There were a few minor dislikes of mine with this film. I could have hoped for a little more background on “”The Beast” (played by Jeremy Sumrall), who I think is one of the best original horror characters to come out of horror in some time and a bit more about his “harem” of women. The girls were masterfully done and I would have liked to know a bit more about that dynamic. So I will hold out hope for a prequel, which when you see this guy, you will want to see more of him too!

A few of the scenes got a little daunting with the draw out of anticipation. I think a few of them could have been brought to climax a lot quicker as not to lose the pre-kill anxiety but these were few and far between. They did an awesome job of keeping you sucked in with the film in general. 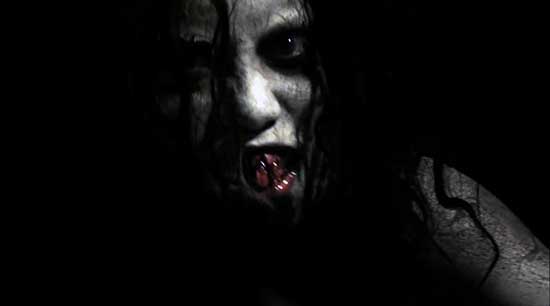 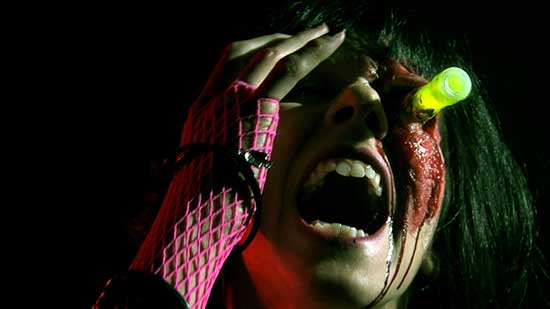 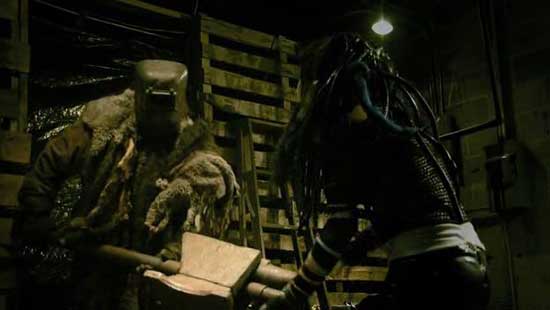 The characters were so much fun! I really enjoyed the dynamic of the differences that encompasses this group but the similar characteristics that drew them together.

There is a lot of humor, terror, suspense , and incredible kills in this film that make it one of the films I can tell you to get your asses in gear and watch this film!

As one of the best Indie films to come out in some time, I definitely recommend it as a must see!