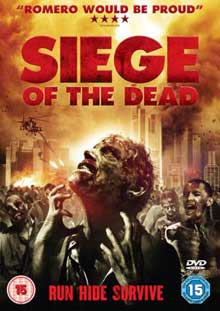 In Siege of the Dead, Michael arrives in Berlin to return a set of keys to his ex-girlfriend, Gabi, as an excuse to see her again, he finds her apartment empty save for a couple of plumbers making repairs to the central heating. Just as Michael learns from the plumber’s apprentice, Harper, that Gabi has popped out for a while but will return soon, the apprentice is attacked by his boss who has unexpectedly and inexplicably transformed into a raging madman. Together, Michael and Harper manage to bundle the crazed plumber out of the apartment and barricade themselves safely inside. Within minutes, they find themselves trapped in apartment block under siege from a horde of similarly insane people, apparently hungry for human flesh.

The radio news reports of a deadly virus spreading throughout Berlin, transmitted by body fluids via bites and bleeding wounds. The result is a city overrun by bloodthirsty zombies. Surrounded by the undead, Michael and Harper have to figure out how to stay alive long enough to get out of the building safely and, if Michael has anything to do with it, find Gabi along the way.