Home | Articles special | Cockneys vs Zombies- Was This an Underrated Film?

Cockneys vs Zombies- Was This an Underrated Film?

Zombie films can fall into many categories. There can be zombie films made with a serious tone about how the world has crumbled or a thriller tone much like the Walking Dead or they can fall into the comedic tone. Cockneys vs Zombies certainly falls into that category and does it brilliantly.

The East End of London is the last place you would expect a zombie outbreak but in this film, it is the setting of more than just trying to kill zombies it has several stories going on within the main zombie apocalypse story. 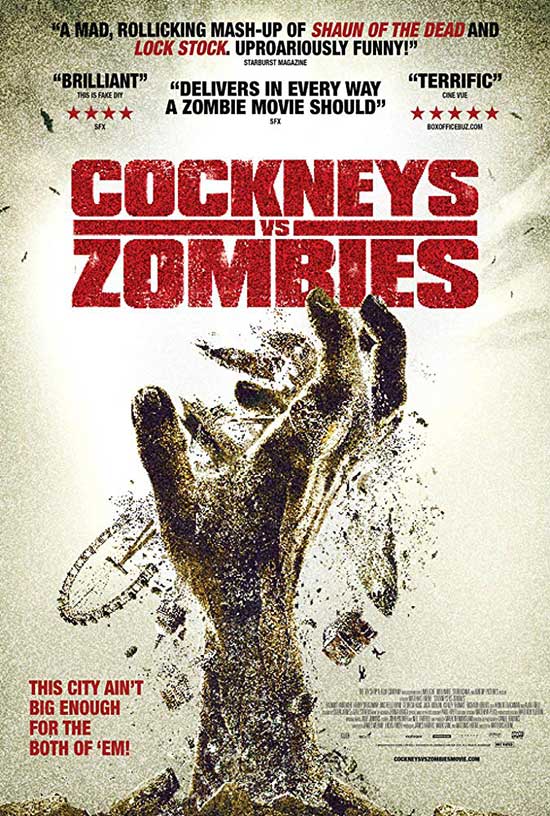 How did the infection start

In a great way of starting a zombie apocalypse, it is actually two builders who discover a 17th-century catacomb, sealed by the order of Charles II. They enter to search for treasure and are bitten by zombies.

What a superb start to any film.

The film then follows the plot that two grandsons want to save their grandfather’s retirement home so they hatch a plan for a bank robbery. The plan goes wrong but they pocket £2.5 million, however, when they escape they realise that the zombie outbreak has occurred.

One thing that was perfectly done in this film was the cast. Using authentic cockney actors as the main characters was an inspired choice. Unlike Charlie Hunnam in Green Street or Dick Van Dyke in Mary Poppins hamfisting their way through a cockney accent, the lead actors were from southern England.

When you have Michelle Ryan who was famous for her role on Eastenders, Honor Blackman who played a Bond Girl, and the amazing Alan Ford who is best known for his gangster roles in Snatch and Lock, Stock, and Two Smoking Barrels.

Ford really did steal the show and he was perfectly cast. The director Matthias Hoene and writer James Moran stated “Whoever this person is, he needed to symbolise what a cockney is -he needed to be as cockney as you can be.” When Ford looked over the script he believed it was written for him!

Even Ford who had played gangster roles before joined in with the rest of the actors and played the silliness well. They did not take themselves too seriously and as always Tony Gardner was a fantastic part of that with his goofy English ways.

There are some fantastic zombie moments of people getting bitten especially in the old people’s home and Ford is punching them in a classic Cockney manner!

However, nothing will top Ford shooting zombies from a boat upon the River Thames as they gang make their escape from the infestation.

The gore itself is similar to that of Shaun of the Dead which took the British public’s heart in 2004.

The downfall of the film was the fact that it was not Shaun of the Dead and not as mainstream for people to see. The cockney element was fantastic but perhaps some more West Ham United references were needed with fans perhaps getting infested as they walked to Upton Park looking at the best betting apps but then getting bitten by a London tube worker zombie!

The scores on IMDB and Rotten Tomatoes suggest to the person scrolling through Netflix or Amazon prime that it is worth a go but realistically it is a cult classic in the zombie horror comedy genre.