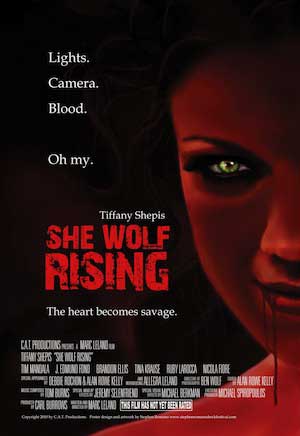 The premiere of “She Wolf Rising” will bridge the North and South. Marc Leland’s indie film, She Wolf Rising is a comedic horror throwback to a Fright Night style 80’s classic. It’s a wild ride that explores the dark side of underground filmmaking, and it stars reining scream queen, Tiffany Shepis (Night of the Demons, Nightmare Man). If you’re above the Mason Dixon Line on October 8th, you’ll be able to catch this film with one of its co-stars, iconic legend, Debbie Rochon. She & the film can be seen at the Eeire Horror Film Festival, Eerie Pa. www.eeriehorrorfilmfestival.com.

She Wolf Rising is a supernatural nonstop thriller that explores the dark side of underground filmmaking. Gina Sklar, the reigning queen of horror, portrayed by Tiffany Shepis, lures Jake Bubar (Tim Mandala) into the decadent world of illusions and myths. Robert Lonzo (J. Edmund Fond) is Gina’s mentor and producer in the world of horror cinema. Someone has stolen the footage from his latest movie and Gina needs Jake’s help to recover it. This is Lonzo’s best movie ever and Gina’s breakout performance. Gina believes that this movie could catapult her out of the “B” world of films and into mainstream cinema. Jake struggles with his own demons internally but in the end cannot resist her. He only sees her vulnerability and beauty and will do anything to help. Jake’s beliefs are challenged when he discovers Gina’s true nature and realizes that the “the heart becomes savage.”  Together they forge ahead and deal with the demons and beasts that try to stop them from their forbidden desire.

If you’re below the Mason Dixon Line on October 9th, you can catch a midnight screening at the Orlando Freakshow, in Orlando Florida. www.freakshowfilmfest.com