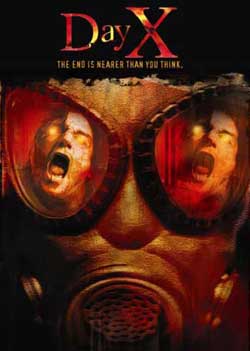 When a mysterious epidemic sweeps through the population, it turns its victims into homicidal cannibals in this indie chiller helmed by Jason Hack. A few uninfected citizens escape the carnage by hiding in a deserted steel mill, hoping to survive. But only one of them, government bureaucrat Frank Chambers (Ken Edwards) — who’s protecting a catatonic girl — may be able to find the key to stopping the pandemic before they all end up dead.

A blond medical worker named Sasha answers the ringing phone and is given orders from her superior. She slowly gets up and travels down the hall. A loud buzzing alarm goes off and next thing you know she is biting her co-worker. In your head you think what the hell? Why did that just happen? Soon a man named Chambers is fighting his way out of what I think was like a parking garage with infested zombies trying to catch him. He looks like he has dealt with this sort of chaotic situation before, either that or he is just a natural born killing machine.

He reaches a vacan’t building and sneaks thru with another man until they come to a closed off back room. They silently burst inside and a handful of people are hiding within it’s walls. Conversations and bickering ensue since no one really trusts anyone else. I mean hey, they just all met each other who knows what the other person might be capable of doing. Would they throw someone under the bus just to make it out of this alive? A pastor nervously wonders what the hell is going on and then there’s Caleb and his girlfriend Patricia who you can see is just completely terrified.

A bitchy blond Helen bickers with Chambers with the whole kind of- who died and made you boss attitude and manages to get on your nerves. After a quick pow wow and informal introductions a plan is beginning to hatch. Jason who just was trying to squat in the building for the night, Douglas, and Cort all agree with Chambers that they need to move from this tiny room and go to the middle of the building. I am about up to my limit with zombie movies and will honestly say that there was entirely to much talking and planning in this film and not enough zombies. 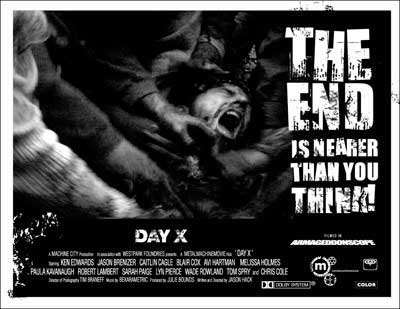 Plus zombies these days in film aren’t your average twitching brainless feeders, in here they were smiling and running around- that bothered me a little. Night of the Living Dead really introduced me to zombies and the likes of Return of the Living Dead which I might add is my favorite zombie movie out of them all upgraded them a little to thinking dead things. The smiling blond zombie in here who seemed like she was smirking at them put me off some. Special effects are a minimum but I have seen far worse. Someone out there might like to add this to their zombie collection while others just might end up disappointed.

When they all get to the middle Chambers decides to clue them in on what is really going on. It seems that a biological weapon named Series 14 was released but he is unsure of what the exact strain is and there are about 300 zombies out there waiting for them. Now every one in seven people are naturally immune to it and that’s the only reason that the group of them is not out there wreaking havoc with the rest of the infected people. Series 14 causes eratic symptoms and turns the brain into jelly, well all of it except the strong will to survive.

The girl that he has been carrying turns out to be the antidote and he tells them they need to reach Bunker 46 safely. Will any of these people make it to the very end? Who will be the sorry ones who manage to get bitten and turned into a raving zombie? The agent is toxic in the bloodstream like a venom and that’s how the others are transformed into the walking dead, or in the case I guess you could say running and skipping. Will this whole situation be fixed or will it get totally out of hand and spread to other places and states?

Day X just didn’t do it for me for the reasons that were mentioned in the above paragraphs. When you watch so many horror movies and the majority of them are about zombies maybe you tend to expect a little more? Or maybe you just want some of them to be slightly different than the rest.