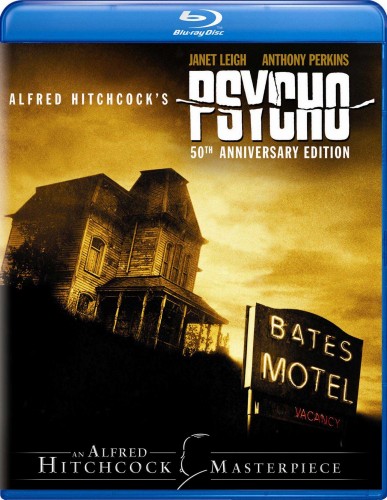 Universal City, California, May 10, 2010 – Hailed as one of the most influential suspense movies of its time, Alfred Hitchcock’s Psycho had a profound effect on how future filmmakers made movies and shaped audience expectations for generations to come. To commemorate the 50th Anniversary of one of Universal Studios’ most treasured and prestigious films, Psycho will debut for the first time ever on Blu-rayTM on October 19, 2010. Fans can now enjoy a superior quality, hi-def experience when viewing this re-mastered classic. Psycho will also be honored during its landmark anniversary by the esteemed 2010 Festival De Cannes. Chosen as a Cannes Classic Selection, the film will be recognized as a restored masterwork from the past.

Meticulously restored for perfect digital picture and the purest DTS HD 5.1 digital sound, the Psycho 50th Anniversary Edition takes audiences on a thrilling journey as an unsuspecting victim (Janet Leigh, The Manchurian Candidate, Bye Bye Birdie) visits the Bates Motel and falls prey to one of the silver screen’s most notorious psychopaths – Norman Bates (Anthony Perkins, Murder on the Orient Express, Les Miserables). Featuring one of the most iconic scenes in film history – the infamous “shower scene” – Psycho continues to terrify audiences today as much as it did half a century ago.

BluWave’s creative talent gathered the original sound effects from the Studios’ extensive effects library and, using these source materials, created a 5.1 up-mix to bring Psycho’s soundtrack up to the expectations of contemporary audiences while maintaining the original integrity of the filmmaker’s vision.

Psycho’s mono audio track will also be available for viewers who want to experience the film in its original form on its golden anniversary. This cinematic achievement from the Master of Suspense is an essential addition to every movie lover’s library.

Psycho 50th Anniversary Edition on Blu-ray™ unleashes the power of your HDTV and contains extensive bonus features including:

· Psycho Sound: A never-before-seen piece that looks at the re-mastering process required to create a 5.1 mix from the original mono elements using Audionamix technology.
· The Making of Psycho: A feature-length documentary on Hitchcock’s most shocking film.
In the Master’s Shadow – Hitchcock’s Legacy: Some of Hollywood’s top filmmakers discuss Hitchcock’s influence and why his movies continue to thrill audiences.
Hitchcock/Truffaut Interviews: Excerpts from a 1962 audio interview with Alfred Hitchcock.
Audio Commentary: Feature-length audio commentary with Stephen Rebello (Author of “Alfred Hitchcock and the making of Psycho”)
· Newsreel Footage: The Release of Psycho: Vintage newsreel on the unique policy Alfred Hitchcock insisted upon for the release of the film.
The Shower Scene: A look at the impact of music on the infamous “shower scene.”
· The Shower Scene: Storyboards by Saul Bass: Original storyboard design.
· Production Notes: Read an essay on the making of the film.
· The Psycho Archives: See the gallery of on-set photo stills from the film’s production.
· Posters And Psycho Ads: See a gallery of original posters and ads from the theatrical campaign.
Lobby Cards: View a gallery of promotional lobby cards from the film’s theatrical campaign.
Behind-The-Scenes Photographs: View rare photos showing the cast and crew at work.
Theatrical Trailer: Watch the original promotional trailer from the film’s theatrical campaign.
Re-Release Trailers: Watch the promotional trailer created for the re-release of the film.

Synopsis:
Join the Master of Suspense, Alfred Hitchcock, on a chilling journey as an unsuspecting victim visits the Bates Motel and falls prey to one of cinema’s most notorious psychopaths – Norman Bates. Named number one on the AFI’s 100 Years…100 Thrills list, this infamous film has become a cultural phenomenon. Featuring one of the most iconic scenes in film history – the famous “shower scene,” Psycho is “still terrifying after all these years” (Leonard Maltin’s Classic Movie Guide).