Jason Horton’s film Monsters in the Woods stars Glenn Plummer, Kristian Bernard, Annemarie Pazmino, and Lee Perkins. Here a very low-budget film crew treks deep into the wilderness to shoot horror sequences for their unsellable indie-drama. They soon find themselves in the midst of their own horror show as they are hunted down by real monsters. 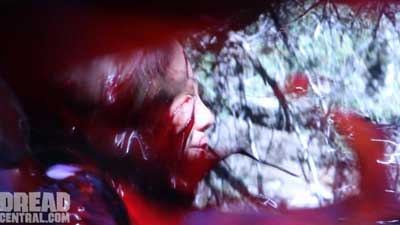 According to Horton, “October 6th is our last major day of shooting. We just got back from a week-long block of shooting in Big Bear. We did more set-ups (and complicated ones at that) than I had ever done in a day. This production has been awesome. It’s the best creative experience I’ve ever had on a set. It’s really neat to see these characters come to life and then die in spectacularly bloody ways. I’ve never seen a cast gel together so well with so little rehearsal time. And our creatures look great! 1313 FX did an amazing job. Dread Central had the following stills to post

Tags Monsters in the Woods