River of Darkness: – Evil is coming to town – new trailer 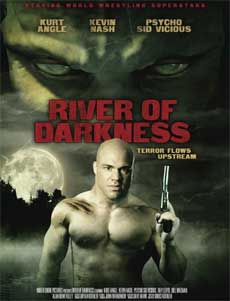 Kurt Angle, Kevin Nashl), “Psycho” Syd Vicious, S. William Hinzman, Bill Laing, Alan Rowe Kelly, Bingo O’Malley, Clayton Hill and Sharon Ceccatti all star in Bruce Koehler’s new creature feature. When unspeakable evil falls on a quiet river town, and Sheriff Logan is thrust into a chilling nightmare of death and mayhem. He is confronted with a series of horrific murders, each more viscous than the last, and soon learns of the community’s seedy past and the evil that has risen from purgatory to exact revenge on the town. When Sheriff Logan discovers that the murders are committed by the spirits of old river squatters, the Jacobs Boys, the town explodes into an battlefield of blazing guns and zombies.

Once The Jacobs Boys exact their punishing vengeance on the town it’s up to Sheriff Logan to unravel the shocking mystery of the past and slam the Boys back to hell.