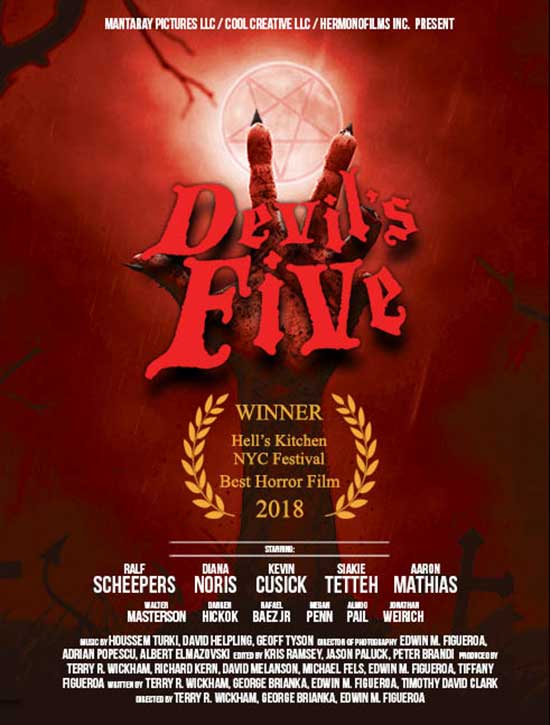 www.eventbrite.com/e/devils-five-west-coast-red-carpet-world-premiere-
tickets-63145250143
Sunday August 4, 2019 – 7pm to 11pm
New York based Award-Winning Filmmaker Terry R. Wickham will be holding the West Coast Red Carpet World Premiere of his Award-winning Best Horror Film Devil’s Five in his hometown of Everett, Washington at the prestigious Historic Everett Theatre.
The Historic Everett Theatre was chosen as the first selection in Washington State’s 6 Coolest Most Beautiful Movie Theaters: seattlerefined.com/lifestyle/washingtons-5-most-beautiful-movie-theaters
Primal Fear Powerhouse Vocalist Ralf Scheepers, Stars in “The Devil’s Five (Wraparound)” segment with Latin Actress/Model Diana Noris, Kevin Cusick. Siakie Tetteh and Aaron Mathias Star in “Abandoned”, while Walter, Masterson and Darren Hickok lead “Don’t Say These Words”, Rafael Baez Jr. and Megan Penn headline “Choke” and Almog Pail and Jonathan Weirich lead “Stash.”
Wickham, who accepted  Best Horror Film Award for Devil’s Five at Hell’s Kitchen
NYC Festival last year, and whose film Washington Road Won 3-Minute Chillers Contestsponsored by Apple, talks about the excitement this opportunity brings, “I can’t believe I’m getting the chance to show my film in the biggest, most heralded theater in the town where I grew up as a boy. I went to Silver Lake Elementary School, Eisenhower Middle School, and Cascade High School for two years all located in Everett. Then my family moved so I transferred over to Snohomish High School for the last two years and graduated from there. I love the Seattle/Everett/Snohomish County area and have a lot of friends and family that still live locally. This honestly is going to be a dream come true for a boy wanting to be filmmaker ever since seeing John Carpenter’s The Thing at Everett Mall Cinemas in the summer of 1982.”
Devil’s Five Synopsis:
Five horrific tales are spun around the theme of the Satan.
The Devil’s Five (aka The Wraparound) / Written & Directed by Terry R. Wickham:
“The Devil unleashes a deadly computer virus hell bent on destroying humanity.”
Abandoned / Written & Directed by Terry R. Wickham
“A photographer does a photo shoot with a sexy video vixen in a deserted location supposedly haunted. Soon after they begin taking pictures they are interrupted by something evil the leads to white-knuckle conclusion.”
Don’t Say These Words / Written & Directed by George Brianka
“Based on the true story of a satanic ritual murder on Long Island, NY in 1984. This coming of age horror/comedy short is about three friends who stumble upon an ancient book that summonses the Devil himself. They try to film the entire ordeal as all hell breaks loose…”
Choke / Written & Directed by Edwin M. Figueroa
“A cuckolded filmmaker betrayed by his business partner and own wife, gets revenge on him by broadcasting his wife having rough sex that starts out with Choking but ends up with demonic possession.”
Stash / Written by Tim Clark / Directed by Terry R. Wickham
“A likable, wholesome young lady volunteers to help raise funds for a struggling church. She does this by going on a scavenger-hunt driven by a Smartphone application, that leads her to
a terrifying climatic discovery.”
Each segment brings their own distinct macabre quality of high-octane suspense and nail-biting terror. DEVIL’S FIVE is true cinematic experience utilizing modern day technology in
ways that are certain to take the audience on a frightening journey they will never forget.
Meet Award-winning Filmmaker Terry R. Wickham & “The Devil’s Five (Wraparound)” beautiful talneted Co-Star Diana Noris on the Red Carpet, have your picture taken with them and ask anything you want about the making of the movie during the Q&A Session that follows the showing of the film.
This will be filmed as a Special Feature for Blu-ray/DVD. So if you ask a question, you will be seen by anyone who buys the Blu-ray/DVD across the world.
$10 Tickets are on sale now:
www.eventbrite.com/e/
Share