Three of the Most Evil Video Games of All Time

Video games cover a lot of genres, from the cute and cuddly to the downright terrifying. Naturally, we are drawn to the games that bring horror and evil to the gaming experience, so here are a few of the very best.

Few games have the ability to make you feel so utterly helpless than Amnesia: The Dark Descent. Originally launched on PC and later released on console, this single-player horror survival game is all about keeping your sanity in a terrifying environment.

Your character, Daniel, edges towards madness if exposed to too much darkness of witnesses too many unsettling events. Your job is to manage his sanity and avoid slipping into a hallucinatory state. Stay in the darkness too long and madness will overcome Daniel. Stay in the light too long and evil monsters will find it easier to attack.

The combination of avoiding too much darkness, being chased by evil monsters and living on the edge of insanity makes for an exhilarating gaming experience.

This title borrows heavily from sci-fi horror classics such as Alien and Event Horizon with a touch of Resident Evil thrown in. Released in 2008, the game follows the exploits of Isaac Clarke, the lone survivor on a stricken spacecraft. Apart from Isaac, all the other passengers on the ship have been mutated into flesh-eating maniacs by a mysterious alien virus.

Ammunition is shorty in supply and danger is never far away in this terrifying space adventure. The game is so atmospheric that every creak, knock and groan keeps you on your toes as you try to complete the levels without falling victim to the terrifying mutants. 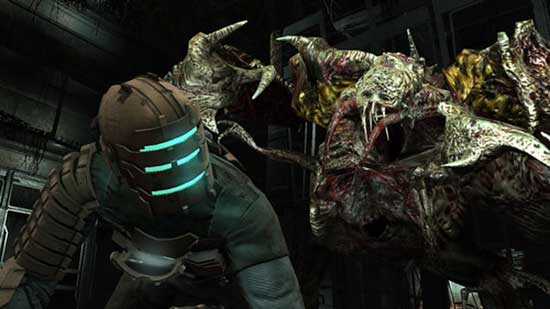 Since its launch, the game has been released on the Android, iOS, PlayStation 3, Xbox 360, Microsoft Windows and Wii platforms.

MMORPG games have become hugely popular and players are not short of options when it comes to horror titles. Requiem: Rise of the Reaver and DayZ are both worthy of mention, but The Secret World is the one that makes our list. This role-playing game was released in 2012 takes place in a real-world setting where forces of evil are at work.

Following an occult terrorist attack, the main character becomes a member of one of three societies that are attempting to control and protect the world. Their aim is to counter the threat of immortal beings across the globe and become the dominant society.

The game uses familiar horror tropes such as zombies, mummies, cults, ghosts and robots and also incorporates many elements of mythology and folklore from around the world. There are missions to complete, monsters to fight, and abilities and equipment to acquire as the player travels the globe in pursuit of their goal of saving the world from evil while pushing the agenda of their own shadowy forces.

Whatever platform you use for gaming, there are some amazing horror titles to keep you amused. And there is nothing quite like being scared out of your skin while trying to perform complex and intricate game movements that could make the difference between life and death.