The Alamo Drafthouse Cinema Westlakes in San Antonio, TX is starting up a revival, of classic horror movies in there original 35m print! They have named the feature “Blood Thirsty Thursday” and it beginnings on August, Friday the 13th!

The first event will feature a triple whammy of Friday The 13th, Friday The 13th part II and Friday the 13th part III in 3-D with vintage red & green 3-D glasses. Future films that have been announced so far are Texas Chainsaw Massacre 2, Creepshow and Motel Hell! Texans, you can now go grab those filmslike they’re bull horns and some are in 3D no less. 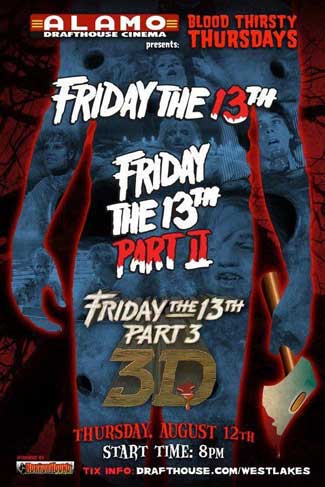