From a recent press release comes the news that The Wagner/Cuban Company’s Magnet Releasing, genre arm of Magnolia Pictures announced today that it has acquired US rights to Takashi Miike’s samurai masterpiece, 13 ASSASSINS. 13 ASSASSINS, which premiered at the Venice Film Festival, recently had its North American premiere at the Toronto International Film Festival, and has just been named as the Closing Night film at this year’s Fantastic Fest in Austin. A gorgeously realized, bravura samurai action film in the tradition of Seven Samurai, 13 ASSASSINS is being hailed as one of the best films of Miike’s prolific career. 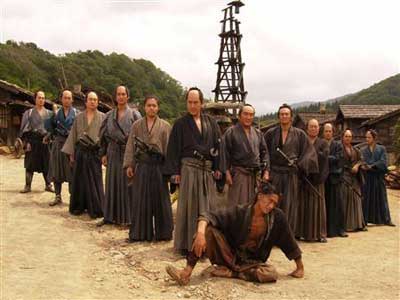 The US deal was negotiated by Magnet SVP Tom Quinn and Hanway Films CEO Tim Haslam. 13 ASSASSINS will be released theatrically by Magnet in the first quarter of 2011.

Story:
The noble samurai Shinzaemon Shimada is secretly commissioned to assassinate the evil Lord Naritsugu after his bloody rise to power. Assembling an elite group of samurai, Shinzaemon plots to ambush the Lord on his annual journey home from Edo. The courageous samurai know it’s a suicide mission because the Lord is closely protected by a deadly entourage led by Shinzaemon’s nemesis, the ruthless Hanbei. To capture Lord Naritsugu, Shinzaemon and his skilled samurai transform a mountain village into an intricate death trap. But when the Lord finally arrives, the assassins discover they are outnumbered fifteen to one. The day has come for our 13 fearless assassins to face death in a monumental battle of fiery explosions, showers of arrows and clashing swords.

’13 Assassins’ to arrive on DVD