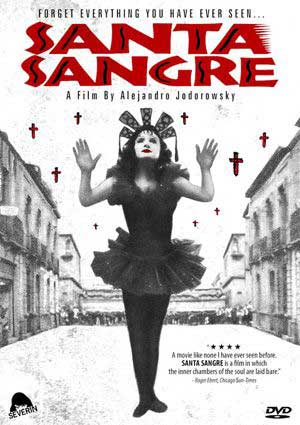 Severin Films is helping Santa Sangre makes it’s jump to American shores in what looks to be an extras packed extravaganza, the movie will be shown in it’s original restored uncut European print.

Santa Sangre will feature more than five hours of extras on the two-DVD and Blu-ray set and the extras include:

The forth coming coverage will be the director’s (Alejandro Jodorowsky) first-ever American retrospective, titled “Blood Into Gold: The Cinematic Alchemy of Alejandro Jodorowsky,” which takes place this Thursday, September 23-Friday, October 8 at New York City’s Museum of Arts and Design.

Synopsis:
A young man is confined in a mental hospital. Through a flashback we see that he was traumatized as a child, when he and his family were circus performers: he saw his father cut off the arms of his mother, a religious fanatic and leader of the heretical church of Santa Sangre (“Holy Blood”), and then commit suicide. Back in the present, he escapes and rejoins his surviving and armless mother. Against his will, he “becomes her arms” and the two undertake a grisly campaign of murder and revenge.”