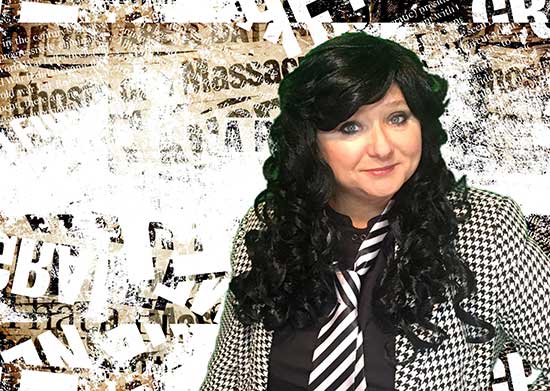 Courtney Mroch started Haunt Jaunts in 2009 as part of her “get off the couch” project while battling Stage 2 Non-Hodgkin’s Lymphoma. What began as a blog where she could share her interest in traveling to haunted places has evolved into a site where other contributors join her in featuring haunted places to travel to, as well as other paranormal, horror, and Halloween news, events, and entertainment. The newest addition to Haunt Jaunts’ lineup is the weekly Haunted Headlines posts and videos, the latter of which is starting to scare up big laughs.

“For years I’ve been sharing links to news stories featuring ghosts and haunted places on Haunt Jaunts’ Facebook page and Twitter feed,” Mroch says. “I usually include little quips when I share them, especially on Haunt Jaunts’ Facebook page. But this year it dawned on me when I was creating outrageous headlines for April Fool’s Day jokes that real headlines about the paranormal are funny on their own –and no one is covering the paranormal from that angle.”

Once that seed was planted, it seemed to germinate immediately.

“The vision sprang to life in my mind. I knew what I wanted to do and what the format would look like, so I set about figuring out how to make that happen.”

Using nothing but her iPhone (which serves as both her video camera and teleprompter), a green screen, and a video editing program, she writes the scripts, pairing her monologues with story-enhancing images that flash on the screen beside her. Pretty impressive for someone with rudimentary video making skills.

“I’d never used a teleprompter before, and I didn’t know how to use a green screen, but I had to figure it out in order to make my vision a reality. Thank goodness for Google and YouTube ‘How To’ videos and the people who share their expertise!”

Her format emulates a normal newscast. She features what she considers “the best of” headlines that she curates in her weekly Haunted Headlines posts. She’s usually able to find a common theme between the stories, which makes it easy to label them with edition names each week.

For instance, The Haunted Real Estate edition featured stories about haunted places for sale that had made the news that week. And the Boo-b Tube edition was dominated by headlines about paranormal TV shows.

She really gets into the act, too. She’s created a Haunted Headlines persona where she dons a wig of flowing, curly black hair and sports a black-and-white houndstooth jacket with a tie.

But sometimes she trades in her “uniform” to match the edition. Like when she “ghosted” herself for the Ghostly Takeover Edition.

“That week the ghosts put ‘the haunted back in the Haunted Headlines’ following a few weeks that were heavy in alien and cryptid stories. I felt I should be appropriately spirited.”

Other times she’s gotten into the spirit has been for the Friday the 13th edition when she wore a “What Would Jason Do” T-shirt, and when she transformed herself into a ringmaster for the Fun & Games edition.

And then there is the WTH Headline segment that she ends with each week. Recent “What the Hellers,” as Mroch calls them, have included “‘Bigfoot erotica’ takes center stage in Virginia congressional race,” and “Counsellor, 30, claims she’s in sexual relationship with ghost — and having his baby.”

The WTH Headlines are not always of a sexual nature, but they’re usually so mind-boggling and outrageous that Mroch herself laughs through them.

And you can’t help but laugh with her. The contrast between her sweet cheerfulness, child-like voice, sly wit, and the spooky subject matter lends to the humor and results in head-shaking, laugh out loud hilarity.

“I don’t know if others are laughing with me or at me, but if people are laughing and enjoying themselves? That’s what matters.”