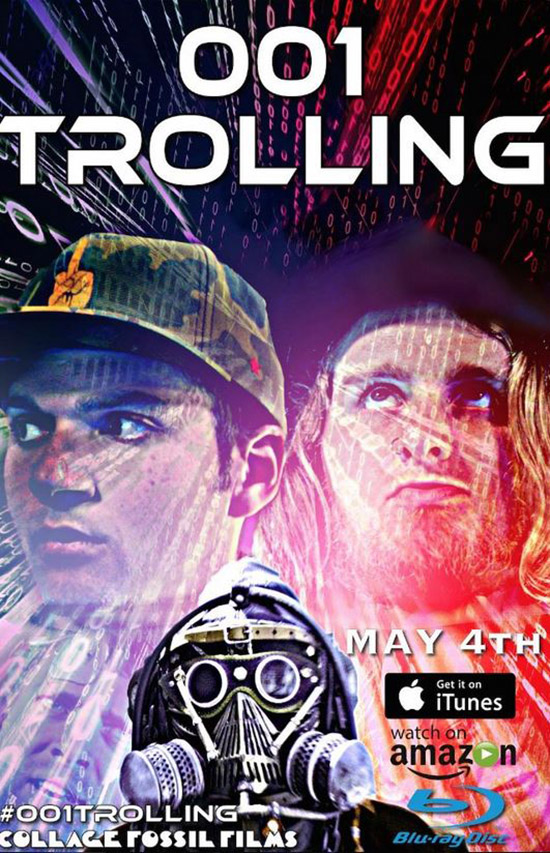 Odyn, a manic security guard impersonates famous rappers in chat rooms to distract from regret, but when he is hacked and scouted by an underground internet troll group, they set out to repair their wounded egos & troll the planet.

After the polarizing endeavor of Struggled Reagans, which also went by the more Sabai company baiting Cosplay Fetish Battle Drones, director Greg Golding launches another grenade into the millennial psyche with 001 Trolling.

Written by Golding, the director plays Odyn, a sniveling security guard with delusions of grandeur. When he and his colleague aren’t shirking their responsibilities, they’re would-be rappers recording their latest creations on their iPhones and lamenting how commercialized the world has become. But that’s not Odyn’s only extra-curricular activities. Odyn likes to ‘troll’; harassing people online and pretending to be an agent to the stars so he can get laid by unsuspecting women. 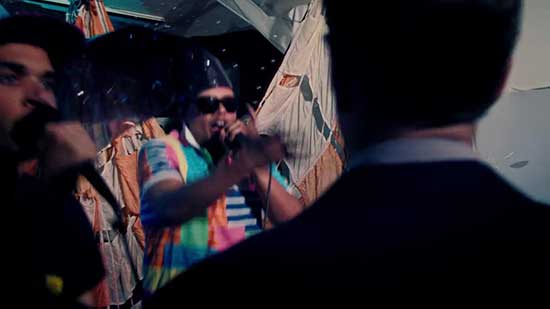 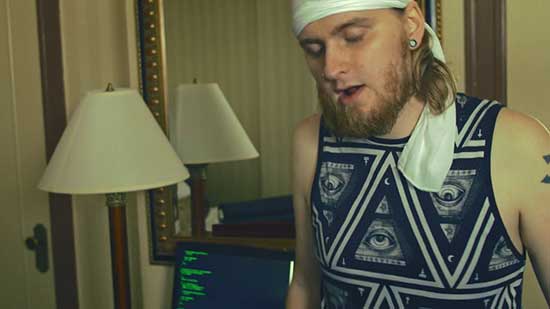 Yes, he is delightful, isn’t he? Although we’re never given any indication of him being anything more than an annoying tick on the internet, his actions catch the attention of Richard Nullman and his band of merry trolls, the Grid Gang. Seeing something special in him, Ricard wants to take Odyn under his wing and help him realize his full potential. He may also be just trying to sleep with him.

On the face of it, 001 Trolling is basically the Anti-Matrix, a twisted version of the Wachowski classic where Neo is a sexual deviant and Morpheus is a petulant steampunk cry baby. And in the efforts of full honesty, I wish it were as simple as that. Golding has a long list of topics he wants to take aim at including mob mentality, sexual assault, racial profiling, law enforcement, abuse of power, pop culture, commercialism and so on. And he wants to do it all in less than 80 minutes. Unsurprisingly, he struggles to do everything at once. 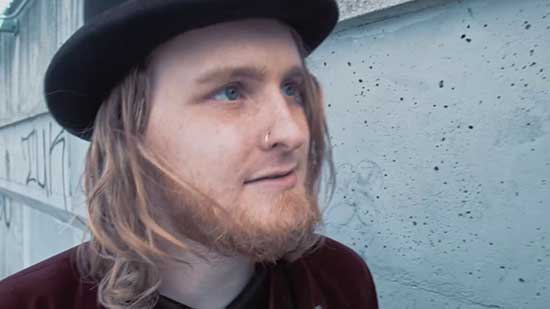 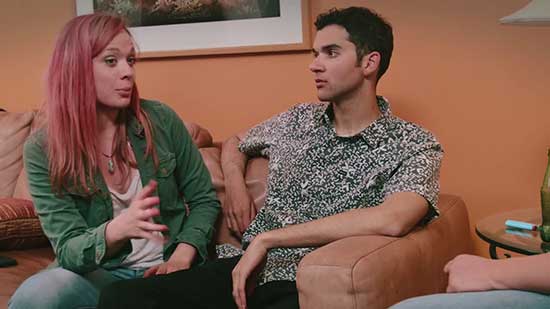 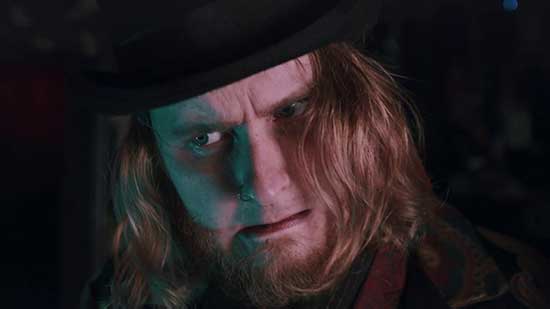 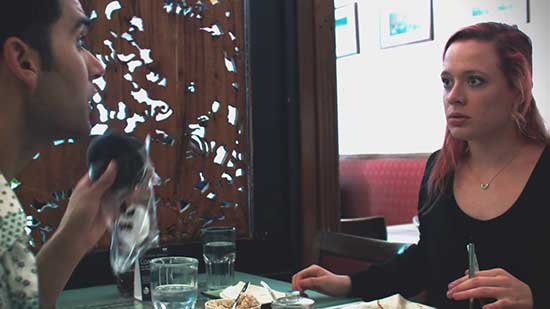 There is promise though when we first meet the aforementioned Grid Gang. Emulating the very worst of Reddit and 4Chan, the Grid Gang are self-aggrandizing twerps whose important life work includes spying on people having sex and bullying YouTube stars to kill themselves in a livestream. We’re all aware of this kind of mob mentality that runs rampant online. Particularly in this current political climate, we’ve seen the aftereffects of warriors of the internet almost destroying people’s lives because of their vehement beliefs that they, and they alone, are doing what’s right for the world. So, in that regard, I’m completely onside with Golding cutting this kind of mentality down a peg or two. Unfortunately, what precedes and proceeds this one scene is crushingly boring. 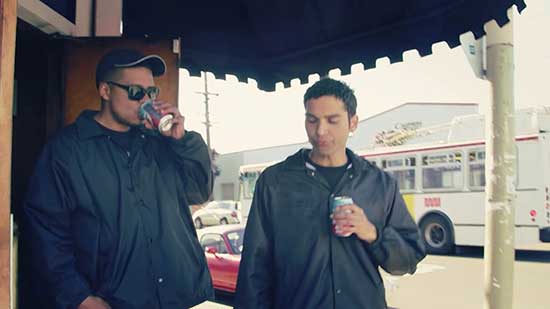 001 Trolling is dense with editing flourishes, overbearing music and flowery dialogue that screams loud and hollow, that it feels like being in actual seizure. Strip it all away and the film reveals itself to be a disjointed affair that doesn’t really have as much bite as it thinks. Largely, that’s because a lot of what it does, at least to this critic, has been done much better elsewhere. 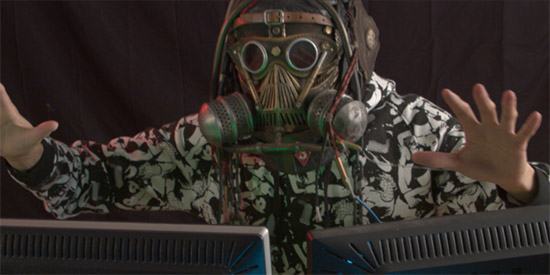 Over ten years ago, Black Mirror creator Charlie Brooker worked with Chris Morris (Four Lions) to create a six-part series about a journalist, played by Julian Barratt, struggling to overcome what he saw as the rise of the idiots in society. A swathe of latte sipping, overly ironic, self-indulgent media darlings led by the titular Nathan Barley. Barley holds raves where he earnestly reads out his beat poetry about people having sex as they jump out of the Twin Towers. He harasses his assistant and uploads his life threatening pranks on YouTube. All the while, he believes himself to be the coolest man in London and everything he did is worthy of attention and praise. In short, Nathan Barley the show covered the same kind of ground over ten years ago more successfully, than 001 Trolling manages to do now. 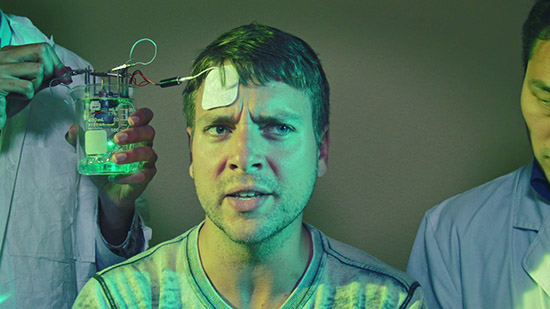 Undoubtedly, Golding is an extremely intelligent man who appears to be bursting with ideas. However, as the lead, director, and writer of his projects, I feel that he’s perhaps sitting too close and with an outsider’s guidance, he may be able to syphon his determination into projects that feel less like they’re trying so hard to be guerrilla film making.