The star of Repo! The Genetic Opera and Songwriters of The Devil’s Carnival embark on a 30-city wagon trail with The American Wake Tour

Cult film composers Terrance Zdunich and Saar Hendelman are no strangers to creating interactive fan events. With their movies, they pioneered a punk rock approach to storytelling and distribution, touring their musical films like rock concerts and cultivating a die-hard fanbase in the process. 2008’s REPO! THE GENETIC 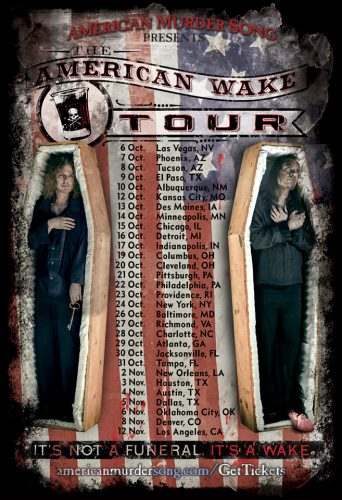 OPERA is still a proud home to shadowcasters and midnight moviegoers worldwide, and with the successful touring event screenings of THE DEVIL’S CARNIVAL in 2012 and ALLELUIA! THE DEVIL’S CARNIVAL in 2015, Terrance and Saar cemented their legacy as masters of interactive music-making. The duo is back with a new project, AMERICAN MURDER SONG, and they’re inviting fans to join them for a live, musical wake.

Starting October 6th, Terrance and Saar are taking to the road in a makeshift casket carriage to embark on THE AMERICAN WAKE TOUR, a 30-city expedition with their latest work. They’re calling on fans to wear their blackest veils and prepare their darkest hearts for an intimate gathering of fine spirits, live music, and grave entertainment. It’s not a funeral, it’s a wake.

On tour, Terrance and Saar will welcome audiences back in time to The Year Without A Summer, conjuring the ghosts and bloody crimes of 1816 America, singing tales of untimely death… and murder.

Each “service” will be up-close-and-personal, with limited coffin room available, so Terrance and Saar urge fans to reserve their space at the wake today: americanmurdersong.com/GetTickets.

As a bonus, all tickets purchased for THE AMERICAN WAKE TOUR include a download of AMERICAN MURDER SONG‘s third extended pay album, III. THE RECKONING. V.I.P. (Very Important Parishioner) tickets, meet ‘n’ greet opportunities with Terrance and Saar, and private body viewings are also available with select ticketing packages to the wake.

In addition to music and touring, new videos are released every Tuesday on AMERICAN MURDER SONG‘s official YouTube Channel: youtube.com/americanmurdersong